In this article I am going to explain High Intesnity Interval Training (H.I.I.T) and its efficacy. The reason for covering this topic is because despite all the research out there, most people are still choosing long sub- maximum intensity cardio as their primary type of training. Too many people go to the gym and jump on a treadmill or elliptical and train for an hour while only slightly elevating their heart rate. Research however, shows this type of training is obsolete to new training methods such as high intensity interval training.

High intensity interval training (H.I.I.T) is a method where the point is to go as hard, fast, or heavy as possible for a short duration and then follow it up with a short rest period. The rest periods interspersed throughout the workout allows the person to recover enough so they have more energy to give during the next high intensity interval. So instead of riding a stationary bike for 30 minutes straight at 15mph, one should instead perform 10-45 second bursts of all out pedaling trying to reach as high of a top speed as possible, followed by a 30-60 second rest period.

It is important to understand the three energy systems used by the body to allow work to be done. ATP (Adenosine Triphosphate) is produced by our body to allow muscle contractions to occur. The quicker ATP is produced the more force a muscle can generate. ATP is made via three different energy systems. These include ATP-PCr system, Anaerobic Glycolytic system, and the Beta Oxidative system.

After reading about the three energy systems it would make sense for someone to think that long cardio is the best way to go to burn fat and lose weight. The problem with this theory is that to lose weight we must burn more calories than what we consume. It doesn’t matter if we are using glycogen (carbohydrates) or fat as our primary fuel source. It all comes down to total caloric expenditure. The best way to burn calories is to elevate the heart rate. Long duration low intensity cardio will only elevate the HR to around 50-60% of max HR. Exercising in short bursts of high intensity followed by low intensity work will allow the HR to achieve levels of 75-85%. Despite the different fuel sources used between the two training methods the total amount of calories burned will be greater with H.I.I.T training. It will also require less total time spent in the gym.

For those of you who still like the thought of specifically burning fat for fuel you must understand that the more glycogen that we burn through H.I.I.T training, the more fat will be burned later in the day. By exercising in short bouts of 6-45 seconds at high intensity we deplete our glycogen throughout the body. After the workout is done the body will now burn more fat due to glycogen sparring. The body will sense that it is low of carbohydrates and will cause an increase in the amount of fat used for fuel. So not only do you burn more calories in less time with H.I.I.T training, but you continue to burn more calories in the next few hours following the workout due to elevated HR and glycogen sparring.

Research has actually shown that 5-10 minutes of bike sprints has roughly the same metabolic demand as 30-45 minutes of long low intense cardio.

20:120sec (20 seconds all out pedaling as fast as possible followed by 2 minutes of very light pedaling) Repeat for 10-15 rounds

Substitute this workout in place of one of your cardio workouts and start seeing results immediately! 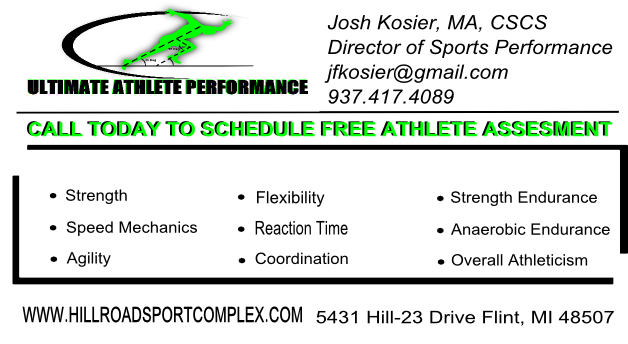