Local AMA-PRO Rider Takes the Gold at the X-Games

Pro-AMA Flat Track Series rider, Bryan Smith wasn’t thrilled with the conditions of the track at the first ever X-Games Flat Track Race. The freshly built track had been soaked with rain and the X-Games teams worked the track all night before the practice heats.  As important and iconic as winning this race would be, Smith also had to think about taking care of himself with the rest of the 2015AMA points series ahead of him this year. With a great start out of the gates, Smith was 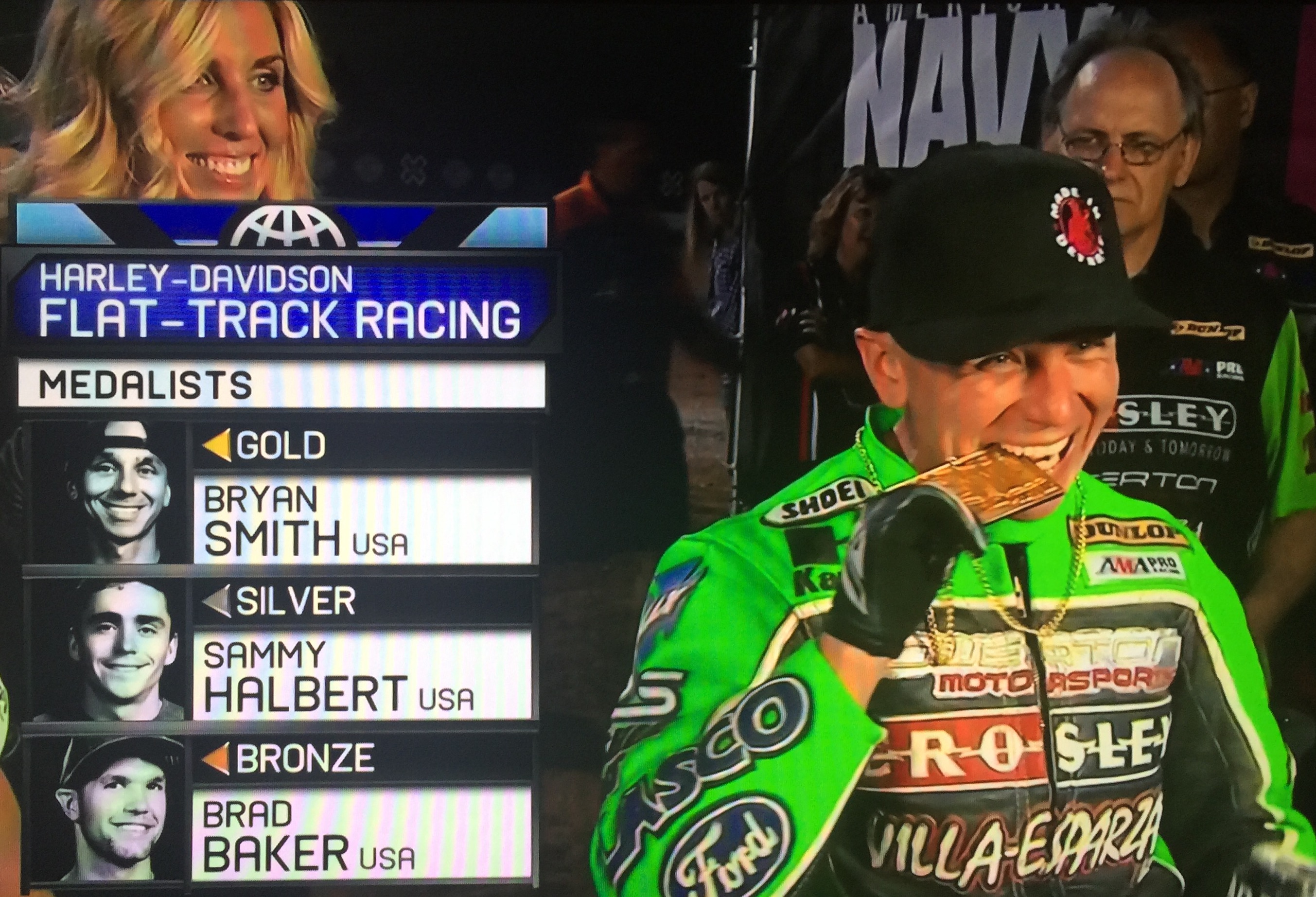 chomping at the bit to snag a spot on the podium. The first X-Games flat track Gold medal within reach, the number 42 Crosley Radio Bike (Smith’s) was pushing the limits and aggressively fought his way up to win the first ever X-Games Gold.  You may or may not have heard of Flat Track Racing, but since the X-Games decided to pick up the sport, you will definitely start to hear more about it. The races have been running in the AMA series for the better part of the last 60 years. Flat Track racing has been mainly an underground sport, dominated and heavily sponsored for the most part by Harley Davidson.  Looking out on the track many brands can now be found out there including Kawasaki(Smith’s current ride), Ducati, and Triumph.  Smith has been racing ever since he can remember. From the age of 7 Bryan was riding Flat Track. Fortunate enough to be surrounded by family and friends that loved racing, Bryan always looked up to family friend and the best Flat Track Racer in history, Scott Parker, also from Swartz Creek, MI.  Parker holds nine titles and 94 national wins, which made him the all-time leader in championships and wins in AMA Grand National history when he  retired in 2000. Parker’s positive influence, and willingness to help others to get involved in the sport helped to fuel Smith’s desire to push forward and devote his life to Flat Track. Completely consumed by the sport, Smith has on more than one occasion, found himself laid up with broken limbs questioning whether or not he was on the right path. If you talk to him about Flat Track for a few minutes and see the excitement for the sport in his eyes, you know that he just loves what he does and is right where he should be.  When talk to Bryan about what exactly Flat Track is, he talks a lot about finesse.   All of the riders have to use the same tires, everyone is getting the same amount of traction. The skill of balancing power 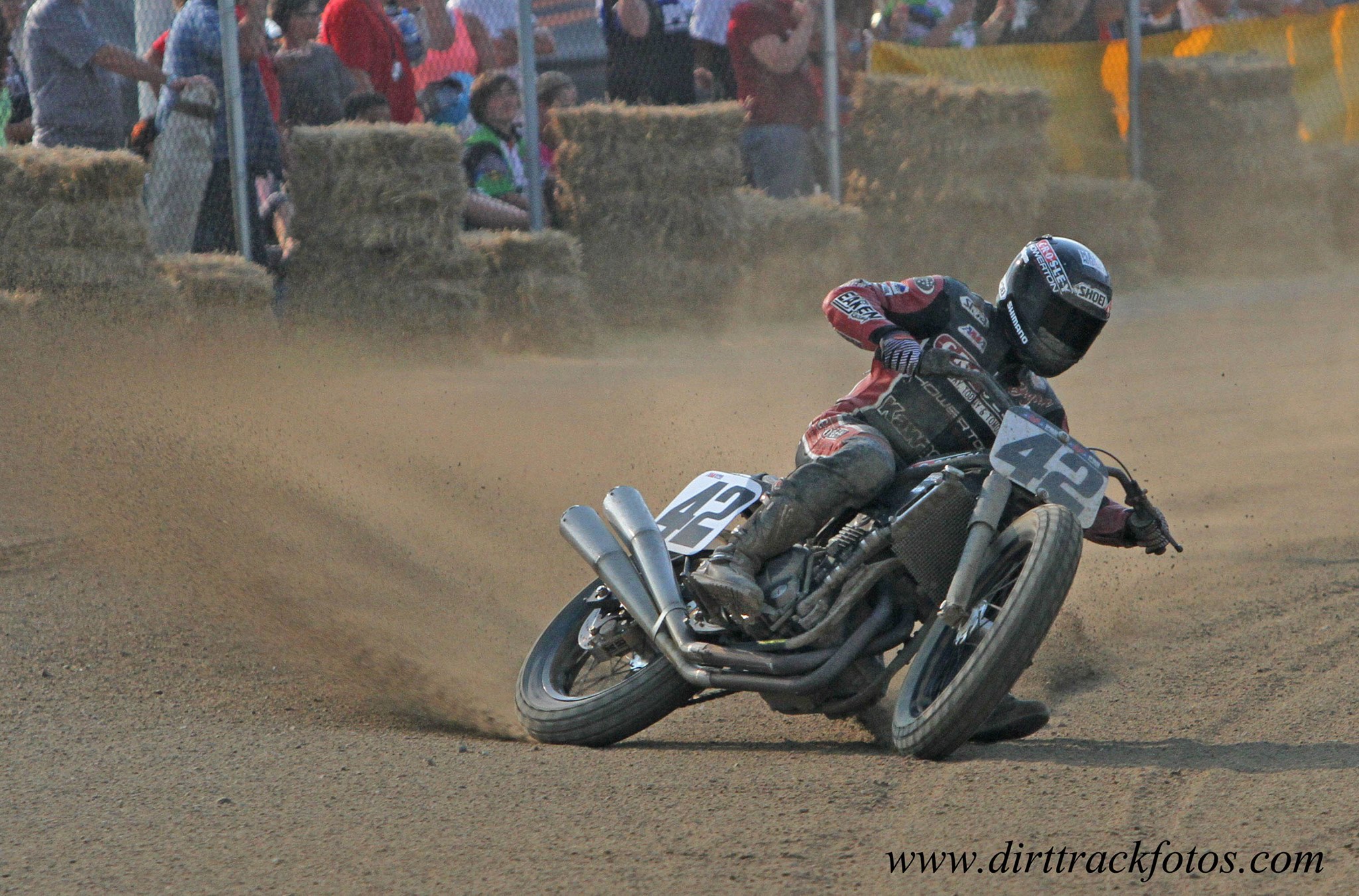 with traction and finding the right lines on the track makes the sport all about skill and less about raw power. Smith describes it is about feeling the movement of the bike and using experience to know where you need to be. As the current points leader in the AMA Pro Flat Track Series, is America’s premier dirt track racing series and is highly regarded as the most competitive form of dirt track racing in the world.  What does the hottest rider in AMA Flat Track racing do to train for these intense 25 mile races at 130MPH? He hits the streets of our towns on his road bicycle clocking over 100 miles a week in Genesee County. Training is a big part of the job when it comes to No one won more races in 2014 than Bryan Smith. He closed out the year last year only 3 little points behind the winner and you better be sure that he is coming to claim top place on the podium in 2015.Beginning in 1954, AMA Flat track held it’s first race in Daytona on a football field. The event was so successful that it began what is now very well known as Bike Week in Daytona.