Sitting outside on a January morning on a beautiful enclosed wrap around deck overlooking Main Street Flushing at Cops and Robbers Ice Cream and Gift Shop. I watch cars carefully cruise down the road to their jobs or to their homes. Even though it is Winter, it’s still nice in a way to be cold . The building was transformed into an ice cream parlor/gift shop from the former Flushing Police station with attention paid to maintaining the original feeling and functionality of the building. Rooms that used to be armories and Sheriff’s offices have now been repurposed into 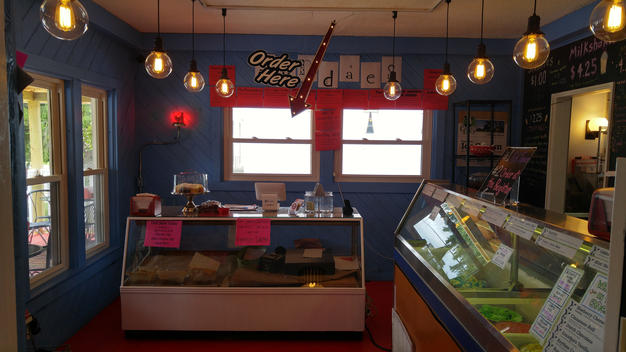 utility closets and rooms to study or just hang out in. But enlarged pictures of the rooms’ history make sure it is not forgotten. With the town being taken by storm by the dairy treat newcomer, I sat down with the owner, Jennifer McDermott, to talk about how all of this came to be.

Flushing has always had two places to go on a sweltering day to get ice cream: Roaring 20’s and Tom and Jerry’s. A few years ago Tom and Jerry’s up and disappeared, leaving a void in the hearts of sweets fans the city over. Jen saw the hole that was left in the community and went to work to do something about it. After a rigorous rezoning process, she went to work repurposing the building to function as a public space, which was minimalistic in a decision to preserve the history and feeling of the building that once housed the operations of the men and women that protected the citizens of Flushing. There’s an old timey feeling of days gone by when police knew everyone’s name, not just the troublemaker’s; a sense of community that comes with the innocence of getting together to go to an ice cream shop that used to be a cop shop.

While most restaurants have what’s called a soft opening, where pageantry and advertising are kept to a minimum to stress test the operation, Jen decided to forgo this convention. She opened the doors on the day of the Summerfest parade in 2015 in the middle of June. The place was swamped. It was hot, but luckily, they were there for frozen treats and everything went smoothly. Since then, they’ve been open 7 days a week from 10am to 10pm scooping cones of delicious Country Dairy ice cream. Stop in and say hello and learn something neat about Flushing while enjoying the tastiest ice cream and stick around to check the place out and be sure to spend some quiet time on the porch if you get a chance.

To find out more about Cops and Robbers visit: www.copsandrobbersshop.com