The aroma of packages of perfume scents the boutique rooms as lace shawls from France and decorated crystal eggs by Jill Garber, one of the top French designers of home décor, beautify the doorway at Pigeon in the Parlour in Holly, Michigan.  Yet this unique “boutique of boutiques within a boutique” offers more to many than a welcoming environment.  It is among the top 10% in the nation for the sale of the famous Chalk Paint® by Annie Sloan.  It offers fashion, home décor, design services and classes.  Emily Rath, owner of Pigeon in the Parlour also says her customers tell her it is a place of sanctuary, peace, life and hope.     The name Pigeon in the Parlour came about when Rath was preparing her boutique to open in 1991 and she noticed a pigeon had been ran over in the parking lot.  Rath took the bird, nursed it and prayed for it in her home.  She named it Pigee had it over 8 years.        Business was great at Pigeon in the Parlour for years after that.   Then, five years ago, Rath was taking 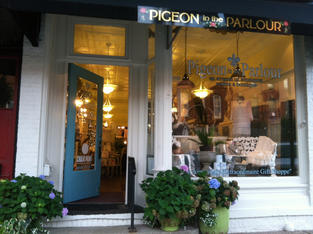 care of her 98-year-old mother.  She sold everything she had in the store to support her.  She leased the shop for a year, and got the lease back.  She and her husband were struggling on Social Security.  On a folding chair, she prayed “Lord, I give you Pigeon in the Parlour.  What do you want me to do with it?” Almost immediately there was a knock at the boutique door.  It was an entrepreneurial woman named Sue VonWald who wanted to lease space in Pigeon in the Parlour.  She became one of eight women who created their own boutiques within the Pigeon in the Parlour boutique.     Von Wald’s boutiques are called The Shed and The Nest.  The Shed features garden white furniture.  The Nest is a continuation of The Shed with a lot of white and remote controlled candles run on batteries.      Other boutiques are Rags, Curious Finds, The Feathered Nest, The Linen Bedroom and Country Antiques. Rags is a reasonably priced fashion boutique illuminated by Italian crystal chandeliers.  Curious finds is a trendy, edgy “New York, New York” style boutique featuring home décor, jewelry, purses, jams & jellies and more.  The Feathered Nest is an elegant boutique with pastel and sparkly items.  The Linen Bedroom is a linen white room featuring items found in a bedroom.  Country Antiques is a nod to the past featuring many one of a kind primitive pieces.      Rath says her most memorable boutique item is a British cabinet.  It was one of her first purchases.  One day, she says, a man was in the store who said he was the one who brought it over from England.  It is priced at $20,000.      Nowadays, Pigeon in the Parlour’s top selling item is its Chalk Paint® in Old White.  The paint was developed 25 years ago with a color palette inspired by 18th and 20th century design and décor.  It’s easy 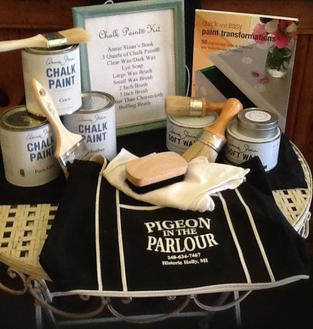 to mix to create even more color possibilities and rarely requires any preparation, such as sanding or priming.  It can be used outdoors or indoors on just about any surface ranging from wood to metal.  It’s non-toxic and contains no lead, near zero VOCs and has no odor.  Although Rath says these days her customers are leaning more towards neutrals, colors range from burgundy to aubusson blue.     Rath offers classes at the boutique for those interested in learning to use Chalk Paint®.  Her newest class is called Pallet to Palette and allows participants to create an original sign using Annie Sloan’s Chalk Paint® and wood.  The other class, she says, is the most comprehensive anywhere and is called Workshop I.  Participants will learn five aging/distressing techniques that will create an antique patina, as well as dry brushing, crackling and working with waxes.  Each class is $95 and includes all supplies.  The classes as a whole are called Creation Station.  Rath says in them “you will explode with creativity.”     When reminiscing on many memorable customers she’s had at her boutique, Rath recalled one woman that took a class.  The woman said she had been an alcoholic and because Rath talked about how God healed her brother of alcoholism she was inspired to seek help and overcame her addiction.  Rath also recalls two women taking the class that had camps for unwed mothers to enjoy leisure activities.  Another woman in the class who had once been an unwed mother heard what the two were doing during class introductions and asked if she could help.  Rath says the stories of encouragement are countless.“This place was built on faith.  He (God) put it together.  I didn’t.  I think people come in and feel the Holy Spirit,” she says.