The Gus Macker 3 on 3 basketball tournament has been delighting both players and spectators since 1974.  The first Gus Macker tournament was held in Lowell, Michigan.  Scott McNeal started the tournaments in his mom and dad’s driveway and held them there for the first 13 years.  The affair is named after him.  Gus is his nickname and Macker comes from McNeal.   The event is now held in

several cities throughout Michigan such as Mount Pleasant, Grand Rapids and Hasting.   In fact, in 1987, the tournament started traveling around the country.  Today it is held in states such as Florida, New Mexico, Iowa, Texas and North Carolina.   The tournament has expanded to 2.2 million players and more than 23 million spectators.         The event’s organizers hope this year’s tournament in Linden, Michigan will be bigger and better than ever.  This will be the second time the tournament will be held in Linden.   “Last year several people said our event didn’t feel like a first time event.  They said it was very organized and very enjoyable,” said Shelly Day, Executive Director of Fenton Regional Chamber of Commerce.    The organization partnered with the Linden Community School Board to make the local affair possible.      The action will take place at Hyatt Elementary School in Linden, located at 325 Stan Eaton Drive.  The dates are June 25th and 26th, with activities beginning at 8 a.m. on both days.  Teams of four players are needed although only three players play on a team at a time.  This is in case one of the players gets tired or can’t play.  Teams are computer matched based on age, height and experience.    Junior divisions are grouped by ages 10 and under, 11-12, 13-14, 15-16 and 17-18.  There is an ages 19-29 adult division, and 30 & over divisions are grouped by ages 30-34, 35-39 and 40 & over.  Players can compete in a free throw contest, three point contest and/or bank shot contest.  Trophies are given for the team’s performing the best.  Toilet bowl trophies, which look like a toilet bowl with the Macker mascot, are given to teams losing their first two games.     “It’s a community event that gathers everyone for a day of basketball contests, a kids’ zone, face painting, food and business booth displays,” said Day.         The kid’s zone is a new addition to the festivities at the Gus Macker tournament of Linden.  It will include a bounce house and other activities for children.   “It gives brothers and sisters of players something to do,” said Day. 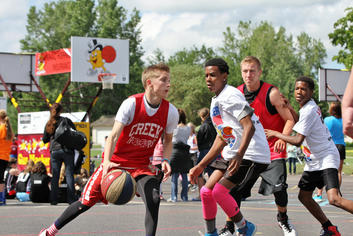 There will be other activities along the river nearby.  The competition is also being held within walking distance from downtown,which has several restaurants and shops.  In addition,  Bryam County Park is within walking distance.  “Fenton is also a nice town about 10 minutes away from the tournament,” said Day.     Besides being fun, Day said the contests have other benefits.  She said they promote positive values such as fair play, teamwork, community involvement and volunteering.  She said being outdoors for an event such as The Gus Macker tournament is healthier than being indoors watching television or playing video games.  Furthermore, the games help raise money for communities.

“All the youth organizations through Linden Community Schools help with set up, tear down, trash collection, registration and other aspects of the tournament.  Gus Macker makes a monetary donation to the organizations for their time,” said Day.  Over $3,000 each year is donated to organizations.    Gus Macker estimates that since 1987 approximately $15,000,000 has been raised for worthwhile local charities nationwide.   Proceeds from the Linden tournament benefit the Fenton Regional Chamber of Commerce.     “The community is very excited.  The sponsorships are sold out.  We’re excited the Linden Community Schools and the FentonRegional Chamber of Commerce can come together to create a fun event that benefits everyone,” Day said.For further information on the Gus Macker visit http://www.fentonchamber.com