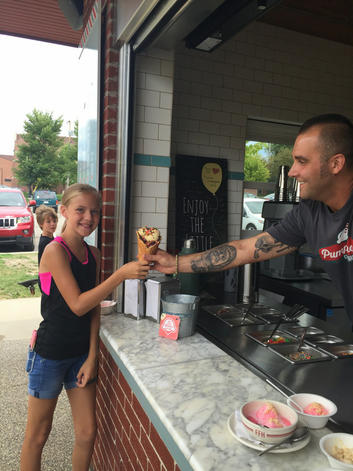 The people of Fenton have always taken pride in our city and its rich history, making every effort to preserve our past for future generations.  Nothing could have endeared us more when Ann Stevenson, Curt Catallo, and Erich Lines turned their focus for a new restaurant on the historic Fenton Fire Hall.  Meticulous attention was paid to every detail in renovation, repurposing as much as possible and perfectly integrating the new.  Even copies of old Fire Hall meeting minutes have been reproduced and enlarged as a pieced together wallpaper.  Handmade taps adorn the upper and lower bars with a total of 48 beers on tap.  The lower level also features an amazing speakeasy bar.  Comfortable leather seating invites you to chat with friends beneath the warm glow of filament bulbs that are a part of every fixture in the restaurant.  The rooftop beer garden offers a beautiful view of the city and river with additional seating and cafe lighting.  To utilize every space, there is patio seating in the front and back of the restaurant.  Walking in at street level, you will notice live edge wood tables in a large, open eating space that centers around a large, open, wood fired grill.  We had the pleasure of speaking at length to Aaron Cozadd, Executive Chef and Greg Arnett, Chef de Cuisine.  Aaron has been a part of the Union Joints family through many additions and has studied at the Culinary Institute of America in Hyde Park, New York.  As Aaron gave us the tour, his pride and enthusiasm was apparent.  He explained everything from the year long renovation process to how he has based the menu around the custom grill.  Much of what is on the menu has been touched with the warm flavors of hardwood smoke.  Cozadd explained that his roots were as a fine dining chef.  He has now evolved that aspect and applied the care and quality of fine dining into casual fare. 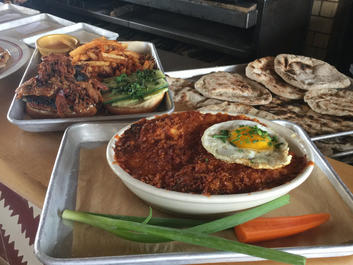 During the meeting, we sampled two of the most popular dishes; the Korean tacos and the Yeti Mac.  The tacos, a trio of tender pulled pork with a housemade Korean inspired sauce balanced with a crisp and fresh cilantro lime slaw and the peppery flavor of thin sliced radishes, all served on Detroit made flour tortillas were nothing short of amazing.  The restaurant is known for its featured Mac & Cheese, and the hype delivers.  The Yeti Mac is the marriage of two rich cheeses blended with Penne, house made sausage Michigan maple bacon, and the kick of pickled chiles.  The crunchy top is covered by a perfectly fried egg.

We were also given one of the Fire Hall’s best kept secrets, The Banh Mi burger.  It is all about balance with the ground pork patty, Korean pulled pork and open grilled ham topped with a spicy pickled jalapeño and sliced carrot blend, cool, fresh sliced cucumber, cilantro and sour cream on a quality bun.  It is an ample serving but too good not to finish.  My personal favorite is the Wood-Grilled Shrimp Pizza.  This is a newer addition to the menu and toppings are on special, rotating every two weeks.  I will be returning for the wood grilled shrimp, roasted red peppers and 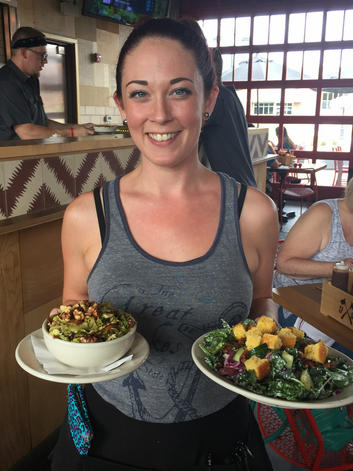 onion.  The “wow” factor came from the creole bechamel sauce and the smoky, crispy, handmade crust.  The addition of munster cheese and a generous amount of fresh scallions made this dish impossible to not come back for more.

This is far from where it ends.  The bar menu features signature cocktails, created by Shane Collier, Manager, using house made shrub with the freshest ingredients.

And last, but far from least, we were treated with a demonstration of how Nitrogen ice cream is made by Cozadd, himself.  Two years ago, the Fire Hall renovated a small building just steps away from the restaurant right next to the river.  It has been drawing a crowd ever since.  Cozadd explains that the ice cream base would freeze more like a sorbet by conventional methods.  By adding -325 degree liquid nitrogen, the base freezes faster and with smaller ice crystals, resulting in a creamier, decadent frozen treat.  It was stressed that the Nitrogen is food safe.  Flavors are creative and delicious again, with a distinct nod to Michigan culture with flavors like Blue Moon, Faygo Redpop, and Michigan Blueberry.  There are menu staples but you can look for new favorites to pop up every two weeks.  As Cozadd hand mixed a sample of the Faygo Red Pop, he also pointed out that having nut allergies, himself, he has recognized the importance of keeping all ingredients and serving utensils separate and safe for all.  Not to be forgotten, there is always a gluten free, vegan option that is made with a coconut milk base.  Currently it is a blend with Michigan blueberry and it is refreshing and delicious regardless of diet restriction.  Samantha and Emily happily served small samples of several flavors, my top picks being Salted Caramel and Carrot Cake. The Faygo Redpop and Fruity Pebble/Rice Krispie flavors took me back to my childhood, especially with a pop rock topping.  The made-fresh waffle cones entice passers by with the most delicious aroma. 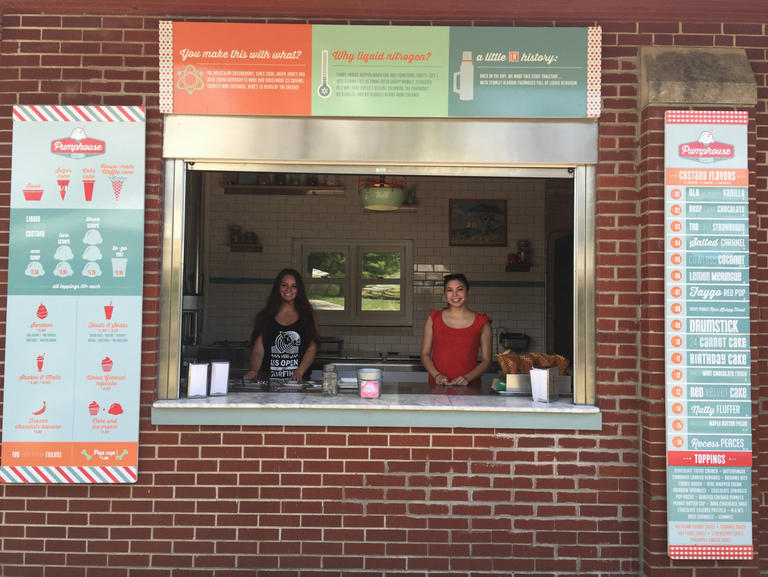 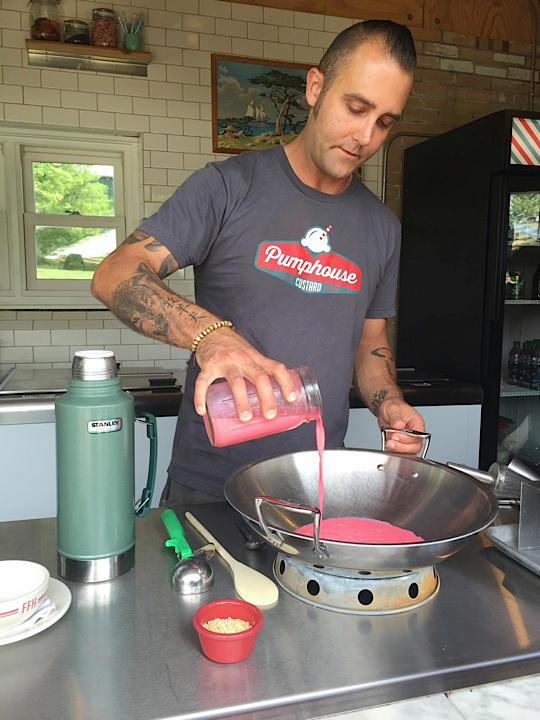 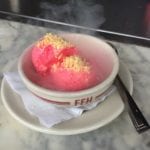