The Fenton Winery and Brewery, located at 1370 N. Long Lake Rd. in Fenton, is a family owned business that has been in operation for eight and a half years.  The owners, Matt and Ginny Sherrow, both Waterford, Michigan natives, have each enjoyed living in Fenton for over 10 years.  The FWB is known for its great atmosphere, staff, food & drinks and special events.
“We’re a community winery and brewery.  We have mug and stem clubs where customers have their own (beer) mug or (wine) 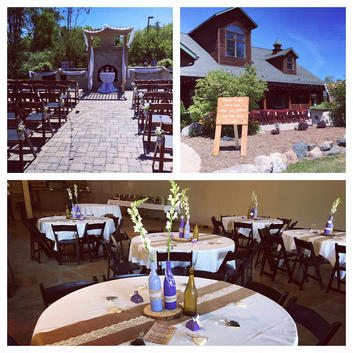 glass to drink from when they visit us again,” said Ginny Sherrow.  The clubs also feature discounts on beers and wines for its members.
She explained more about why the couple decided to open such a business.  “My husband and I had a passion for the industry and enjoyed all the different flavors and experiences that can be had while exploring wine and beer,” she said.  Another of Ginny’s passions is finance.  She is in charge of all finance matters for the FWB.  Matt is an automotive engineer turned wine maker/beer brewer.  He is in charge of the business’ production operations.   College marketing and entrepreneurship classes inspired him to open a small business.  When they started the business they were located in a strip mall, but now they have their own property.
About 70% of FWB visitor enjoy their drinks in the business’ taproom.  “The taproom is so cozy that people really like being in the taproom.  The taproom features warm colors, industrial action and being right near the tanks that make the beer (and the winery)” Sherrow said.  So, guests can see the equipment up close there.  The taproom is open six days a week, Tuesday-Sunday.
About 30% of FWB visitors enjoy their drinks in the Wine/Beer Gardens.  The garden features a casual, park like setting with over an acre of walkable space to enjoy the weather, get some nature and even play outdoor games.  Some of the games offered at the 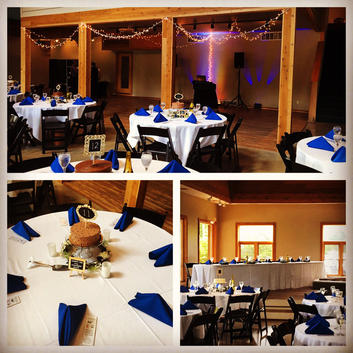 garden include cornhole, giant Jenga and ladder golf.  The Wine/Beer Garden is also open six days a week, Tuesday-Sunday.
The banquet facility is a private function venue in which hosts pick their own menu.  It seats about 280 people and provides a beautifully rustic feeling.  There also an outdoor patio area complete with a stone fireplace and an area for seating up to 150 people.  The outdoor and indoor settings are both perfect for weddings, graduations, proms, anniversary parties, receptions, birthday parties, showers, fundraisers, rehearsal dinners, reunions, holiday parties and conferences.  The FWB staff hosts about two events a week in the banquet facility in the summer, including many weddings.  The FWB staff hosts about three events a month in the colder months, including a lot of holiday parties in December and January.
The staff is another thing that makes FWB unique.  “The bartender Laura provided friendly and personable service and did a great job.  We will definitely be back,” said Marc Miller, FWB visitor.  Chefs design complete menus featuring delicious entrees, tasty appetizers and luncheon or casual foods to fit most banquet or taproom/garden dining needs.  A chef, along with an on-site banquet coordinator, work with every bride & groom or host to create perfect events.  The banquet coordinators specifically provides tours of the facility, develops packages and pricing, connects couples with outside vendors, assists with onsite tasting of FWB’s food and beverage options and coordinates every detail of the set-up for the ceremony and reception.  With the FWB staff, it is no wonder guests keep coming back.
Sherrow said the pizzas at FWB are also quite famous due to the recipes the chef has created.   Ingredients for the pizzas include prosciutto, fig preserves, fresh basil and house-made sauces such as double cream stout blackberry merlot.  Another favorite food at FWB is the cheese bread, which is made with truffle oil.
Wines are offered at FWB by the sampler tray, glass and bottle.  There are 20 wines to choose from year-round, as well as seasonal and specialty wines that are released throughout the year.  Sherrow said the most popular wine is probably the Solo 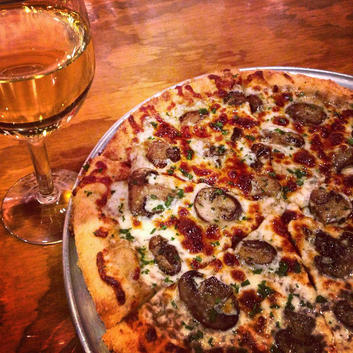 Blackberry Wine because of its fresh taste.  Other favorites include white wines such as Seven Lakes White (Chardonnay) and Orange Label White (Sauvignon Blanc), red wines such as Holly Nouveau (Bergamais) and Fenton Red (Merlot), blended wines such as Green Apple Riesling, and specialty wines such as Cocoa Chocolate Merlot.  The Fenton Winery & Brewery also offers barrel aged red wines and dessert wines.  The business uses a large selection of grapes for its wines.  Growers from California ship the grapes, including deep reds.   Some of the restaurants FWB supplies wines to include Beale Street Smokehouse BBQ, Boston’s Restaurant & Sports Bar and Fenton Fire Hall, all in Fenton.
FWB is currently a keg only facility.  So beers are on tap only at the bar, which is the preference of many beer aficionados.  Throughout the year, FWB also offers limited quantities of popular styles in bottles in the taproom.  The most popular beer at FWB is Eminent Double IPA (India Pale Ale) because of its bold flavor, Sherrow said.  FWB also offers many balanced brews such as Summershine Wheat (American Wheat Ale), high gravity sippers such as Staggering Bull (Imperial Nut Brown Ale) and seasonal brews such as Bloomin’ Berries, which is available now only in the taproom.
The FWB staff also participate in many events in the community, such as festivals in which they serve beer and wine.  One such festival is Taste in Fenton, to be held August 4.  Another upcoming festival FWB staff will be participating in is Sights, Sounds & Tastes of Holly which will be held August 6.  “We will continue to innovate our offerings by creating new recipes.  We will also continue to find new events in the community and create new events to host on our property such as wine & beer tastings involving other wineries and breweries,” Sherrow said.
According to the local business’s visitors, of whom about 90% return, The Fenton Winery & Brewery is the total package.  It offers a beautiful setting, pleasant staff, wonderful foods and drinks and participation in special events.  “The food was top notch, the s’mores station was too cute, and the cupcakes were outstanding.  Great service and a really neat all around experience.  We even got a kick out of the piano accompaniment.  This really was an unexpected treat in our own backyard,” said Tracy LaForest, FWB guest.
The banquet building features a wooded setting that will compliment any event, as well as helpful banquet and event coordinators.  “Our taprooms and outdoor garden provide a very relaxed and casual atmosphere where guests come and get craft beverages (and food) made on-site from knowledgeable bartenders (and staff) who know their name,” said Sherrow.Fore more information on the Fenton Winery & Brewery visit: http://fentonbrewery.com/ 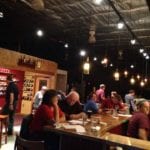 Flint Diner Serves Up a New Twist on Burgers

Andiamo Restaurant Group Partners with ClubMx for Motocross in Michigan