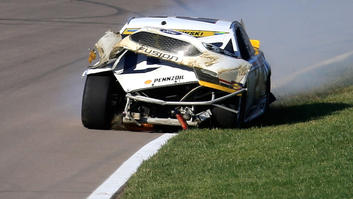 After a poor showing at Charlotte, Kevin Harvick was not in a must win situation, but getting the victory at Kansas in the Hollywood Casino 400 eliminated any worries going to Talladega next Sunday.  So with Jimmie Johnson and Harvick now locked into the Round of Eight, 10 drivers will battle for the six remaining spots at the most unpredictable racetrack on the NASCAR Sprint Cup Circuit.For the Fords of Team Penske, the race was a reversal of last week’s fortunes. Joey Logano, who experienced issues at Charlotte, had a solid day at Kansas to finish third and now sits on the cut line tied with Austin Dillon 13 points behind Martin Truex Jr. who holds the 7th position. Brad Keselowski, who finished seventh at Charlotte, crashed after contact with fellow Chase competitor Denny Hamlin and came in 37th. Hamlin sits in 10th, six points behind the cut line, Keselowski is 11th, but only seven points behind Logano and Dillon. Chase Elliott experienced tire issues and dropped to 12th, 25 points below the cut line and will have to win next week to advance.Matt Kenseth, plus 29 over the cut line, is a virtual lock to advance. Kyle Busch (+27) and Carl Edwards (+24) appear safe, while Kurt Busch (+17) and Truex Jr. (+13) should also lock in spots barring a Talladega disaster.  Of course “the big one” can jump up and bite anyone of the competitors ruining their chance to advance; it should be interesting to watch and see who chooses to play it safe and who lets it all hang out in an effort to move forward to the next round.

Harvick Makes it 3 Straight Winning the TicketGuardian 500 at Phoenix