Brad Keselowski had the dominate car, leading 90 laps of the Hellmann’s 500 at Talladega Speedway, but his engine expired with less than 60 laps remaining and the number two Ford Fusion failed to advance to the round of eight in the Sprint Cup Chase playoffs. Joey Logano, Keselowski’s Team Penske teammate had an early pit mishap when his car left pit road dragging the jack that lifts the car during tire changes. Logano swerved his car from side-to-side trying to dislodge the equipment which would likely have brought 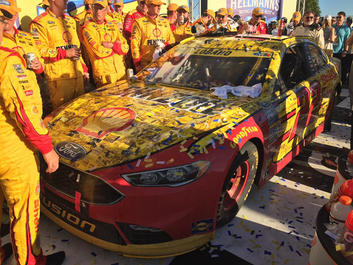 out the caution flag, but the jack remained lodged under the driver’s side of the car all the way around the track resulting in the need to return to pit road. With the jack removed, Logano returned to the track almost a lap down, a fortuitous caution a few laps later saved him from going a lap down. When Keselowski’s engine blew, Logano quickly moved to the lead and lead for the final portion of the race holding off the Ford of Brian Scott who finished second. Ricky Stenhouse Jr. and Aric Almirola finished fifth and eighth respectively to place four Fords in the top ten.With the win Logano joined Jimmie Johnson and Kevin Harvick as automatic qualifiers into the round of eight. Matt Kenseth, Carl Edwards, and Kyle Bush ran at the tail end of the field all race long to stay out of the “big one” that never occurred. They advanced to the next round by virtue of points accumulated at Charlotte and Kansas. Kurt Busch finished fourth and also made the round of eight. Denny Hamlin finished third, a mere 18 inches ahead of Busch, Austin Dillon finished ninth to tie Hamlin for the final advancement position. Hamlin moved forward, his third place finish topped Dillon’s sixth place at Kansas, the tie-breaker being the best finish in this three-race segment of the Chase.The round of eight begins next week at Martinsville, continues at Texas, and finishes at Phoenix where just four contenders will be left to fight it out in the final race of the season at Homestead. Logano remains the last Ford standing and will look to keep his championship dream alive with one more win in the next three races.