Martin Truex Jr. won for the second time in three weeks by dominating the late stages of the Citizen Soldier 400 at Dover International Speedway, establishing himself as the clear favorite in the Chase for the NASCAR Sprint Cup. Team Penske drivers Brad Keselowski and Joey Logano continued their strong playoff run of solid finishes with Keselowski capturing fourth while Logano took the sixth spot, the last driver on the lead lap at the checkered flag. Jimmy Johnson looked like the car to beat during the first half of the race until a mistake on pit road ruined his chances at a victory. Johnson’s pit crew came over the wall too early resulting in a drive through penalty that dropped the 48 car from the lead lap, a disadvantage that Johnson was unable to overcome.Tony Stewart was eliminated from the Chase as Austin Dillon picked up the final qualifying spot in the Round of 12 with his eighth place finish. Stewart joined Jamie McMurray, Kyle Larson, and Chris Buescher as the four drivers failing to advance. McMurray, who was battling Dillon for the 12th position, saw his chances go up in smoke as his engine expired just before the halfway point. The next round begins in Charlotte with a Saturday night shootout and given the manner in which Truex Jr. dominated the 600 in May, he remains the odds-on favorite to continue advancing as the next three races cut the field to eight championship contenders. 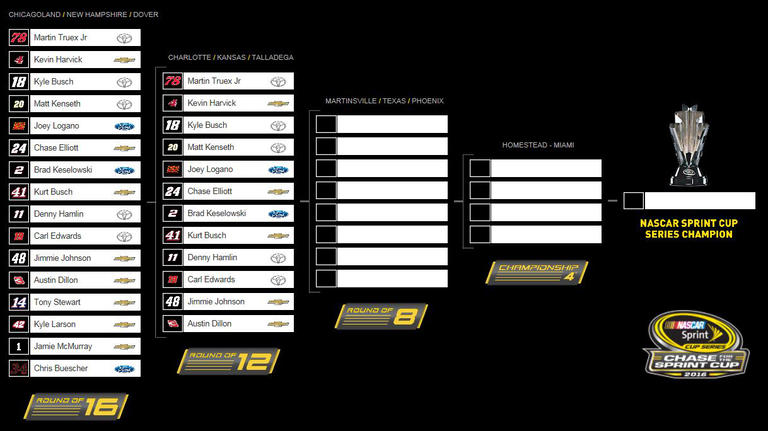 Denny Hamlin Gets First Win of the Year at Darlington