The Hagerman family has been active in the redevelopment of Flint and the surrounding region for decades.  Many people in the area know of Diplomat Pharmacy, which started in Flint as a community pharmacy called Ideal Pharmacy in 1973.  Dale Hagerman took ownership of the pharmacy in 1975, renaming it Diplomat Pharmacy.  He was later joined by his son, Phil Hagerman.  Today, Diplomat Pharmacy is the largest independent specialty pharmacy in the US, with 2013 revenues of more than $1.5 billion.  The business employees over 1,500 workers in Flint.      Some people are less familiar with the Hagerman family’s other affairs, such as the work done through Sky Point Ventures, owned by Phil and Jocelyn Hagerman.  Sky Point Ventures started its activities in 2013.  The firm invests in places, people and ideas. 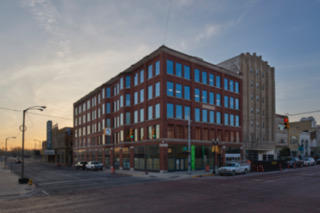 However, it is not a full-fledged investment firm, according to the business’ managing director, Bryce Moe.  “We’re a specialty venture capital firm that looks for unique opportunities,” he said.  There are two sides to Sky Point Ventures:  the real estate investment side and the portfolio company side.  The business has helped dramatically improve the Flint region in the past, is making the area better today and will continue to encourage major development in Flint & the surrounding  communities in the future.     The company’s first project was the renovation of the Dryden Building.  The building was built in 1902.  For years, it was at the center of downtown Flint’s lively retail scene.  It housed several tenants, such as J.C. Penney.  However, in the 1970s and 1980s the Dryden Building lost its retailers.  Skypoint purchased the building in 2013.  Skypoint renovated, restored and created spaces for various businesses within the once iconic building.  The upper floors of the structure began housing Skypoint’s headquarters.     Another place Skypoint invested in was the Fenton Bean Company.  Built in 1856, the half acre Fenton structure was once home to a grain elevator and a meeting place for the agricultural community.  Over the years, the building was turned to a diner, tea shop, pub and an antique store.  Eventually, it was left vacant.  Skypoint purchased it in 2015 and connected to entrepreneurs Jesse Anderson and Nick Brown.  Together, they were able to transform the building to Red Fox Outfitters.  The shop sells products for running, hiking, fishing, camping and paddling.     Today, Phil Hagerman, who grew up in Fenton, still lives there with his wife, Jocelyn, a native of Michigan’s upper peninsula.  Moe, who has traveled around the world, now resides in Flint.  The Hagerman Foundation, established by Phil and Jocelyn, offers 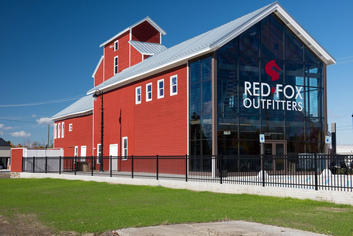 grants to charitable organizations that demonstrate a strong connection between their mission, programs and/or projects and the values of community, education and/or family.  The organization supports the YMCA, University of Michigan-Flint, The Crim Festival of Races and many other events and causes.  In fact, the couple are the 2016 winners of The State Bank Contribution to Education Award.     In addition, Skypoint Ventures has five portfolio companies.  The companies are Article One, iSourceWorldwide, Power2Practice,Hopspot and Coliant Group, LLC.  Article One’s headquarters are currently in the Dryden Building.  The owner of the company, Wes Stoody, discovered Vitamin A deficiency and its impact specifically on children while he was doing a research paper in college.  Vitamin A deficiency can cause blindness, increase disease & infection that causes death and mostly affects those in developing countries.  So, when an individual buys a frame through Stoody’s company a significant donation is made to fund Vitamin A supplements.  In fact, each frame purchased saves two lives.     Another portfolio company Moe said he believes will make a difference in the future is Power2Practice.  The company offers integrative medical software.  “They’re gonna be impactful in the healthcare industry, from helping docs run their practices better; be more effective in what they’re doing, to lowering healthcare costs, and at the end of the day, what’s most important, improve patient experience,” he said.     Another of Skypoint Venture’s portfolio companies, iSourceWorldwide, is moving to the Dryden Building.  The Flint Journal recently said the company would bring more than 100 tech jobs to downtown Flint.   Moe talked about why the company’s future impact would be greater than the jobs.  “It started an environment of tech and innovation and you’re starting a drive down here.  So, everything kind of pinnacles out and grows. ..From the sandwich shop in downtown to the dry cleaners that support the workers.  (Also) we’re creating a talent base here.  We’re creating a new skill set.  We’re gonna be known to have this kind of labor base here.  So, yes, you talk about 100 jobs, but really it will be much larger than that.  It’s just not iSource.  They’re the ones taking the plunge.  Now that they’ve done it, they’re an example for others to follow,” he said.

JUMP IN THE SADDLE WITH WIND WALKER FARMS!