Joey Logano knew it would be a battle until the final lap of the Can-Am 500 at Phoenix International Raceway to qualify for the Championship round of NASCAR’s Sprint Cup, but the rollercoaster of emotion had to be a strain on the young Team Penske driver. Logano started fourth and had only run one-half of a lap when Kyle Larson spun under him and banged the side of Logan’s Ford 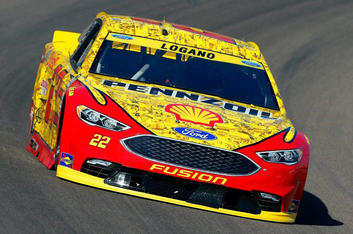 Fusion. The contact dented the left rear fender and rubbed the Goodyear logo off the side of the tire. Logano’s crew made the decision not to pit which would have given up track position, but would have assured the car was safe to continue. The tire lasted to the first pit-stop and Logano held onto his track position, at the front of the field, which he was able to maintain throughout the race.Having dodged a bullet at the beginning of the race, and battling to stay near the front for most of the afternoon, Logano’s only difficulty occurred during long green flag runs when the handle seemed to go away. Excellent pit work helped Logano regain positions lost on the track and keep him a top five car until the finish. As the laps wound down Matt Kenseth held the lead and looked certain to advance, Alex Bowman, subbing for Dale Earnhardt Jr., ran second, and Kyle Busch was third. Logano, running fourth was tied in points with Busch, but would advance based on the best finish of the round tie-breaker. With less than 10 laps to go Logano’s position was threatened by Kevin Harvick, if Logano was passed by Harvick Kenseth and Busch would advance while Logano would miss the chance to run for the championship by a single point. Matt DiBenedetto cut a tire and hit the wall bringing out a caution flag with just two laps to go, the battle for the final two qualifying spots would go into overtime at the one-mile race track in the Arizona desert.At the drop of the green flag the drivers at the front of the field scrambled both for the win and to qualify for the championship race. Kenseth led, but received a bad call from his spotter that he had cleared Bowman as they headed to turn one. As Kenseth dropped to the bottom of the track he made contact with the 88 car and spun into the outside wall, effectively ending his chance for victory and eliminating any possibility of advancing to the final four. In the scramble Logano took the lead and held the top spot when the caution waved for Kenseth’s wreck. On the final restart Logano speed into turn one easily outdistancing Kyle Busch who followed in second. With Kenseth out of the picture, Logano and Bush captured the final two championship qualifying spots with their one-two finish.Now it all comes down to one race for the Sprint Cup trophy. With the championship on the line, Logano, Carl Edwards, seven-time champion Jimmie Johnson, and defending champion Kyle Busch will slug it out to see who earns the right to be called NASCAR Champion.