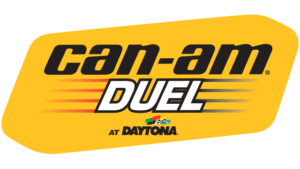 Thursday night at the World Center of Racing, the lineup for this Sunday’s Daytona 500 was settled. The Can-Am Duel races determined the starting order behind the front row of Chase Elliott and Dale Earnhardt Jr. Winning the pole does not always translate to a car that is competitive in the draft. Chase Elliott posting the fastest time in qualifying and showed he has a dominate race car by winning the first of the two races in a convincing manner.

The Monster Energy NASCAR Cup Series drivers ignored the conventional wisdom of “play it safe” during these preliminary events to The Great American Race. Drivers showed a willingness to take chances and mix-it-up competing for top spots in the field. Fans hope this elevated level of aggression carries into Sunday’s event. While drivers showed more give-and-take as the cars jockeyed for position, clearly being at the front of the pack drove the tempo of the action. The willingness to fill a hole and advance a position was tempered only by the desire to avoid the big-one. No one wanted to go to a back-up car for Sunday because of a crash.

Driver interviews after each race indicated a significant percentage of the field believes they have a car that can compete for the win. To earn a trip to Victory Lane in the 500, running near the front of the pack is a necessity. In addition, the scramble for points awarded to the top 10 finishers in each race heightened the competition. Expected the same intensity to be displayed at the end of each 60-lap stage Sunday.

Surprisingly Joey Logano, last year’s top Ford driver, struggled to find drafting help and will start from 15th. The Wood Brothers Ryan Blaney made some of the most daring moves of the night in driving to the lead in Duel two. Unfortunately, he tangled with Jimmie Johnson in a late race fender bumping incident and had to pit for minor repairs. Blaney will start Sunday from 36th.

While an understanding of the draft is always a key to winning Daytona, side drafting seemed to be a huge factor in determining which cars advanced their positions most frequently. With many cars showing good speed at the head of a line or pushing another car to the lead, the side drafting experts could mute the advantage by stealing their momentum. Leaders drove looking in their mirrors to make sure they blocked the fastest moving line from overtaking them. All the maneuvering high and low is sure to produce some exciting action for Sunday’s Super Bowl of stock car racing. Coverage on the Fox network begins at 1 pm with the green flag scheduled to drop at approximately 2-2:30 pm.