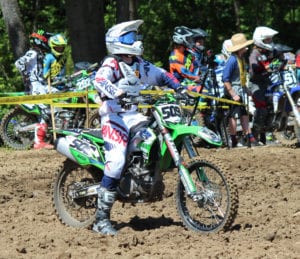 One local amateur athlete has earned the opportunity to compete for a national championship in the sport of Motocross. Ryan Valade, from Fenton, will be traveling to Tennessee this summer for a shot at the ultimate prize in amateur motorcycle racing.

Truthfully, when this assignment hit my desk I was not sure an amateur motorbike race was that big of a deal. Dirt track motocross looks exciting, the action is frequently wild. Occasionally when channel surfing, I’d catch some of those crazy guys hitting the high-flying jumps. But, I confess to not having a good understanding of the sport. After a bit of research, I now appreciate the significance of these rider’s accomplishments. 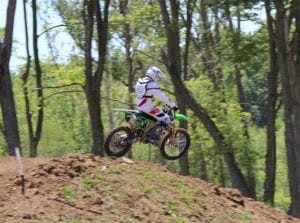 Ryan Valade began racing motorcycles at the age of seven. That first year he qualified for the national championship in his age class. For 11 straight years, Valade made the trip to nationals but never posted a win. Then life interfered, running a business, making a living, those responsibilities take up a lot of time. Racing took a back seat.

Motocross racers are incredible athletes. The physical aspect of riding a motorbike over bumps, jumps, and sometimes other riders is often overlooked. The impact to a rider’s joints, tendons, muscles, and internal organs demands a level of fitness and conditioning most people cannot envision. The physical toll on a rider’s body is significant, bumps and bruises are a common occurrence. Severe injury is an ever-present danger. 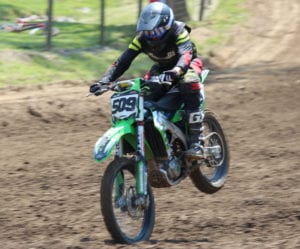 Ryan Valade is the General Manager of Grand Blanc Mitsubishi. The car business can be a very time demanding profession. Ryan may have put his racing career on the back burner to achieve career goals. But, the fun of riding motocross never dimmed. According to Ryan, “In the past couple of years, the guys I ride with have pushed me to be more competitive. After the age of 40, the body does not respond like it does when you are younger. I ‘ve had to assess my lifestyle and reset some goals to get back into racing.”

Ryan credits joining CrossFit Tuebor West of Fenton with re-lighting the competitive fire he relied on during his youth. “CrossFit has certainly improved my conditioning and stamina. But, it has also brought out that internal drive to excel. I compete against myself to do better. I even find myself competing against other CrossFit members to exceed their fitness levels.” 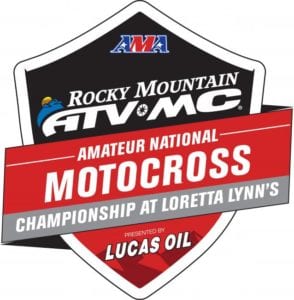 The Rocky Mountain ATV/MC AMA Amateur National Motocross Championships presented by Lucas Oil are run each year at the Loretta Lynn Ranch in Hurricane Mills, Tennessee. To qualify, a racer must earn a spot in the National final. Competition starts at 54 area sites where the top eight finishers in each class advance. Over 22,000 participants nationwide filed entries to compete. Now that is a “Big Deal.” 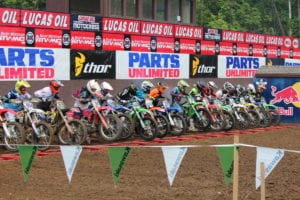 Riders that advance from the area qualifiers earn a spot in regional races. The top six finishers in each class advance from the regionals to 36th Annual Rocky Mountain ATV/MC AMA Amateur National Motocross Championship presented by Lucas Oil at Loretta Lynn Ranch. An area race consists of two heats with the best average finish determining who moves on. Regional races run three heats, again with the average finish being the determining factor. Ties are broken based on how the rider performed in the final heat race.

Valade entered the Mid-East Region Area Qualifier on April 22nd of this year. The event was held at the Wild Cat Creek MX track in Rossville IN. Ryan entered the Vet Class (30 years & older) and the Senior Class (40 years & older). He finished fifth in the Vets and third in the Seniors. Thereby advancing to the Regionals in both classes. 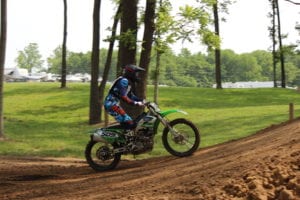 Regional events are held at tracks that host the AMA Lucas Oil Professional Circuit. For Ryan that meant racing at the Ironman Raceway Mid-East Amateur Regional in Crawfordsville, IN. Competing against younger riders in the Vet Class Ryan finished 14th. Good enough to earn an alternate spot in the finals. If enough riders are unable to make it to Tennessee, he will have the opportunity to compete in that class.

Looking to lock up a guaranteed qualifying spot in the Senior Class Ryan prepared for the three heat races. For riders 40 and older the competition is open to former professional motocross riders. Ryan would face two such competitors in his heats.

Race one started with Ryan getting the hole-shot and jumping out to the lead. But, a collision in the first turn sent him to the rear of the field. In four laps Ryan raced from last place to a third-place finish. In Race two Ryan took the second position directly from the start. He held onto that spot until being passed mid-race. Again, finishing in the third position. Even an average finish in the final heat would likely qualify Valade for the National Finals. Ryan started race three in third. He battled to the lead and swapped positions with the two former professional riders. Another third-place finish provided Ryan the opportunity to advance to the AMA Amateur National Motocross Championship. 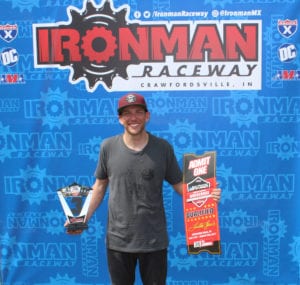 The week of July 31st to August 5th, Valade will be at the Loretta Lynn Ranch in Tennessee. He will be competing against 39 other riders in the Senior Class final. Follow Ryan on MXSports.com with live racing action streaming on RacerTV. And yes, given the significance of the event, The Lasco Press will be on-site to cover Ryan’s efforts. We wish him well and hope the August headline reads, “Fenton Man Excels at Rocky Mountain Motocross Amateur National Championships.”

Ryan relies on sponsorship to help fund his racing efforts. You can support Ryan by patronizing his sponsors. They are Lasco Ford, Mid-Michigan Crushing and Recycling, Answer Racing, Magnum Distributing, CrossFit Tuebor West of Fenton, Mandingo Pickles, Mafia Moto Crew, 100% Goggles, Pro Taper, and GPF MX. If you would like to sponsor Ryan for his trip to the National Championships contact him directly at rvalade508@gmail.com.

Atlanta Proves to Be the Best NASCAR Cup Race of the...