Sonoma Raceway hosts the Monster Energy NASCAR Cup Series race once a year. The track in the rolling hills of California’s wine country has done so since 1989. Prior to Sunday’s event, Ford has seven victories at the track and never a repeat winner. In today’s race, Kevin Harvick(4) became the eighth different driver to pull a Ford into Sonoma’s Victory Lane. The win, Harvick’s first of the year on the Cup circuit, is also his first at the road course track. 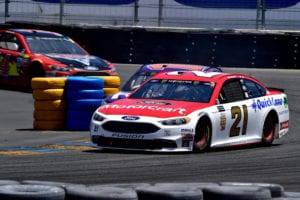 Pre-race speculation focused on road course stage racing and pit stop strategies. As it turned out a conventional approach to pit stops put Harvick in the position to take the checkered flag. Martin Truex Jr.(78) captured stage one, his 11th stage win of the year. The significance of Truex’s stage dominance shows in the points. Despite loosing an engine on lap 86 and finishing 37th, Truex remains second in the standings. Jimmie Johnson captured his first stage win of the year in stage two.

Harvick is the 11th different winner on the Monster Energy NASCAR Cup Series in 2017. Because Joey Logano’s win at Richmond is considered encumbered and not recognized as a playoff qualifying win. Only 10 playoff spots are currently taken. Harvick, Keselowski, Blaney, Kurt Busch(41), and Ricky Stenhouse Jr.(17) hold five of those ten spots. Logano currently sits in 10th. With Clint Bowyer holding down the 11th spot in the standings. Trevor Bayne(6) is 18th, but 90 points out of the last qualifying position. Bayne will likely need a victory or run of strong finishes to put eight Fords among the 16 playoff contenders.

Next week it’s back to Daytona for the Coke Zero 400 Powered by Coca-Cola, race time 7:30 pm on Saturday night. The following week the Lasco Press covers live the Quaker State 400 Presented By Advance Auto Parts from Kentucky Speedway. Also at 7:30 Saturday night start.

Dale Earnhardt Jr.(88), in a pre-race interview with Michael Waltrip, left the door open to competing in more NASCAR Cup races. Earnhardt had already announced he would run some Xfinity Series races. He told Waltrip, “I haven’t really hung up my helmet for good. I just don’t want to run anymore full-time. If the right opportunity came around, you never know. Hopefully, I am on the list of guys they would call.” Might we see Dale in a single race deal for the 2018 Daytona 500? 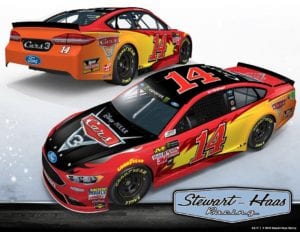 Tagging along with the success of Cars 3 from Disney’s PIXAR studios. Comedic actress Cristela Alonzo, who voices the character Cruz Ramirez in “Cars 3,” gave the command to start engines as the Grand Marshal. John Lasseter from Disney PIXAR drove the pace car to start the race. Bowyer’s car was adorned with the Cars 3 logo on the hood and a Lightning McQueen paint scheme.