The 2017 Back to the Bricks main event in Flint is scheduled for August 15-19. The Heritage Promo Tour in June is designed to create excitement leading up to the annual celebration of Flint’s automotive history. And excitement is exactly what the June 14th Tour finale brought to Lasco Ford. This year’s promotional events included stops in Clare, Big Rapids, Muskegon, Coldwater, and Adrian. Fenton hosted the last stop on the tour at the Lasco family dealership on Owen Road. 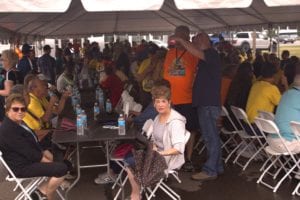 The Heritage Tour’s End of the Road Luncheon and Party drew approximately 175 cars and 600 spectators. Prize drawings and tour awards added to the festive atmosphere for the lunchtime gathering. Sponsors provided food, ice, drinks, music, tables, chairs, and a huge tent to keep the light rain at bay. A few sprinkles did not dim the festivities or the enthusiasm.

Ask anyone who attends a Back to the Bricks event and they will tell you it’s all about the cars. With a wide variety of makes and models, it was hard to choose a favorite. But, some of the iconic designer lines just grab your attention as you walk down the parade of classics. Here are some of the beauties that caught our eye.

Cheryl and Ken R. drove their 1930 Ford Model A 55B Tudor Sedan down from Davison. The jet-black paint job offset with the brilliant white sidewall tires provided a stunning appearance. Sometimes the best part of a classic car is the story behind the vehicle. Ken and Cheryl purchased the Model A five years ago from the original owner’s family. This jewel had been passed from one generation to the next since it was purchased new. The grandson who inherited it needed some money to pay off a debt and sold it. Cheryl described their barn find as rough, but too beautiful to be turned into a hot rod. An extensive restoration turned it from an aging memory into a timeless piece of art.

Terry J. from Clio is the proud owner of a 1957 Ford Fairlane 500 Victoria Two-door Hardtop. Terry bought the car in 2009 as a street racer. Holes in the floor and all. Fortunately, Terry is a welder and he performed the sheet-metal restoration himself. The car is “all-Ford” with the color chosen by Terry’s wife. The original paint scheme and interior match the 1957 production specs directly off the assembly line.

Regardless of the model year, the distinctive lines of the Vette get a car lover’s heart pumping. Gerald K. bought his 1962 Corvette from a local owner 39 years ago. After collecting original parts for 17 years Gerald set out to perform a complete stock restoration. While the car was in good shape when purchased, it contained a number of custom modifications. Gerald’s efforts at returning the car to original condition earned it the Duntov Award from National Corvette Restorers Society. Even the Honduras Maroon paint matched the original specs for the car.

John M. started to build this hot rod coupe in his garage 14 years ago. Using a 1930 Ford Model A body and a powertrain consisting of custom components. A Chevy 350 engine bored out to a 383 stroker, fitted with a 700R transmission, hooked to a 9-inch Ford rear end. The project took 10 years and produced what John calls “a good cruiser.” His special mods on the air cleaner and radiator overflow tank reflect his creative efforts.

Stunning paint on the original 1932 Chevy body is the first thing you notice on Frank B’s street rod. Built in the 1960’s Frank is the fourth owner, acquiring the ride in 1990. It has a 1980 Corvette engine, with a Camaro rear end and a Corvair front end. All “old school” is how Frank describes it. Great look, great fun to drive; yes, we’re envious.

Hazen T. bought his 1931 Ford Model A at the prompting of his son-in-law. After Hazen’s wife passed away the project help to fill the lonely times over the past 10 years. According to Hazen, “it took two trailers to get the pieces home. The previous owner had taken it apart 45 years ago and never moved the project forward. Hazen credits his woodworking skills with helping to restore its original appearance. For the past two years, he has proudly displayed his handiwork at events like Back to the Bricks.

As the cars filed into Lasco Ford the large parking lot in front of the service department quickly filled. A huge tent from sponsor Gerychs Party Rentals provided a place for drivers to gather. Spectators mingled with the classic car owners as picture taking was the activity of the day. The party really began to rock as DJ Bill Young from Young’s Entertainment played everyone’s favorite cruising songs. The classic tunes set the perfect atmosphere for the day’s schedule.

Display vehicles continued to roll in well past the 11 am starting time. Local spectators parked and walked the display lot. Guests toured the Lasco Ford showroom. Comparing the new models to their classic cousins outside.

Every registered participant in the Back to the Bricks Heritage Promo Tour received a lunch ticket. The crew from The Laundry, Crust Bakery, and El Topo Restaurant provided lunch. Chicken burritos, overstuffed turkey sandwiches, and chocolate chip cookies. Serving 400 people is a big assignment. Remarkably they accomplished the task in a little over 30 minutes.

The day ended with awards for the classic car owners supporting the tour. Lasco Ford Vice President Jay Lasco thanked the crowd for the large turnout and making the event such a success. Jay drew guest’s names for a number of prizes provided by Lasco Ford. Gift certificates, framed prints of Ford vehicles, meal vouchers to The Laundry, Crust, and El Topo. As well as free oil changes and vehicle details from the Lasco Ford service department.

The Promo tour was a great warm-up for the August main event. Plan your calendars for the annual Back to the Bricks celebration in downtown Flint August 15-19th. Visit their website www.backtothebricks.org for additional details.