The King, Richard Petty, celebrates his 80th birthday the day after the Coke Zero 400 Saturday night at Daytona. For Richard, spending his birthday at the “Birthplace of Speed” is a 60-year tradition. Daytona International Speedway hosts a Monster Energy NASCAR Cup Series race on or around July 4th every year. The event coincides with the observance of the Nation’s Birthday. This year the King’s birthday celebration will intensify NASCAR Nation’s draw to the “World Center of Racing.”

Considering the significance that Daytona represents to the King’s career. It seems the right time to reflect on the moments that helped define both Richard Petty and NASCAR. 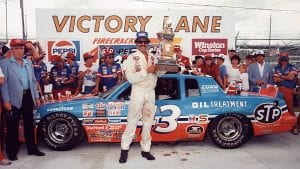 It’s hard to determine if Richard Petty established the prominence of Daytona International Speedway. Or if the Speedway solidified the legend of the King of NASCAR racing. Undoubtedly the visit of a sitting President of the United States to Daytona on Independence Day drew the attention of more than just stock car racing fans.

It’s likely not one of the 80,000 plus fans in attendance that 4th of July will ever forget the scene of Air Force One landing at the airstrip behind Daytona International Speedway. President Ronald Reagan held the honor of Firecracker 400 Grand Marshall. He issued the command “Gentlemen start your engines” by phone from Air Force One in route to the Speedway.

Upon his arrival, Reagan becomes the first sitting President to attend a NASCAR Cup Series race. The president, no stranger to a microphone, called a portion of the race with ABC announcer Ned Jarrett. In a surreal finish, Petty outduels Cale Yarborough for his 200th and final career victory. After exiting his car Petty ran to the gate in the fence by the starter stand. Climbing into the grandstand he jogged up the steps through cheering fans to do his victory interview with the President.

In an interesting aside to the race, the 1984 Firecracker 400 finished under caution. Petty and Yarborough raced to the line with the yellow flag waving. This was the rule long before the Green-White-Checkered procedure was instituted to prevent such an occurrence. Yarborough lost the race by the smallest of margins. However, he was not credited with a second place finish. On the final lap, Yarborough pulled off the track too soon. Allowing Harry Gant to take the second position. Yarborough finished third.

Richard Petty won the Daytona 500 seven times. But, in what is often referred to as the “Best Finish Ever” for a NASCAR Cup Series race, Petty just missed an eighth win. In an iconic battle with David Pearson in the Wood Brother’s Mercury. Both drivers wrecked just short of the finish line. Pearson, restarted his crumpled race car and limped across the finish line for the victory.

Fans argued whether Pearson spun out Petty. Or Richard moved to the top too soon initiating the contact. The popularity of NASCAR Cup racing began its meteoric rise. In part from the drama played out on that February afternoon.

After seven Daytona 500 victories, Richard Petty’s most breathtaking moment occurred in the 1988 Daytona 500. Coming out of turn four on lap 105, Petty’s number 43 Pontiac was bumped from behind. In one of the worst wrecks at the World Center of Racing. Petty’s car began to barrel roll side-over-side. The flipping car hit the wall and stood on its nose. Then pirouetted along the fence as parts flew in every direction. After coming to rest in the middle of the track. Brett Bodine hit the left front of the wrecked Pontiac. Spinning the car three and a half circles, ending with Petty facing oncoming traffic. Fortunately no further contact occurred.

As fans in the grandstands and a national television audience held their breath. Petty was removed from the car. In a testament to the safety features mandated by NASCAR, Petty escaped with only a broken ankle.

In the first “live” flag-to-flag coverage of the Daytona 500, CBS cashed in on one of NASCAR’s iconic moments. Dubbed “the Great American Race” by Ken Squier. The broadcast is credited with exposing America to the “Southern” sport of stock car racing. On the last lap, Donnie Allison and Cale Yarborough were battling it out for the win. Both drivers beating on each other with their cars. Heading into turn three they wrecked, sliding to the bottom of the track.

Richard Petty, Darrell Waltrip, and A.J. Foyt ran third, fourth, and fifth. The trio was well behind the race leaders. With the top two cars off the track, Petty held off Waltrip to take the checkered flag. Petty’s sixth Daytona 500 victory. As the Petty’s celebrated victory, Bobby Allison stopped to check on his brother’s damaged race car. Only to become embroiled in a brawl defending his brother.

In addition to broadcasting an incredible race with an improbable finish. CBS got some help from Mother Nature. A late winter snowstorm blanketed the East Coast. Significantly raising the viewership in key markets. The combination of events is said to have been an important factor in the national surge of interest for NASCAR that Petty and Daytona International Speedway combined to provide.

Ryan Newman Talks About Daytona Accident and Return to Racing