Ryan Blaney is a Monster Energy NASCAR Cup Series winner for the first time. His win at Pocono gave the iconic Wood Brother’s team their 99th career victory. Kyle Busch continues to be the most snake-bitten driver of 2017. After dominating the Axalta presents the Pocono 400, Busch finished ninth. He led 100 of the 160 laps around the “Tricky Triangle.” However, while leading with 20 laps to go, a caution left Busch with a difficult decision. Pit and loose the lead or stay out and try to finish on worn tires.

Busch’s regular crew chief, Adam Stevens, and two crew members were suspended for losing a tire last week at Dover. Interim crew chief Ben Beshore made the call to keep Busch on the track during Sunday’s final caution. The remainder of the field pitted and fresh tires proved to be the key. 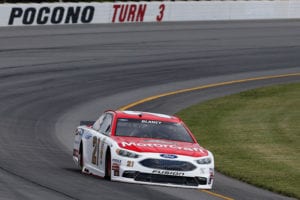 Blaney held off a late charge by Kevin Harvick as Ford took four of the top five finishing positions. Kurt Busch finished fourth and Brad Keselowski took fifth. A nice finish for Keselowski after wrecking early the last two weeks. Ricky Stenhouse Jr came in 11th to round out a strong day for the Blue Oval drivers.

Rookie Darrell Wallace Jr. finished 26th. Wallace became the first African-American to compete in NASCAR’s top series since Bill Lester in 2006. He signed this week to fill in for the injured Aric Almirola. Wallace is driving the number 43 Petty Fusion for King Richard.

In an interesting twist to the race Dale Earnhardt Jr, driving for race sponsor Axalta finished 38th. The Hendrick’s Motorsports driver was forced to the rear at the start. Earnhardt missed a shift during qualifying. He inadvertently put the transmission in second gear instead of fourth. The engine over-revved and blew up. The engine change resulting in him having to start at the back of the pack. Earnhardt made the same mistake again on lap 58 and became the second car to exit the race.

The Cup Series pays its first visit to Michigan International Speedway this Sunday. The track in the beautiful Irish Hills is NASCAR’s fastest. It is also the home track for two of the Series manufacturers, Ford and Chevrolet. Visit mispeedway.com for tickets starting at $35. The Lasco Press will be on-hand live all weekend reporting from the track in our own backyard.