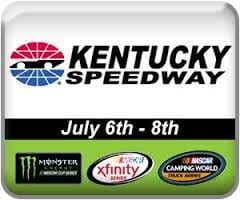 Kentucky Speedway hosted a weekend of NASCAR racing at the track in Sparta, Kentucky. All three NASCAR Series were represented. The NASCAR Camping World Truck Series for the Buckle Up In Your Truck 225. The NASCAR Xfinity Series in the Alsco 300. And the Monster Energy NASCAR Cup Series showcased in the Quaker State 400 presented by Advance Auto Parts. The Xfinity race postponed from Friday night to Saturday afternoon gave fans a doubleheader of racing action.

Storms Thursday and Friday night did not dim the fans enthusiasm. But, it did juggle the schedule both nights.

The Speedway does a great job of catering to the fan experience. Starting with the kids. NASCAR offers free admission to youngsters 12 and under for both the Trucks and Xfinity Series. Cup Series tickets for the pre-teens sold for $10.

Aric Almirola, Landon Cassill, and Brad Keselowski signed autographs for kids only. A real treat to meet these stars of NASCAR up-close, in person.

There is no shortage of things to do pre-race. The Monster Energy motocross stunt riders excited the crowd. Horsepower revved up the fans. NASCAR Trackside entertained, talked racin’ and interviewed drivers. Shuttles moved fans from parking lots to entrances. And everyone had a good time.

The Country Music Band Sawyer Brown performed pre-race on a portable stage pulled onto the front stretch next to the driver introduction podium. Fans stood in front of the platform dancing, singing, and cheering. Others sat on the track surface, signed the start-finish line.

As crews made final preparations on the cars, fans visited victory lane, walked pit road, and watched as the cars were lined up in their starting order. Governor Matt Bevin dropped in, literally, to bring the green flag and kick off Driver Introductions. Hanging from a cable under a Blackhawk Helicopter, the Governor touched down safely on the grass at the beginning of pit road. Much to the relief of the relief of his security detail. He also kicked off the race. Driving the pace car to bring the field to the green flag.

Driver Introductions, Greeting the Fans, Getting Ready to Race

There is always that fan that is the first to come and the last to leave. Kentucky Speedway has such an individual. He never misses a race.

August 2019: Inside the Garage, Are NASCAR and The Brickyard Heading...