Practice session one for the Monster Energy NASCAR Cup Series ended with Jamie McMurray(1) posting the fastest speed at 186.7 mph on the newly repaved Kentucky Speedway. The Fords of Ryan Blaney(21), Danica Patrick(10), and Clint Bowyer(14) sit fourth, seventh, and eighth respectively. All three within one mile per hour of McMurray. No big surprises as Ricky Stenhouse Jr.(17), Kevin Harvick(4), Brad Keselowski(2). Along with Joey Logano(22) and Trevor Bayne(6), placing in the top 20 fastest cars. Kurt Busch(41) is 21st at 183.7.

The first time on the track since offseason repaving and slight modifications to corner banking produced no issues. Suspension tweaks will no doubt raise speeds in the final practice session.

Matt Kenseth(20) announced that “as of today I do not have a job for next year.” The Joe Gibbs Racing driver is winless in 2017. But currently, sits in the final playoff spot. The announcement fueled speculation that Kenseth may be a candidate for the 88 car that Dale Jr. is vacating.

“From our standpoint, we are thrilled beyond words,”  Simendinger said. “We really couldn’t even dream of doing this race with anybody other than Quaker State, and we’re committed to continuing to build that Quaker State brand here through everything that we do all year round.” McCormick said the Cup race at Kentucky is the perfect race for the Quaker State brand. “Kentucky Speedway is a tough track. It’s a tough place to win. Ironically, this race has only been won by champions. Every winner of this race over the past six races has been a NASCAR Cup champion,” McCormick said. “I think that is indicative of what we’re trying to deliver here and the message about Kentucky Speedway and Quaker State brand.

Qualifying set the field for the Seventh Annual Quaker State 400 presented by Advance Auto Parts. While inclement weather washed out the final qualifying session, times posted in session one and two set the starting order. Kyle Busch(18) won the pole with a new track record of 190.282 mph.

A favorite for the pole, Series points leader, Kyle Larson did not post a speed. Larson’s car failed tech inspection and will start last in the field. Larson took the mishap in stride and expects to work his way forward through the evening. It will be fun to watch as drivers scramble early adjusting to the new racing surface in the draft.

NASCAR postponed Friday night’s Alsco 300 due to heavy rains. Rescheduling the start for Saturday at Noon. Setting up a Saturday doubleheader as the Monster Energy NASCAR Cup Series race runs that evening at 7:30 pm. 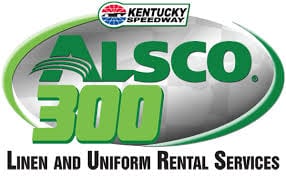 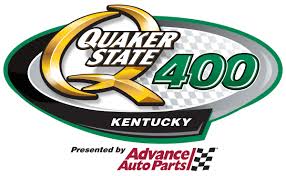