One more story to tell from the Loretta Lynn Ranch covering The 36th Annual Rocky Mountain ATV/MC AMA Amateur National Motocross Championship for the Lasco Press. Merely by chance, we met a family competing there. And, it turned out to be one of those stories you normally only find only in a Hollywood script. It was fun watching it unfold.

It’s Tuesday, the first day of competition. We are standing by the starting gates as Ryan Valade(RV) was prepping for his first moto, I was truly in awe. Never having covered a motocross event and on my first assignment to do so, covering the National Championships. Wow, it was almost overwhelming. So many things happening, so many things to see.

Running motos every 30 minutes all week requires a fair amount of scheduling precision. The track officials keep everything flowing smoothly. As one group of riders move to the starting gates, another group moves into the staging area just behind the starting line. A third group begins to form behind the staging area. During this process waiting for the start of RV’s heat, I spot a young rider perched on a bike. The bike is as tall as he is and he can’t reach the ground with his feet. Someone I assume is his mother is holding on to him providing support. Cute kid, pretty lady, so I snap a picture.

After a moto, the top ten riders are directed to a tented area as they come off the track. The winner’s podium is adjacent to the tents which serve as an area where pictures are taken, interviews are conducted, and families gather to share hugs and congratulations. On Wednesday, while walking past the tents after a race, I see the same pretty lady. Only this time she is standing by a young girl sitting on a bike. The girl is tall enough to support her bike, so mom is just offering a congratulatory hug. They are near the podium, so that means the young girl had a pretty good ride. Of course, I snap another picture.

Back at Camp Lasco, while reviewing pictures I notice the young girl’s number on her racing vest is 34. Grabbing the program with the week’s schedule, I check her moto to find out what class she is racing in. Looking up the list of participants in the Girls 11-16 division, number 34 belongs to Tayler Allred. She is also running in the women’s class age 12 and up. They have a moto coming up. So it’s back to the track, Tayler earned a top ten in that race also. After locating Mom, I introduce myself and ask if the family would be willing to consent to an interview. Certainly! Mom’s name is Sabrina (Bree), she introduces me to Dad (Ryan) and we check our schedules.

After explaining I am there covering Ryan Valade and his race schedule has no motos scheduled for Thursday. We agree that Thursday afternoon would be a good time for all parties. A quick description of their campsite, trailers, and location on the property (down by the river) follows. Dad Ryan says “Campsite 3.” Simple, right?

Starting to Form the Story

Adjacent to the track is a board where moto results are posted for viewing. Having established who Tayler is, a check of the race sheets locates the Girls 11-16 division results. Tayler has finished second in the first two motos of the class. Bad news, the same girl beat her in both races. Still, there could be a story here. “Rider Just Misses Out on National Championship.” Or “Girl vs Girl Competition Highlights Race Week.” Friday’s final will determine how the article gets written. Mark down the time of Tayler’s race on the schedule for that day. It’s for sure “don’t miss drama.”

Shortly after Noon on Thursday, I head out to find the Allred campsite. Real men don’t ask for directions. Driving down the main road through the camping area I head for the river. Looking for campsite 3 turns out to be a bit more difficult than expected. Campsites are not well marked. Dad Ryan had said, “both the trailer and motorhome are white.” Mom Bree said, “you’ll know it’s ours because it will have the kid’s names and numbers in the window.” Another setback, 75 percent of the trailers and motorhomes in the Loretta Lynn Ranch that weekend are white.

After a 30-minute search along the river, it’s obvious I am going to need help. So, I break down and ask a ranch worker where I can find campsite 3. Her reply is, “do you mean individual campsite 3 or camping area 3?” “Does the river run past camping area 3? I ask.”

“Honey, the river runs past all 3 camping areas and there are 500 campers in each area. Do you have any more information than that?”

“Their camper is white!”

That comment draws a laugh, a head shake, and an offer of “good luck. Camping area 3 is straight down this road, look for the big sign.”

In the correct location, another 15 minutes of searching produces results. Mom Bree sitting outside the motorhome spots my car and waves.

Not wanting to prove I am completely unaware of anything to do with motocross racing. Wednesday night in the hotel room it’s research time on the internet. The program listed the Allred’s hometown as Riverton, Utah. A researchers best starting point, Facebook. After a bit of web surfing, I manage to identify the whole family, Ryan, Bree, Daughter Tayler and Son Jace. From Ryan’s Facebook page I learn he owns a business, S&S Manufacturing in West Jordan, Utah. There is also a call-out on his page to a motocross racer by the name of Tyce Olsen.

A Google search on Tayler reveals this girl is an accomplished moto rider. Multiple championships, consistent top finishes and an up and coming star in the sport. Now we are getting somewhere. Then Dad Ryan’s name pops up in a quote from an interview on 13 News, the local Fox Television station in the Salt Lake area. 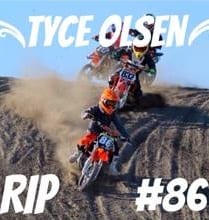 Here is where the story takes a somber turn. The connection to Tyce Olsen is made clear. While competing in a race the Allred’s also attended, Tyce had a tragic accident. His injuries were severe and Tyce ultimately lost his life. Ryan’s reaction to the untimely death is chronicled in the interview.

Now the dilemma, is this an appropriate subject for the interview. If approached, will it inject a cloud over what to this point has been a great week of racing for Tayler. Ryan’s Facebook page indicates a strong attachment to Tyce. The inference is the tragedy had a strong impact on the whole family.

Thankfully the Allred’s invite me inside their air-conditioned motor home. Yes, the heat and humidity were taking their toll. Covering an event this massive logs a lot of foot traffic. Inside Grandma introduces herself and the family gathers in the front seating area to talk.

We start with the easy questions about Ryan’s business. A CNC machine shop with 13 loyal employees to keep it running when Ryan is on the road with the family.

Yes, they travel a lot. Approximately 65,000 miles a year to motocross events, primarily out west. But, they also travel to Florida and of course this week’s trip to Tennessee.

It takes two full time parents to manage it all. Mom Bree often taking off with one of the kids while Dad Ryan goes with the other.

We talked to Jace, following in big sister’s tracks, he qualified to race at the AMA National Championships as well. Sure, he’s won a lot of races, Jace seems to just take it in stride. It’s expected, it’s what the family does.

The conversation with Tayler brings out her competitive drive. You look in this girl’s eyes and you can see the fire that motivates her. All business, be the best at what she does. The desire to win and the will to do what it takes to accomplish the task.

“Two second place finishes in your class, what’s it going to take to beat Jazzmyn in the final moto?” I ask. “Keep it on two wheels” according to Tayler. During the first two motos she crashed and still held onto second. A clean ride would give her a chance to win the final moto. Still, if Jazzmyn places high enough in the final she will win the overall title based on her two first place finishes. (No. 46 Jazzmyn Canfield, the winner of the first two motos in Tayler’s class)

The family was so easy to talk to it seemed we were old friends. So, I ask the tough question.

“Ryan I read an article where you were quoted talking about a young man that died at a moto in your home town. Are you Ok with telling us something about that?”

Fortunately, no hesitation. “Yes, Tyce Olsen, his family lived across the street from us. The kids were best friends. It was just a freak accident. He was involved in a crash and tumbled over the handle bars. Unfortunately, he did not get up.”

“Did it scare you and Bree?”

“Frightened us, yes, we wanted the kids out of it ”

“What changed your mind?”

“They talked us out of it. They wanted to keep going.”

“Tayler, do you ever worry about getting hurt?”

“Have you been injured.”

“Yes, a broken wrist, some concussions.”

“Did you hesitate to get back on the bike?”

“No” it happens. You just get back on and keep going.”

The Allreds honor Tyce with their competitive spirit. This is a family with their act together. Embracing an activity that the whole family can enjoy and participating in it together leaves no time for the trouble some teens find themselves getting into. More families would benefit from the close knit association that comes from an all-inclusive activity like riding motocross.

Tayler’s final moto in the Girls 11-16 class was scheduled just before RV’s final in his primary class the Senior 40+. Set the alarm, get to the track early. Tayler’s race was delayed slightly with the controversy we reported on in the 250 C class. Heightening the drama a notch or two.

When the race started Jazzmyn got a good hole shot, Tayler was mired in a pack of riders heading to the first turn. Would race three be a repeat of the first two heats? No way, at the end of lap one Tayler, was in second, Jazzmyn third. They held the same positions after lap two. On lap three Jazzmyn passed Tayler the pair swapping positions. Jazzmyn held the second spot through lap five with Tayler just a fraction of a second behind in third.

Close at the Finish

During that fifth lap, smoke began to appear from Jazzmyn’s exhaust. After the sixth lap, the engine was overheating and Jazzmyn dropped to 4th. Tayler surged back into second. If she could just gain the lead and Jazzmyn stayed in 4th the National Championship would be hers. At the finish line, Tayler took second to Korie Steede by the smallest of margins.

Pulling into the tent next to the podium, Tayler turned around and looked for Jazzmyn. Number 46 was nowhere in sight. Jazzmyn’s engine had expired and she was unable to finish the moto. While I may be a motocross novice, I am pretty good with math. Tayler was the Girls 11-16 National Champion. Mom Bree had just gotten confirmation and the celebration was on. Sadly the DNF dropped Jazzmyn out of the top 10, she finished 11th overall. One spot out of award recognition.

Thanks to Ryan, Bree, Tayler, and Jace for sharing their Loretta Lynn experience with me. The fact that Tayler was able to pull off a fairytale finish in her classes final moto made it all the more special.