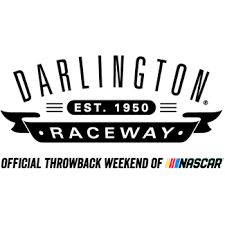 It’s become a tradition for the Bojangles’ Southern 500 to provide NASCAR fans with a glimpse back into racing immortality. The Labor Day weekend event at Darlington Raceway is highlighted by throwback paint schemes on the cars that evoke memories of the sports greatest drivers and moments. Even the Raceway has re-imaged their logo in recognition of the throwback theme. The track that’s “Too Tough to Tame” is old enough to remember the grand stars and cars of the sport.

This years edition runs Sunday night September 3rd. Here are some of the sights you can expect to see caressing the “Lady in Black” under the lights at Darlington.

Pearson is most closely associated with driving the Wood Brothers #21. That partnership ended in 1979. In 1980 Hoss Ellington coaxed Pearson out of retirement to drive the #1 Hawaiian Tropic sponsored car. Pearson scored the final NASCAR Cup Series win of his career that year in the Rebel 500 at Darlington. Jamie McMurray’s car will display the same style number and lettering with his current sponsor McDonalds. 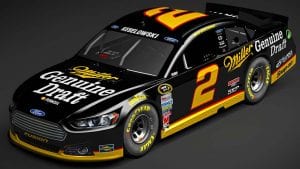 MillerCoors has been a long time sponsor on the NASCAR circuit. Keselowski’s white Miller Lite deuce carries the MillerCoors brand as their current sponsor. Brad’s car will be painted to model Rusty Wallace’s black Miller Genuine Draft who drove for Roger Penske when the scheme was introduced in 1991 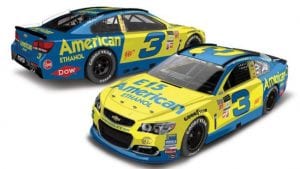 Car owner Richard Childress brought the #3 back to the track for grandson Austin Dillon to drive. This year’s throwback paint echoes Dale Earnhardt’s blue and yellow Wrangle Jeans colors before “the Intimidator” went Goodwrench Black. Current sponsor American Ethanol sits on the hood and fenders next to the number remembered fondly by Dale fans.

Busch Beer’s slogan in the early 1990’s was “Head for the Mountains.” Commercials featured a horse rearing up on its hind legs with Rocky Mountian vistas in the background. Harvick’s throwback paint scheme pays tribute to that advertising image. View the Stewart Haas Twitter post for a 360-degree look at the #4 car.

The wait is over! We proudly present the No. 4 @BuschBeer Ford Fusion that @KevinHarvick will race in the #Southern500 at @TooToughToTame. pic.twitter.com/TUNQjx4D5f 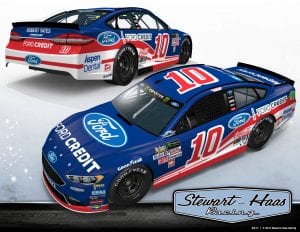 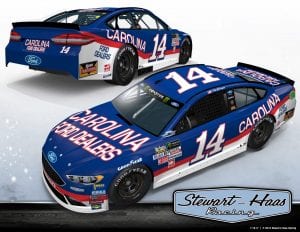 Between 1988 and 1991 Mark Martin drove in the Xfinity Series with sponsorship from the Carolina Ford Dealers. Clint Bowyer’s throwback look pays tribute to that paint scheme. Bower and Martin are friends and Stewart-Haas Racing just switched to running Ford Fusions this year. Check out the 1989 commercial with a young Mark Martin as the spokesman for the dealer marketing group.

Many younger race fans may not know two of the biggest names in NASCAR combined during the 1980’s. Kyle Petty, Richard Petty’s son, drove the famous #21 for the Wood Brothers. From 1985 to 1988 Kyle scored two wins in a Ford Thunderbird with Citgo / 7-Eleven sponsorship. Ryan Blaney’s Ford Fusion will carry the same look with Ford Motorcraft and Ford Quick Lube badges. 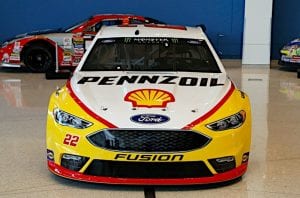 Aric Almirola will drive the King’s #43 Ford Fusion with the same paint scheme Richard Petty drove to his 200th victory. The historic win from the 1984 Firecracker 400 at Daytona International Speedway was witnessed by President Ronald Reagan. The first sitting President to attend a NASCAR race.

Dale Earnhardt Jr makes his final Monster Energy NASCAR Cup Series start at Darlington Raceway driving a car painted like the one that launched his career. During 1988 & 1989 Dale Jr drove a blue #3 AC Delco NASCAR Xfinity Series Car. Winning the series championship during both campaigns. As Earnhardt Jr. attempts to win his way into the playoffs and compete for his first Cup Series Championship, he will do so in a paint scheme replica of the only NASCAR Championship winning car he drove during his career.

Watch the Bojangles’ Southern 500 on NBCSN Sunday night beginning at 6 pm. See these featured throwbacks compete in this new NASCAR tradition at Darlington Raceway that has become a season highlight for longtime fans of the sport.

Think Wow, Your Home the Center of Attention