Dale Jr., NASCAR’s most popular driver is retiring from competition in the Monster Energy NASCAR Cup Series after this season. Earnhardt’s “JR Nation Appreci88ion” tour is at Michigan International Speedway this weekend for the Pure Michigan 400. Complete with honors bestowed, interviews, press conferences, fan fests and a full line of custom merchandise. 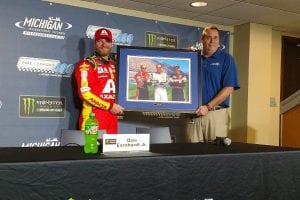 Junior visited the MIS media center on Friday afternoon to talk about this weeks race, the fans, his pending retirement, and his controversy with Kevin Harvick. Junior reminisced about racing with his dad, Dale Sr., at MIS in an International Race of Champions event at the track early in his career. At the conclusion of the press conference, MIS Track President Rick Brenner presented Dale with a framed picture of his dad, brother, and himself. The picture, taken at the Speedway in 2000, holds special significance to the family. The event was the only time the trio raced together.

Hear the entire interview at the link below.