Herman Ferguson does not consider himself a hero. He thinks of himself as a normal guy. Someone who wanted to do something for real heroes that don’t always receive the recognition they deserve. These heroes put their lives on the line every day at work for the benefit of others. 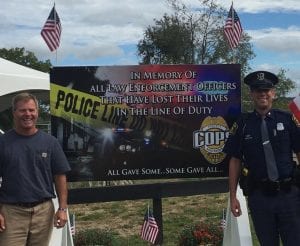 Concern Over Police Safety (C.O.P.S.) is a non-profit charity started by Ferguson. The purpose of the organization is to support our police officers and raise the focus on their safety. C.O.P.S. held their second annual Police Appreciation Picnic yesterday at Windwalker Farms in Fenton. Officers from 27 Jurisdictions in three States signed up to participate.

Ask Herman how this all got started and this is the story. “I attended the funeral of a local police officer. An out of state officer walked by and I thanked him for his service. The officer stopped and responded that it was the first time he had ever been thanked by a civilian.” Taken back by sadness in the officer’s voice Herman decided he was going to do something to make sure that never occurred. 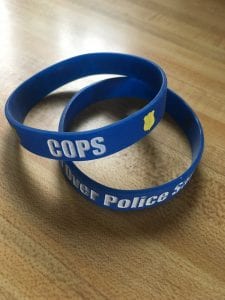 Starting with money from his own pocket, Ferguson had some blue wristbands made and started distributing them to police departments all over the country. A police officer told him about a website called Officer Down Memorial Page. Ferguson began following the page. Every time an officer lost their life Ferguson would send 100 wristbands to the department.

Now 40,000 wristbands later the movement is still going strong. Across the United States and eight countries including Canada and Mexico. Policemen and citizens alike wear them to promote unity and show appreciation for those who serve. You can support the effort by visiting the C.O.P.S. website to order wristbands and t-shirts with proceeds going to the charity. Ferguson is happy to sell large quantities to organizations or groups wishing to add their support to the mission. An order of 100 wristbands costs just 50 cents apiece. A very economical way to spread the message.

Community Support for the Picnic

The picnic was a grand success. Local sponsors donated cash and other items to fund the event. Leo’s Coney Island, Little Cesar’s Pizza, and Johnny’s Pizzeria donated food.  Lasco Ford was on hand as a contributing sponsor and to share with the officers present Ford Motor Company’s commitment to helping meet their transportation needs. Ford offers a substantial discount on new vehicle purchases through their 1st Responder Discount program. Peaceful Authority an acapella vocal group consisting of officers from Flint, MI performed to the delight of the crowd.

Local hero Lieutenant Jeff Neville, the Bishop Airport police officer injured in the terrorist attack at the Flint Airport earlier this year visited the picnic to thank everyone present for their support. The Fenton Fire Department brought a 20 X 15-foot flag that was displayed from a crane donated by Alta Equipment Company of Burton, MI. During the National Anthem, a helicopter from the Michigan State Police flew overhead.

Herman, through his business Ferguson Lawn and Tree Service, has invested in excess of $20,000 to initiate, fund and support the charity. If you need landscaping, snow removal for the coming winter, a tree or stump removed call Herman at the number listed on his Facebook page. If you would like to provide sponsorship for next year’s Police Appreciation Event contact Herman via his email (herm.ferguson72@yahoo.com) for additional details.

In the hearts of those officers whom Herman Ferguson has touched with his efforts, they think he is a hero.

Ally Challenge presented by McLaren introduces The Concert at 17

September 11th, Time to Remember, Time to Give Support