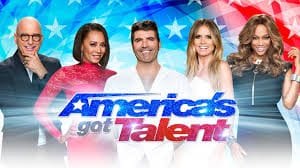 Johnny Manuel made it to the semi finals of America’s Got Talent. Unfortunately, the Flint, Michigan native failed to move on to the series finale. Gone is Johnny’s chance at winning the $1,000,000 prize awarded to the act America chooses as the season’s best.

Ultimately, his run of crowd pleasing vocals likely derailed by his song choice for the semi finals show. Johnny chose to perform an original song he wrote. Rarely does such a number resonate with viewers who cannot identify with the music and lyrics in the same manner as a cover of a well-known hit record.

He delivered the words and melody in his unique divaesque manner. The Judges and audience reactions were positive. But, not the wild enthusiasm displayed on his previous visits to the AGT stage. Judge Johnny’s act for yourself.

The quest for viewer votes gets more intense as the show progresses to its finale. The winner is announced during the season ending episode of the show. Johnny would have faced some serious competition from advancing acts had he been able to sway enough of the television audience to keep him in the contest.

Had Johnny hit his number out of the park it’s doubtful that he or anyone else will grab the winner’s prize from Ventriloquist Darci Lynne Farmer. Consider it a huge upset if anyone but 12-year-old Darci Lynne takes home the Million. Not only is she an accomplished ventriloquist, she gives a beautiful singing voice to her puppets.

In her semi final performance, Darci Lynne introduced a new character. The elderly Edna, who happens to have a crush on Judge Simon Cowell. Edna and Darci’s performance was flawless, funny, and undoubtedly won the hearts of AGT viewers. Simon blushed at the affection serenaded upon him by the duo and raved about the performance afterward.

One of the favorites from last year’s show is the act know as “The Clairvoyants.” They took a break from their current tour, produced after their amazing run in 2016, to return to the AGT stage for the semi final results show. Their performance blew away the Judges and thrilled the audience.

After one more semi final show the remaining contestants will perform in the finals. Hoping to win America’s vote and the prize that accompanies the 2017 recognition as America’s Got Talent favorite act.

New Stores Opening on the Site of the Old K-Mart in...