Following up on a story brought to you by the Lasco Press in June of this year. The Greater Flint Pilots Association (GFPA) established a non-profit 501(c)(3) charity named Michigan Takes Flight. The Association’s Board of Directors created Michigan Takes Flight (MTF) for the express purpose of promoting the expansion of, interest in, and understanding of private flying and aviation in the greater Flint area. With a goal of offering two annual scholarships to flight training students. Carol Jones endowed the first scholarship in memory of her late husband David S. Jones.

The recipient of the initial scholarship is a young man by the name of Jack Matthew Leonard. In a ceremony held courtesy of AVFlight at the Bishop International Airport in Flint, Jack received a framed certificate commemorating the initial awarding of the scholarship named after Byron, MI native David S. Jones.

Harry Hammond, MTF Scholarship Director and Scholarship Sponsor Carol Jones presented Jack the certificate. Jack’s family and a number of GFPA members were in attendance for the event. Since beginning his flight training in July, Jack has flown 15 hours with instructor Jim Sweet. GFPA President Eric Johnson also presented Jack a certificate in recognition of his first solo flight on August 29th.

The Michigan Takes Flight Board of Directors choose an outstanding candidate to receive the David Jones Memorial Scholarship. It only takes a few minutes of speaking with Jack Leonard to learn this is a young man with a good head on his shoulders. While most 17-year-olds have trouble deciding what to have for lunch, Jack has a firm grasp on what his future holds. Jack is going to be a commercial airline pilot. No doubt that dream is going to come true. 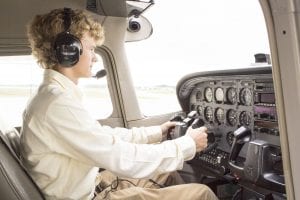 Jack remembers as a young boy being invited into the cockpit of a commercial airliner and sitting in the pilot’s seat. The Captain of that aircraft inspired in the young boy a fascination with flying. Family friend and current instructor Jim Sweet, a Delta Airbus Captain, fed that allure for the skies taking Jack flying in his early teens. Jack was smitten with the bug from that point forward.

The Cost of Flight Training

Learning to fly, even with a scholarship to help offset some of the expense, costs thousands of dollars. To make his dream come true Jack works multiple jobs to earn money for flight lessons. From roofing to delivering hay, mowing lawns and working as a janitor at Cranberries Cafe in Goodrich, MI. Jack, with his parents, sat down and looked at the expenditures that would be involved in earning a pilot’s license. They studied college curriculums and charted a path that would allow Jack to fulfill his ambition. 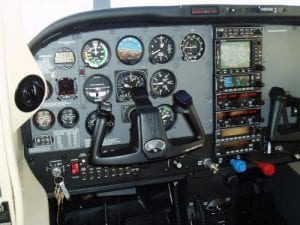 The Greater Flint Pilots Association is funded by the pilots who are members of the organization. Aircraft ownership, fuel costs, insurance, hangar space, aircraft maintenance, all add to the expense of general aviation flying. By sharing these fees among a group of enthusiasts the club makes the cost of flying affordable. With some of the best aircraft rental rates in Michigan, GFPA members enjoy more flying time than similar clubs and alliances.

Still, for a student entering his senior year at Goodrich High School, the outlay of funds would amount to a considerable portion of the earnings Jack had saved for his flight education. How much could be budgeted for basic flight training? Jack intends to enroll in the aviation program at Northwestern Michigan College after high school. Tuition and college expenses are just a year away. Just joining the GFPA would require a significant sum of money. Then an angel stepped in.

Stock car racing fans know Monster Energy NASCAR Cup Series driver Erik Jones. The Rookie of the Year candidate drives the #77 car for Furniture Row Racing. Erik came within just a few laps of winning the Bass Pro Shops NRA Night Race at Bristol Motor Speedway in August. He currently leads the 2017 Sunoco Rookie of the Year standings just ahead of Daniel Suarez. Suarez, the NASCAR Xfinity Series Champion in 2016 replaced Carl Edwards in the #19 Monster Energy Cup Car after Edwards abrupt retirement at the end of the 2016 season. Erik earned the Xfinity Series Rookie of the Year award in 2016. After capturing the same award and the Series Championship in the NASCAR Camping World Truck Series in 2015.

Many of Erik’s fans know the story of his family. Dad David and Mom Carol owned Paragon Corvette Reproductions in Swartz Creek. Their successful business helped Erik fulfill his dream of becoming a stock car racer. Erik’s skill on the track brought him numerous wins in some of the biggest races at short tracks across the country. Kyle Busch and Joe Gibbs Racing recognized Erik’s talent. Erik signed with the team at a young age. Currently on loan to Furniture Row Racing and driving the team car to Cup Series regular season champion Martin Truex Jr. Erik will return to JGR next season in the #20 car.

David and Carol closely followed their son’s racing career. David felt if he learned to fly it would be easier for them to attend races while still running their business just outside of Flint. Making Bishop International Airport a convenient place to fly from.

David and Carol joined the GFPA. Carol said, “I didn’t want to be in that plane with him unless I knew something about piloting the aircraft. So, we agreed to take lessons together.” Unfortunately, David contracted cancer and passed away at the age of 53, just as Erik’s career was gaining traction on NASCAR’s premier circuits.

As David was the primary motivator in the couple’s flight training, Carol did not see a reason to continue lessons and was going to resign from the GFPA. When the Scholarship program was announced it was suggested Carol’s membership could be converted to provide temporary memberships to scholarship recipients. After discussing the idea with Erik and daughter Lindsey the family agreed. The scholarship would be a great tribute to the man they loved and the love David had for flying.

When Carol was asked what she thought David’s reaction to the scholarship would have been. She replied, “I think he would be honored to know that someone was getting the opportunity to do what they have a passion for, just as he did.”

The Feel Good Moment of the Event

With Jack’s mother, stepfather, and grandparents in attendance, the ceremony was celebrated like a family event. Carol returning to see friends in the GFPA added to the festive mood and she eagerly greeted Jack and his family. The first meeting between Carol and Jack.

Individual and group photos were followed by a group interview session. Everyone present listened in to the inquiries put first to Carol and then Jack.  Questions about Carol’s late husband and celebrity son revealed the heart-warming story about the scholarship endowed in David Jones name. Jack and his family, for the first time, learned about Carol’s connection to the MTF Scholarship that enabled Jack to join the GFPA.

Emotions, high from the start, soon overflowed as the significance of the circumstances that brought everyone in the room together settled in. Jack’s mom Andrea commented, “It’s a good thing I brought Kleenex.” Hugs, thanks, and sincere expressions of appreciation were shared as Carol congratulated Jack and told Harry, “You could not have picked a better young man to represent the Greater Flint Pilots Association and Michigan Takes Flight.