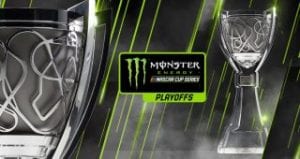 Finally, it’s time. The Monster Energy NASCAR Cup Series Playoffs start this Sunday at Chicagoland Speedway. The 16 driver’s who qualified will begin to battle it out to see who is ultimately crowned the new NASCAR Cup Champion at Homestead-Miami Speedway in November.

Here are the participants and the round by round breakdown. (Courtesy of printableteamschedules.com)

What You Need to Know

Four rounds, four drivers eliminated after each round. One race for the Championship at Homestead-Miami Speedway November 19th. The highest finishing driver of the final four is crowned the 2017 Monster Energy NASCAR Cup Series Champion.

All drivers start the Championship run with 2,000 points. The Playoff points earned during the regular season are added on to that total. The Playoff Standings as of the start.

Playoff Points are still earned during playoff races. One point for each stage win, and five points for each race win. These points are added to regular season playoff points earned and carry through to each round. All driver’s advancing earn additional points at the beginning of each round.

During the regular season, the most points a driver could win a race was 60. Two stage wins at 10 points each and a race win for 40 points. During the playoffs, those additional 7 playoff points (one each for a stage win and 5 for a race win) increase the potential to 67 points.

How important are those playoff points? Martin Truex Jr. is almost assured of advancing to the final round in Homestead. For him to be eliminated, three different playoff contenders would have to win the three races in an individual round. Or, Truex would have to suffer a complete reversal of fortune and finish 36th or worse in each race of an individual round. Then he still might advance depending on what other playoff drivers did. It will be exciting watching the point totals fluctuate through the course of each race.

Send us your predictions, we will keep score.