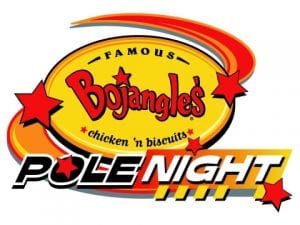 Bojangles Pole Night qualifying at Charlotte Motor Speedway began at 7:20 pm. Most teams waited until the second half of the 20-minute session before taking to the track. Letting the racing surface cool off from the day’s heat as much as possible. Tech inspection delays kept a dozen cars in the garage as the track went green.

Three teams failed to pass inspection and did not post a time. Including Byron Michigan native Erik Jones(77). He starts in the 38th position Sunday afternoon. Corey Lajoie(23) and Brett Moffitt(83) start on the last row behind Jones. As the pair also failed to make a qualifying run. 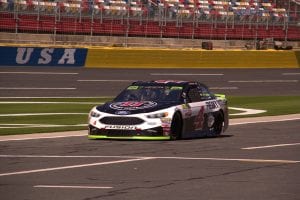 Kevin Harvick(4) ran the fastest lap of round one at 192.589 mph. Clint Bowyer(14), Ryan Newman(31), Daniel Suarez(19), and Ryan Blaney(21) rounded out the top five. The only Playoff Contender to be eliminated in the first round? Jimmie Johnson(48), the seven-time National Champion placed 25th. Only the top 24 advance to round two.

After a 10 minute break, round two started with a 10-minute time limit. Harvick again led as time expired. He was followed by Bowyer, Denny Hamlin(11), Matt Kenseth(20) and Kurt Busch(41).

With only five minutes in the final qualifying session for the Pole, drivers got one shot to post the fastest time. Hamlin won the pole with a speed 191.598 mph. Matt Kenseth starts on the front row net to Hamlin. Kenseth edged past Harvick with a speed of 191.489 mph to 191.394 mph for the 4 car. Kyle Busch, Bowyer, and Brad Keselowski(2) go off fourth through sixth respectively. Chase Elliott starts seventh, Kurt Busch eighth, and Kasey Kahne(5) ninth. Kyle Larson(42), Newman, and Patrick placed 10th through 12th.

With the field set for Sunday’s Bank of America 500 fans settled back to watch the final racing activity of the night. The NASCAR Whelen Modified Tour Southern Slam 150 ran on the quarter mile in the tri-oval. Much to the fans delight, these powerful machines put on quite a show. Just like being at your local short track on a Friday night. The racing action brought the fans to their feet as the Mods jockeyed for position directly in front of the grandstands. Doug Coby(2) earned the victory passing runner-up Danny Bohn(65) in a turn four scramble with lapped cars blocking Bohn’s progress.

In an event unique to Charlotte Motor Speedway a charity race was held to kick off Bojangles Pole Night. The Better Half Dash features wives and girlfriends of NASCAR drivers, crews, and team members. Motor Racing Network sponsors the event that donates proceeds to Motor Racing Outreach and individual charities the ladies choose to race for. This years event featured 11 drivers and contributed $40,000 to MRO.

Paige Keselowski, wife of Brad Keselowski led for most of the 25 lap event before a flat left rear tire forced her to pit with under 10 laps to go.

The Bank of America ROVAL 400, WOW