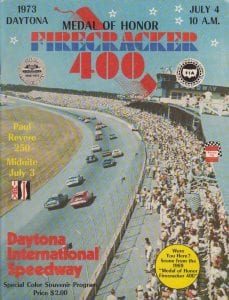 The 1973 Firecracker 400 was the first NASCAR race I ever attended. Back then the race was run at 10 am on the morning of the 4th of July. At 4 am that day I picked up my fiance and we drove the two and a half hours from the Tampa Bay area to Daytona. We beat the traffic and found a parking spot right behind the grandstands on the front straightaway. As soon as the windows on the old wooden sheds that served as ticket booths opened, I stepped up and bought a pair of tickets.  We sat in the Joe Weatherly grandstand, about 25 rows up.

It was a good seat with a full view of the entire 2.5-mile speedway. Almost similar to the picture on the front of the program sold at the track that day. We could watch the cars come off turn 4 and charge through the tri-oval. The entire pit road was visible and the start-finish line was just off to our right. David Pearson outduelled Richard Petty for the win, the only two cars on the lead lap at the end of the 400 miles. Right then I was hooked. All the stars were there. Cale Yarborough, the Allisons, Buddy Baker, Gordon Johncock, even A.J. Foyt. Marty Robbins had one of the six top 10 finishes he posted during his career that day, he placed 8th.

In the years that followed, that girl became my wife and we traveled the Southeast attending races when we could afford to make the trip. When the kids came, my Dad attending in her stead. I had the opportunity to cover the series for a while, writing for a local trade publication. Then we moved to Michigan and had to settle for televised coverage. When the opportunity arose to again write about the Cup Series for The Lasco Press, I jumped at the opportunity.

That is a long introduction to the subject of this feature article, The NASCAR Hall of Fame. Live coverage at Charlotte Motor Speedway was on the schedule for this year and I marked the date on the calendar. No way was I going to miss stopping in downtown Charlotte to visit the Hall. Yes, I could have contacted them in advance and requested a Press Pass to view the exhibits. But, I wanted to attend as a fan. So I stepped up to the Hall of Fame ticket counter and gladly paid the admission. It was worth every dollar. Besides, I wanted to write about the visit from a fan’s perspective instead of a reporters view. Certain that it would produce an article more fun to read. You be the judge.

Spend the extra $5 and get a the package with unlimited simulator rides. Trust me, one time is not enough. If you are planning on spending the day touring the exhibits, the food package is a good deal. the Bar-B-Q sandwich is quite tasty.

The audio tour is also a nice feature. Focus the provided laser beam on audio highlight features to hear a narrative of the story behind the object.

As you enter the Hall of Fame the High Octane Theater is located directly across from the entrance turnstiles. The theater features an introductory film tracing the history of NASCAR displayed on a 64-foot wide projection screen with surround sound.

Exiting the theater turn right and you enter the Great Hall. The floor of the hall holds exhibits that are rotated periodically. During my visit, the recent Cars movie highlighted the center display area. A life-sized Lightning McQueen sits near cases filled with items associated with the movie. Plaques on the floor list the mileage and direction to some of the tracks on the Cup circuit.

The predominant feature of the Great Hall is Glory Road. A circular inclined walkway follows a racetrack surface that spirals around to the second floor of the hall. The banking of the track increases as you walk up past notable racecars from the earliest years of the sport to today. The exhibition showcases memories through the decades of every era of the sport.

The Hall of Honor 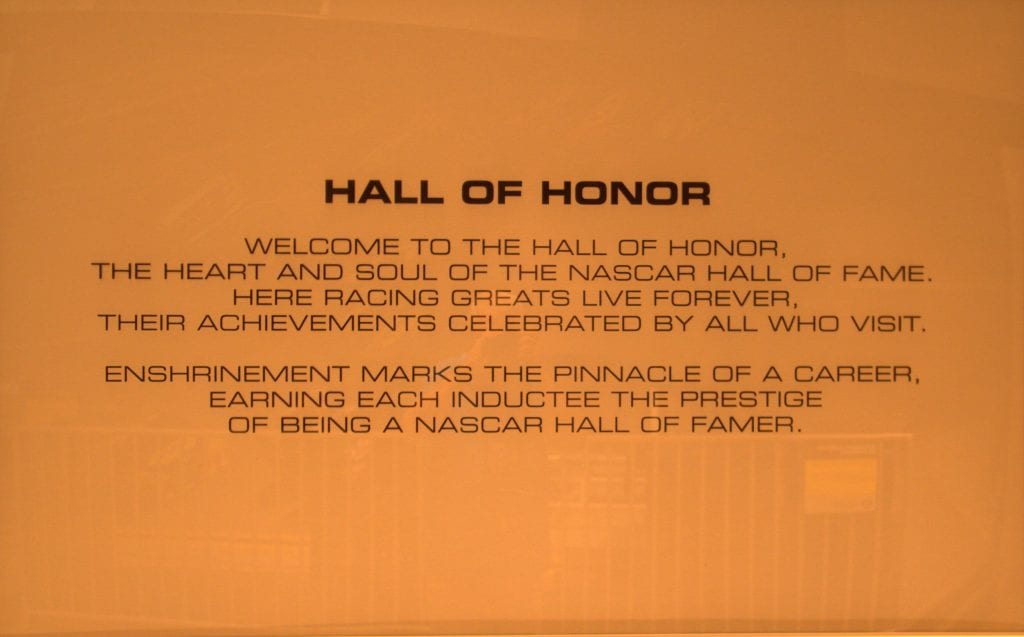 The Hall of Honor is the inner sanctum of the building. The place where the greats of the sport are immortalized forever. The darkened lighting with the spotlights behind the images on the plaques gives the hall an aura of reverence.

Gearheads can wander through displays of performance equipment, cut-away cars, and technical demonstrations. The hall even has an operational dynamometer that you can control. A life-size hauler reveals the traveling workshop teams depend on at the track.

Want to try your hand at changing a tire, jacking up the race car, or adding fuel from the big red cans. The hands on protion of exhibits is always a popular stop regardless of your age.

An Acknowledgement of History

Throughout the hall, the history of Stock Car Racing is chronicled with many one-of-a-kind exhibitions. Unique artifacts tell the story of the sport from its moonshine origins to racing on superspeedways. The organization of NASCAR is explored as well as early moments of significant importance to the men who built the sport.

After taking a turn in the simulator, you understand the advantage of purchasing unlimited rides. It takes several attempts to get a feel for the action of the controls. Expect to wreck several times until you become comfortable with the steering wheel and shifter mechanism. No worries, get a new video car and re-enter the race. Finally getting the feel allows you to compete. A win and the 36th fastest lap time of the day sent me home with a smile and the satisfaction of conquering the track and other competitors.

If you love NASCAR, a visit to the Hall of Fame is a must. Put it on the “bucket list” and circle it as a high priority. Exhibits change with regularity so there is always something new to see. Plan to spend the day, open to close was barely enough time for me. Parking is available on site and Charlotte is a beautiful city to visit. Even better if you schedule your visit in combination with a NASCAR race anywhere within driving distance of the mecca of stock car racing.