Regular readers of The Lasco Press know that we look to tell stories that you won’t find on those regular news outlets. Stories that appeal to our readers and offer a unique or fun perspective on a subject. Media Day for NASCAR’s Championship Weekend produced the regular cycle of interviews and hype for the races at Homestead-Miami Speedway. Media day also produced one of those quirky moments we look to capture. 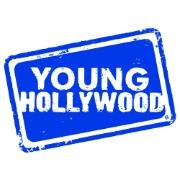 Media outlets such as Fox, NBC, NASCAR.com each had interview locations set up to talk with the Championship Four drivers. But, one stop in the Ballroom of the Loews Hotel on Miami Beach featured Young Hollywood. Never heard of them. A visit to their website younghollywood.com revealed, on the About Us page, they are “The leading producer & distributor of digital content for Millennial and Gen Z audiences.” Ah, no wonder I was clueless. I didn’t realize we have moved on from Gen X. Having trouble keeping up with those youngsters.

Host and Producer Lesley Robins, a very attractive young lady, and her cameraman (not as cute) manned the set. Two NASCAR logo director chairs and an easel with whiteboards awaited the arrival of the four Monster Energy NASCAR Cup Series Championship Contenders. As the location was adjacent to my seat at the media table it was easy for me to keep an eye on the happenings.

The SEO description of the Young Hollywood site touts them as “The source for exclusive celebrity videos. Find out information on your favorite TV, Movie, Music, Fashion and Sports stars and information.” My interest was how the four drivers would respond to Lesley’s questions and the opportunity to capture a picture of each during the interview.

What occurred was so much more. Lesley asked each driver to draw a picture of their race car and she provided colored markers to accomplish the task. First off, none of the four turned out to be a great artist. However, all were good sports. 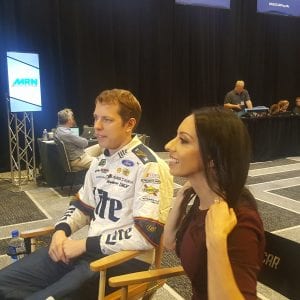 Ford driver, Brad Keselowski was the first interviewee and illustrator. Brad’s drawing did not look much like a Ford Fusion, but was a sincere effort. It was interesting how each driver’s personality came out during the process. Brad was very technical making sure to get the sponsor decal colors on the side of the car. His banter with Lesley came across relaxed and self-assured. His final sketch, not bad, the early contender for the win. Each driver was asked to autograph their work. 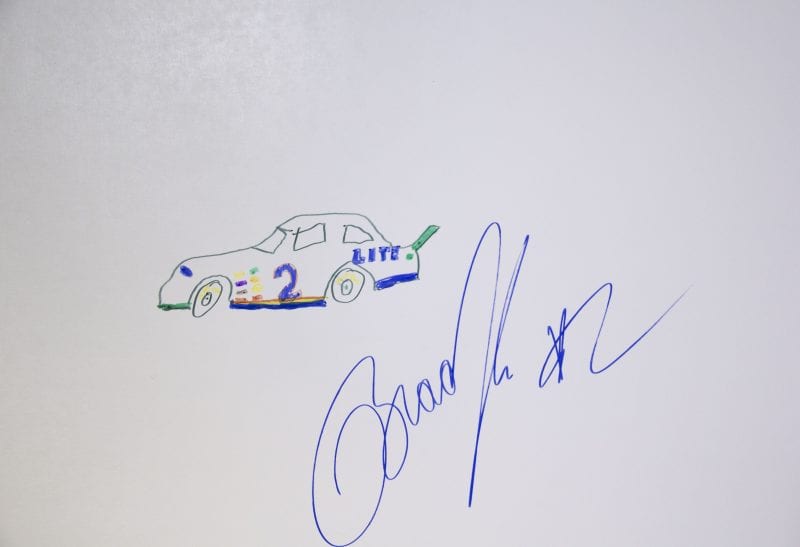 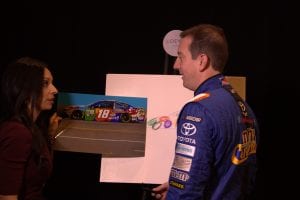 Up next, Kyle Busch. He drew the car’s outline and immediately went to adding colored M&M’s to the body. It’s that sponsor promotion that these guys all practice. No problem, sponsors are the financial engine of the sport. Lesley showed each driver a photo of their car so they could compare. While Kyle got the candy colors right, he missed on the overall paint scheme of multi-colored panels. Kyle claimed Keselowski cheated because he drives a white car. Kyle did highlight his candy machine with some speed effects. Rolling wheels and trailing air did make the car look fast. 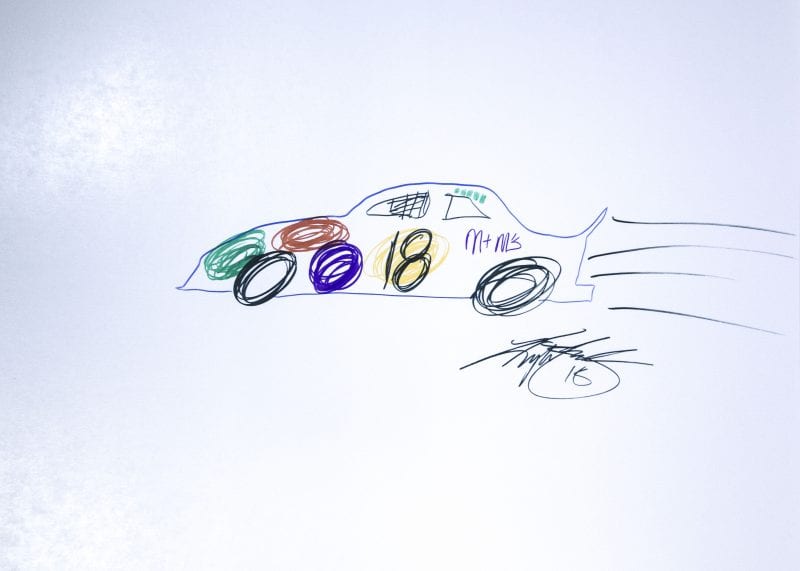 On the track, Kevin Harvick is all business. Focused, intense, somewhat like his Jimmy John’s paint scheme, mostly black and white. Try as she might Lesley could not break through that persona. Check out the lug nuts, five on each wheel, no penalty there. Does it look like a Ford? Maybe a ’39 Coupe. It doesn’t look like the photograph Lesley displayed. At least he got the sponsor initials on the quarter panel. 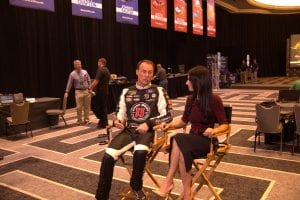 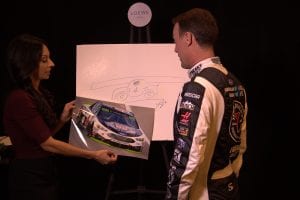 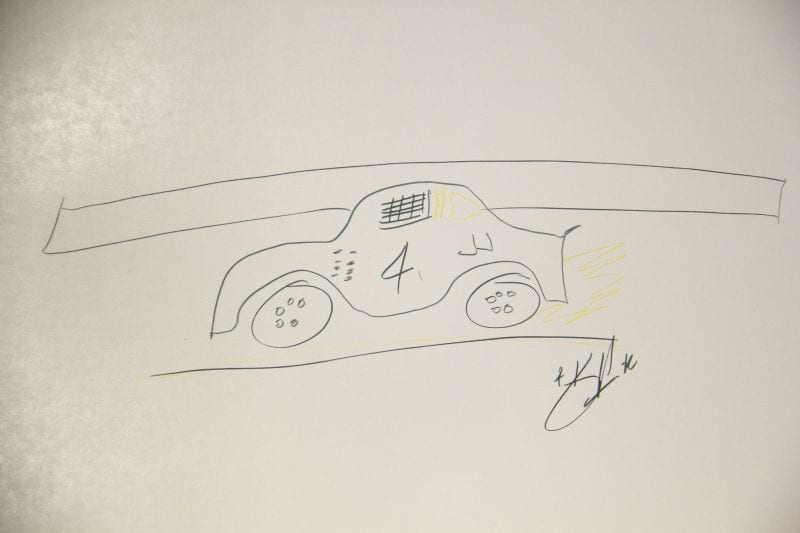 Last, but certainly not least. Martin Truex Jr. marched in with all the confidence of the season-long points leader. Another interview, no problem, let’s do it. Draw a picture of my car, you bet. Martin promptly put up a likeness in about a minute, impressing Lesley with his speed and accuracy. When Martin found out his image was being considered for best of show, he wanted to see the other contestants entries.

As Lesley pulled out the prior reproductions Martin offered his critique. Keselowski, who drew this a child, that doesn’t even look like a race car. Busch, well he got the M&M’s right. Harvick had Martin worried. “He probably draws a lot with his son.” After the reveal, no competition there. As Lesley showcased each previous drawing Martin would grab it and toss it over his shoulder. Convinced he had the superior car. How will that translate to the track on Sunday? We’ll see. 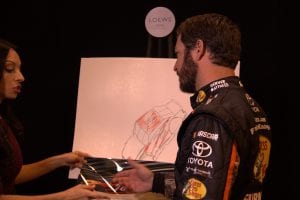 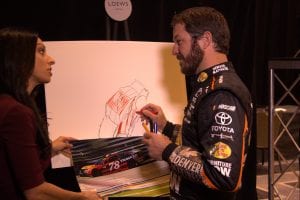 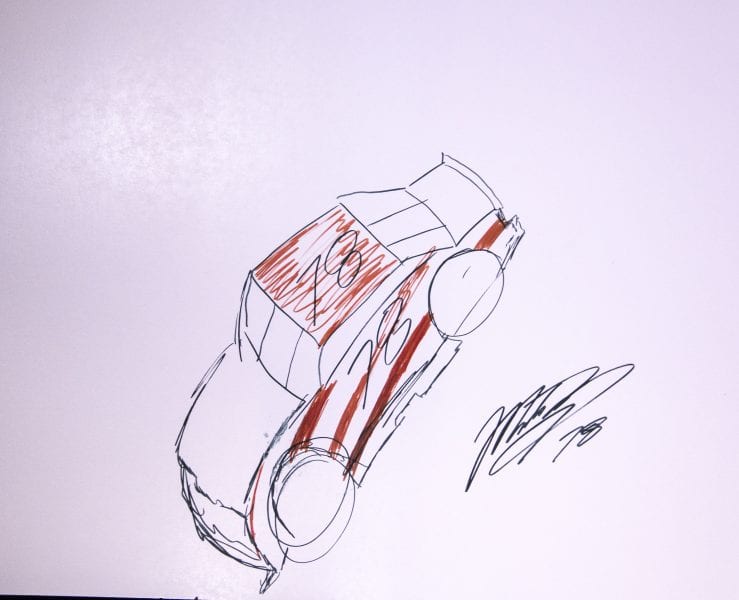 Thanks to Lesley and Young Hollywood for letting us share their moment with the Championship Contending Drivers. We promised not to post video, even though our Gen Z viewership is a little less than Young Hollywood. So, you have to go to their site to see Lesley’s production.

Look for more interesting stories as the Championship Weekend progresses. Follow The Lasco Press and Follow Steve at the links below.