It’s a pretty big deal when you get to design, in part, the paint scheme for a NASCAR Stock Car. That is exactly what happened when local Ford dealer Lasco Ford combined their management team’s ideas for a t-shirt design. Then entered it into a contest sponsored by Ford Motor Company. The T1D, Motorcraft & Me T-Shirt contest helps raise money for the Juvenile Diabetes Research Foundation (JDRF). 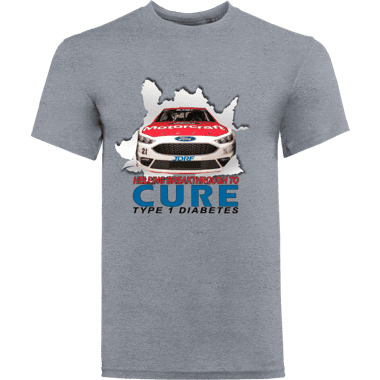 Vice-President Jay Lasco took the combined ideas and fashioned a design that featured Ryan Blaney’s #21 Wood Brother’s Ford Fusion. The nose of the car bursts through the chest of the shirt. The text “Helping Breakthrough to Cure Type 1 Diabetes” appears underneath the front spoiler of the race car.

According to Jay, “It was a team effort coming up with the concept, I just brought the elements of the design together in a computer-generated model that we submitted to Ford.” Winning the contest also meant an all-expense paid trip to the Monster Energy NASCAR Cup Series final race at Miami-Homestead Speedway. The Ford EcoBoost 400 will determine this year’s NASCAR Cup Series Champion. Service Director Patty Chemberlin will make the trip to the race representing Team Lasco. 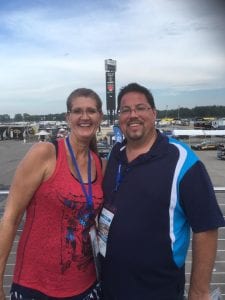 Patty led the effort to promote the JDRF Fundraiser at Lasco Ford. Sales of the t-shirt raised over $1,300 for the charity. The largest amount from among the various Ford Dealers competing for the prize. Speaking of efforts put forth on behalf of TD1 research Patty said. “Diabetes is a health issue that is close to my heart. My father passed away from diabetes-related complications. I personally have been affected by the disease and wanted to do something to support efforts toward finding a cure.”

Patty went on to say, “My father got me started going to races, he introduced me to the sport. My husband Glen and I are huge NASCAR fans. We attend each year at MIS and have been to a number of race tracks on the circuit. Going to the final at Miami-Homestead is a huge thrill. We are so looking forward to the opportunity.”

With one week left in the NASCAR Cup Series season, Ryan Blaney still has an opportunity to make the Final Four at Miami-Homestead. Patty and Team Lasco will be cheering for Blaney to put the Wood Brother’s Ford into position to win the championship.

The Lasco Press will be at Miami-Homestead Speedway live to cover all the action of the championship weekend. We will be sure to find Patty and document her adventures attending the race. In addition, we will feature a photo array of the Ryan Blaney Motorcraft/Quick Lane Ford Fusion with the Team Lasco paint scheme.

Type 1 diabetes (T1D) is an autoimmune disease in which a person’s pancreas stops producing insulin, a hormone that enables people to get energy from food. It occurs when the body’s immune system attacks and destroys the insulin-producing cells in the pancreas, called beta cells. While its causes are not yet entirely understood, scientists believe that both genetic factors and environmental triggers are involved. Its onset has nothing to do with diet or lifestyle. There is nothing you can do to prevent T1D, and—at present—nothing you can do to get rid of it. For more information visit their website at http://www.jdrf.org/.

Go Behind The Scenes With Ken Block & The 914HP Hoonitruck!