“Shuffle and deal ’em” came the command. Each of the three players picked up their cards and assessed the rank of their 5-card stud hand. The stakes of this game? Which man would lend his name to the city along the Shiawassee River, they held a share in building.

Benjamin Rockwell laid down his hand first, a pair of 10’s. Robert LeRoy followed, showing three-of-a-kind, queens. LeRoy smiled at William Fenton who had set his cards face down on the table. LeRoy asked if Fenton was folding his hand to the three ladies. Fenton shrugged and began turning his cards over one-by-one. First, a king, followed by another king. Then an ace, that followed by another ace. Fenton stopped.

“Ha, gotcha” LeRoy shouted. Three of a kind beats two pair. Now it was Fenton’s turn to smile as he reached down and flipped the final card. Another King, full house! Fenton’s chuckle grew into a full roaring laugh as he raised his hands in triumph. 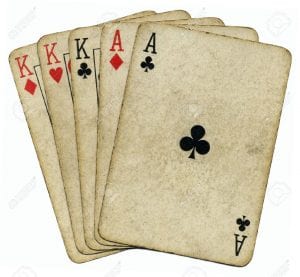 Unfortunately, there is no such detail to the legend that a game of poker determined Dibbleville be renamed Fenton instead of LeRoy. Some even dispute the legitimacy of the poker game story. But, what a fun bit of folklore to share with generations long after the town adopted its current moniker.

The Legend is visualized in the sculpture “The Game” by Artist Oleg Kedria sitting on the grounds of the Fenton Community and Cultural Center. The artwork was commissioned by Jocelyn & Phil Hagerman. It was gifted to the City by the Hagermans, to honor Fenton’s history.

The area along the river where a number of Indian trails converged originally was dubbed Dibbleville after Clark Dibble. In 1834 Dibble convinced a number of settlers to establish an outpost in the area where they constructed homes and a sawmill. In 1837 Robert LeRoy and William Fenton bought the sawmill and the surrounding land and began to develop a permanent community. Benjamin Rockwell joined the pair a short time latter purchasing the third interest in the development.

LeRoy constructed a hotel and served as the town’s Postmaster. Besides being noted for winning the poker game Fenton gained true fame as the 7th Lieutenant Governor of Michigan from 1848–1852. The town was initially referred to as Fentonville, but was organized as The Township of Fenton on March 6, 1838.

The Railroad Comes and the City Thrives

Fenton was the northernmost point on The Detroit Grand Haven and Milwaukee Railroad in the 1850’s. The significance of the railroad stop made the area an important trade center in Southeastern Michigan. The Fenton Railroad Depot was constructed in 1857. Unfortunately, the wooden edifice burned almost to the ground on March 19, 1923. The brick building that now stands on the site was constructed on the remnants of the buildings remains.

Following the installation of the rail line, Fenton was on its way to becoming the city we know and love today. For more on the history of Fenton visit the A.J. Phillips Fenton Museum and The Fenton Historical Society displays housed there.