If you’ve attended more than a couple of hockey games at Joe Louis Arena you undoubtedly know Cobo Joe’s. The sport’s bar and BBQ Smokehouse is a Detroit icon. From their location on Congress St., directly across from the Joe and Cobo Hall, Cobo Joe’s has served Hockeytown fans for the past 34 years. Inevitably in life, all things change. Such is the case for Cobo Joe’s. 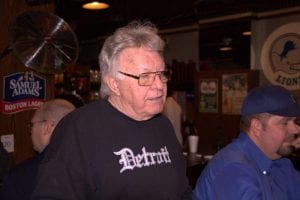 Cobo Joe’s owner, Richard Cadreau, knew his business faced a challenge when it was announced the Ilitch family planned on building a new arena for the Red Wings. Game nights packed the small bar as Wing fans celebrated the team’s 41 NHL home games. Annual trips to the playoffs added dates to the schedule. Cobo Center events and concerts at the Joe brought additional revenue to Cadreau’s business.

Cobo Joe’s lifeblood flows from the convention center and the arena next door. Patronage from area residents is minimal. Lunchtime business crowds never compare to a game night. A downtown Detroit bar provides little allure to the uptown party crowd without an event to draw them down the Lodge Freeway. Lion and Tiger fans have their hangouts closer to Ford Field and Comerica Park. The Red Wing’s move created a major paradigm shift for Cobo Joe’s.

Richard tried to anticipate. He reasoned the one-mile trip to Little Caesar’s Arena was doable considering the plethora of cheaper parking near Cobo Joe’s. Plus his reasonably priced food and drinks trumped the competition. Loyal clientele would still frequent his place. After all coming to Cobo Joe’s was a Hockeytown tradition. Richard purchased a bus limousine to transport his guests to the Wings new home. The magnitude of changing home ice sites hit Richard on the Wings opening night. Three patrons showed up to avail themselves of Cobo Joe’s tradition and accept the complimentary ride to the palace pizza built.

Little Caesar’s Arena is a beautiful facility. The plaza surrounding the actual arena offers a variety of options available to fans. Food and beverage entertainment seems to compete with the on-ice action. Attendance at the game now includes the before and after parties that supported Cobo Joe’s.

Adapt or Wither Away

Faced with the stark reality of generating new income Cobo Joe’s is adapting to the new landscape of downtown Detroit. Hockeytown has another nickname, one that predates the late 1997-98 Stanley Cup years that spawned the moniker. Since the early 60’s Motown is the universal handle used along with the Motor City when referring to Detroit.

So if you want to theme a business to attract customers in the heart of Detroit you might opt for cars or music. Cars are fun to drive, music is fun to listen to. Naturally, Richard chose music. In the 12-years Richard has owned Cobo Joe’s he’s perfected the sports bar motif. But, converting to a Motown music-themed hangout required additional expertise.

Nearing retirement Richard sought out individuals with the knowledge and desire to help Cobo Joe’s remain a must visit stop when downtown. Enter Delroy Thomas, Richard’s new partner. Delroy brings his business acumen as the owner of First Place Lounge. A popular cocktail lounge at 16921 Harper Ave. on Detroit’s east side. Joan Belgrave offered to promote the Motown sound citing her association with stars and tribute artists linked to the Hitsville music era. Joan is the wife of the late Marcus Belgrave, the legendary trumpet musician featured on many of the tracks recorded at Hitsville. Delroy met many of the performers and promptly hired Joan to provide the talent connection.

Joan, an accomplished vocalist, songwriter, and producer herself, performed with her husband and many of his Motown contemporaries. According to Delroy and Joan, “Detroit needs a place that pays homage to its fabulous music history. A place you can come and listen to those timeless hits performed by original contributors and those lending their talents in tribute.”

Motown music is alive in Detroit. Once again you can hear the sweet sounds of Jazz, Rhythm, and Blues that combined to provide the music that is so uniquely associated with the era of the 60’s. Here are some of the shows scheduled for the new Cobo Joe’s. All presented with no cover charge, just stop in and enjoy. 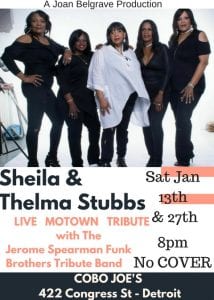 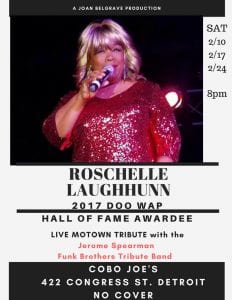 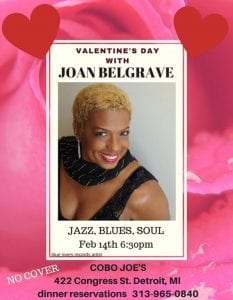 Shelia and Thelma Stubbs come from Motown Royalty … Levi Stubbs of the Four Tops. They provided two Saturday night performances in January. Roschelle, a vocalist with the Original Vandellas will treat fans three Saturday’s in February. Joan herself takes to the stage for a special Valentines Day set. Sure to be a popular couples evening out for the year’s biggest date night.

Looking for an evening of fun. Visit Cobo Joe’s on a Saturday night for a blast from the past. With a revamped menu, moderately priced drinks, and great entertainment how can you not enjoy yourself? Look for Delroy and Joan to expand their music nights. Richard’s legacy appears to be in good hands.

Stay current with all Cobo Joe’s events by following them on Facebook. Another visit is on my agenda, BBQ for me is enough of an incentive. Live Motown tunes while you eat, a bonus.