Who doesn’t like to play trivia? Are you among the group of television viewers who enjoy trivia style game shows? If so, you probably enjoy playing along from your couch at home. Do you shout it out when you know the answer?  Have you dreamed of being a contestant with a chance to win a big money prize? If so, you are not alone. Since networks began broadcasting content into our homes game shows have consistently proved their popularity.

In the age of smartphones, I am surprised it has taken so long for someone to develop an interactive trivia game that cashes in on the genre. Have you heard about HQ Trivia? The free cell-phone app is the fastest growing craze since Pokemon Go. But, instead of chasing imaginary figures you can only see on screen. You are working to pocket cash based on your general knowledge of stuff.

Got your attention? Here is a brief description of how it works. Download and install the HQ Trivia app. Register a username. Play Monday-Friday at 3:00 and 9:00 pm. Saturday and Sunday, only at 9:00 pm. Answer 12 multiple choice questions correctly and earn a share of the jackpot posted for that game. Yes, real cash deposited to your PayPal account. How much? Daily jackpots are currently running at $2,500 with higher stakes on the weekend. Last Sunday’s game offered $15,000 in prize money.

Ok, let’s answer the question everyone asks right from the start. If it’s free to download, free to sign up, and free to play, how can they afford to give away large sums of cash? Good question, I don’t know. But, it’s easy to make some assumptions. Get as many people hooked on the game as possible. (Nightly contests currently have 1 million plus players.) Expect the free app to have ads in the future. A paid version without ads may be in the works.

There is something called second chances. More on that later. In the future second chances could be offered for sale. Simple math, 1 million times 1 cent equals $10,000 dollars. Any number of revenue-producing options could be incorporated into future additions. Hey, you can opt out at any time. So, jump in early, have fun, and maybe win a bit of money. 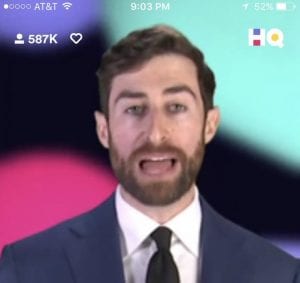 After playing a couple of times you get the hang of the basics. Open the app a couple of minutes before the start time. Make sure you have a good wifi connection, the game streams live. The host, comedian Scott Rogowsky pops on to guide you through the game. Celebrity guest hosts appear occasionally. You have 10 seconds to select your answer as soon as Scott starts reading the question. (Not enough time to get help from Siri.) Pick one of the three options shown on-screen below the displayed question. As soon as the clock expires you are told if your answer was correct. The app also displays how many people selected each answer.

The first time I played it seemed unbelievable that over 10,000 people did not know that “moo” was the sound a cow made. Question 1 is always simple, they get harder as you move forward. Much harder! If you give the wrong answer or fail to answer in time you’re eliminated from the game. Answer the final question and the jackpot is divided between you and the rest of the competitors that gave the correct responses. Ok, I confess. After playing 4 times the farthest I have progressed is Question 5.

There is running chat room at the bottom of the screen. Put a million people together and you are going to have some idiots making inappropriate comments. Swiping the chat section from left to right hides the comments. Besides, the chat is a distraction when trying to concentrate on the game. The app is currently in beta mode for Android users. It can be a bit glitchy. Given the reputation of the developers, that issue is likely to be resolved soon.

HQ Trivia is the brainchild of Rus Yusupov and Colin Kroll. The duo, along with Dom Hofmann, created Vine and then sold it to Twitter for $30 million. Don’t worry about taking some of their money, they can afford to fund games for quite a while.

Unless you have an incredible knowledge of all things trivia, the chances of winning are slim. You have a one in three chance of answering a question correctly just guessing. However, when guesses are spread out over 12 questions the odds get longer. Play with a group, more people contributing their wisdom improves the odds. 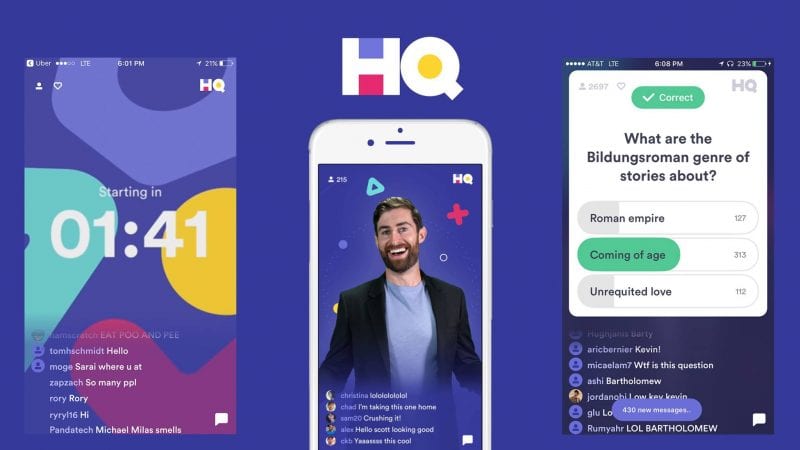 You can earn second chances by inviting friends to try the app. You can use a second chance once. Regardless of how many second chances you hold they can only be used one time during any game. Serious players save their chances until they get close to the last few questions. If you answer wrong on question eight or nine then use one. Hopefully, it helps you get within striking distance of question 12.  Another strategy is to save second chances for big money games on Saturday and Sunday nights.

Ok, pay attention here. To earn those second chances your friends have to type your User ID in the referral slot when creating their ID. My ID is “tlpsteve” hint, hint. So if you are setting up an account you could use an ID such as “tlpsteve” as the referral when you register. Then after getting your ID, share a copy of this article with a friend and give them your ID.

For a view of the whole experience check out the YouTube broadcast of the $15,000 jackpot show on Sunday, January 21st. The show features glitches in the first minute, yes they happen sometimes. Starting with 1.5 million players the field is narrowed to 7 winners. Each cashing in for over $2,000 each. See what to expect from Scott and how the game progresses through questions.

Ready to give it a try. Good Luck, have fun, and tell a friend.

What It’s Like to Play in a Pro-Am, Ally Challenge Pre-Tournament Day 2

Ally Challenge 2020 Opening Round, Two Tied for the Lead