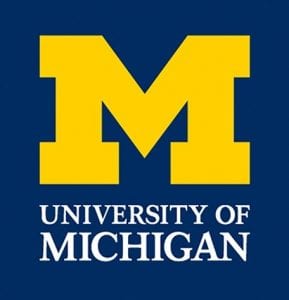 If you want to know something about the University of Michigan Wolverine Hockey team just ask Tony Skerjance. Tony is one of our favorite guys to talk to. He knows a lot about a number of subjects. Last year he gave us a heads up about Barnfest, Linden’s awesome 2-day music festival for charity. Tony knows cars. He is the Service Manager at Grand Blanc Mitsubishi. But his real passion is hockey. Especially U of M Wolverine Hockey. 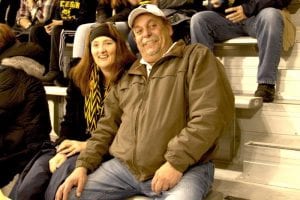 A season ticket holder, now in his fourth year, Tony hardly misses a game at Yost Ice Arena. He and girlfriend Erin sit 3 rows up from the ice on the goal line at the north end of the rink. When he’s not at The Yost you can find Tony in front of the TV catching the latest NHL game. Of course, Tony cheers on the Red Wings. He also keeps tabs on the Tampa Bay Lightning from his days in sunny St. Petersburg where he was a restaurant manager. But, that’s another story.

We thought it would be fun to follow Tony and Erin down to Ann Arbor and take in the excitement of Big Ten College Hockey.

Built in 1923, and according to mgoblue.com “Yost Field House was the largest indoor building of its kind on any campus in the United States. It was named in honor of Fielding Harris Yost, legendary coach of Michigan’s football teams from 1901-24 and Director of Intercollegiate Athletics from 1921 until his retirement in 1941.”

A multi-use arena Yost Field House was home to the Michigan Basketball team until 1967. Indoor track meets were held in the arena. The U of M Football and Baseball teams also practiced indoors at the Field House.

Four major renovations updated the building. The first in 1973 when the name was changed from Fielding H. Yost Field House to its current moniker as Yost Ice Arena. The latest facility upgrade occurred in 2001. Current seating capacity is 5,800.

The first thing you notice walking into the arena is how bright it is. Powerful lights focused on the white ice surface reflect throughout the building. The Michigan Hockey Band keeps things lively with pre-game music. They play an endless variety of quick hits during stoppages in play. Always ready with a rendition of “The Victors” at key moments in the game.

Concessions are plentiful, the event staff is friendly and helpful. Ushers high-five spectators whenever a Michigan goal is scored. Kids love the Snoopy Photo Spot in the lobby. Blasty, the Wolverine Trooper is ever present to pose with kids of all ages wanting a photo. The student section is rowdy and remains standing through the course of the game. Matching the tradition of football Saturdays at the Big House.

The Penn State Nittany Lions visit Ann Arbor to take on the University of Michigan Wolverines in tonight’s game. Penn State is the defending Big 10 Hockey Tournament Champions. Winning the title last March in the last college hockey game held at Joe Louis Arena in Detroit. Penn State brings a 13-8-3 record and #12 National ranking into the match-up. Michigan is 10-10-2 and ranked 20th in the nation. 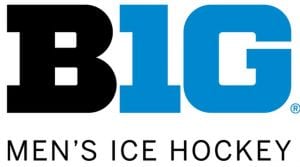 Michigan takes a 1-0 lead at 12:27 of the first period on a goal by #8 Jack Becker. They hold onto that slim margin going into the locker room despite being outshot 15-9 by the Nittany Lions. Tony’s prediction for the next two periods? “It’s going to get rough. Tight checking and physical play.”

Sure enough at the start of the second period, the hitting picks up. Not much room for any offense. At the 5:00 minute mark, Penn State steals an errant pass and has an uncontested breakaway towards the Michigan goal. Wolverine goaltender Hayden Lavigne reacts and stones the shooter, #7 James Robinson, with the best save of the night. With a heavy dose of defense, neither team scores in the second period. Shots on goal are down 11-9 this time in favor of the Wolverines. Tony is not comfortable with the slim lead. “I hate one-goal games.”

The third period starts in similar fashion, close checking and hard-fought battles for the puck. Penn State begins pressing, hoping to tie it up, taking some chances on loose pucks. At 10:38 Becker scores his 2nd goal of the night to give Michigan some breathing room. Tony breathes a sigh of relief. Four minutes later #9 Josh Norris scores to extend the lead. Then with just under 2 minutes left #11 Brendan Warren puts the puck in an empty net to seal the victory. 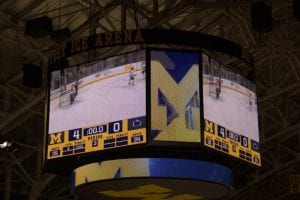 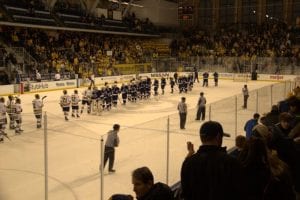 Tony celebrates the win. The Wolverines 6th in their last 9 games. We ask Tony and Erin if they are coming on Saturday? “Would not miss it for the world. It should be a real battle.”

After a short press conference, Michigan Coach Mel Pearson signs autographs in the hallway outside the locker room. A youth hockey team in attendance pushes mini hockey sticks, programs, and hats forward for Pearson to sign. One young man asks; “are you the main coach for the team?” Satisfied with the positive answer, the lad turns to display his prized signature saying; “he’s the real coach.” 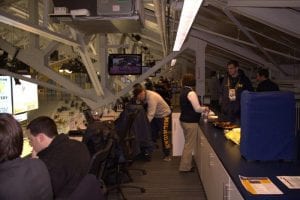 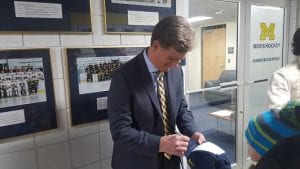 By the time I return to the press box, type a few notes, pack up the camera and computer, the arena is almost empty. Only a couple of fans remain taking advantage of the empty ice to snap a few photos from the Wolverine bench. Even Tony, one of the last couple dozen stragglers, has left the stands. Exiting into an almost empty parking lot indicates the drive out of town will proceed with minimal traffic. It’s almost 11pm, the 8 o’clock starting time made for a late evening.

Always popular with our readers, the photo gallery captures the sights, fun, and excitement of the event. We understand Tony’s fanatical attraction to a full season of Wolverine Hockey. Plan a visit to Yost Ice Arena, you might get hooked too.