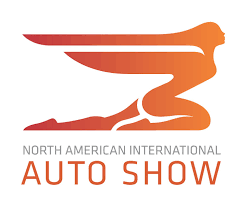 The 2018 North American International Auto Show (NAIAS) opens to the public this weekend. The annual Black Tie Charity Preview gets things rolling Friday night January 19, from 6 – 9 p.m. The doors open to the general public Saturday, January 20 through Sunday, January 28. Hours are 9 a.m. – 9 p.m. daily. Tickets can be purchased online at the NAIAS website. The Lasco Press received an invitation to attend the Industry Preview on Wednesday, January 17th. We are happy to share our impressions of this year’s show. Along with a photo gallery of some of the show’s sights, features, and the day’s activities.

Our thanks to the Metro Detroit Ford/Lincoln Parts Managers Club for the invite to attend their meeting/social gathering and providing passes to the show. The Club gives Parts Managers from local Ford and Lincoln dealerships an opportunity to gather approximately six times a year. Topics relative to the world of dealership parts and service are discussed. Input from Ford Motor Company is received and feedback is provided to the manufacturer on industry trends and issues. Current Club President Dan (Freddy) Kruger volunteers his time and talents to organize the events.

The Club’s annual visit to the Auto Show is prefaced with a late afternoon social gathering at Detroit’s iconic Cobo Joe’s for some BBQ and beverages. Then it’s just steps to the entrance of the NAIAS across the street at the Cobo Center. The food was scrumptious and our visit was highlighted by Cobo Joe’s owner Richard Cadreau stopping by the table to thank the club for their continued patronage and toast their on-going success. We talked to Richard at length about his 11 years as the owner of Hockeytown’s most famous sport’s bar. More on that subject later. After the early dinner, it was off to the auto show. 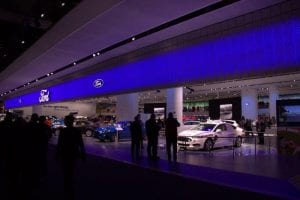 Entering the show through the first set of double doors in the Cobo Center you are struck by the size and appearance of the Ford exhibit on the right side of the hall. Blue lights combined with bright white columns and partitions match the Blue Oval logo which is prominently displayed. It’s not just the cars but the whole presentation of what the brand has to offer their customers. An upper level, accessible by up and down escalators, features Ford’s best selling truck line-up. The Ford spectacle offers, by far, the best interactive demonstrations of the show. Including many that will be visitor favorites throughout the course of the week. 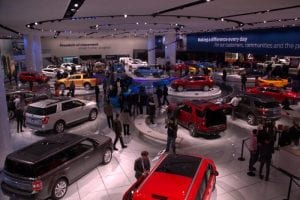 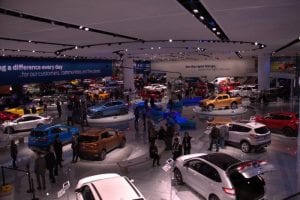 Let’s get right to it. One of the most anticipated introductions at this year’s NAIAS is the return of the Ford Ranger for the 2019 model year. 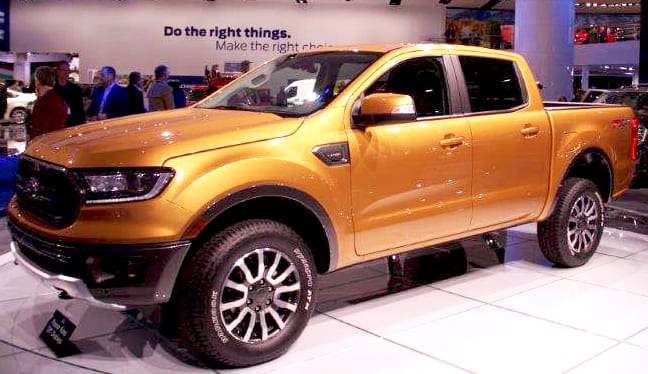 The 2019 Ford Ranger answers the call with an all-new midsize pickup. Featuring a new exterior design, chassis, and powertrain. Developed specifically for North American truck customers. Powerful and strong, with a high-strength steel frame. Ranger is equipped with a proven 2.3-liter EcoBoost® engine. Mated to the only 10-speed automatic transmission in the segment.

“Ranger has always held a special place in the hearts of truck fans,” said Hau Thai-Tang, Ford executive vice president, Product Development, and Purchasing. “The all-new Ranger is designed for today’s midsize truck buyer, delivering even more utility, capability, and technology for those who blend city living with more off-the-grid adventures on weekends.”

In 1968 the movie Bullitt starring Steve McQueen hit theaters much to the delight of the “big screen” viewers. The classic car chase scene through the streets of San Francisco is remembered by anyone who recalls the award-winning movie. On Press Day at the NAIAS, the 50th-anniversary edition of the famous green Mustang Fastback rolled onto the auto show stage. To the delight of everyone present, it was accompanied by the original car that was as much the star of the movie as McQueen himself. 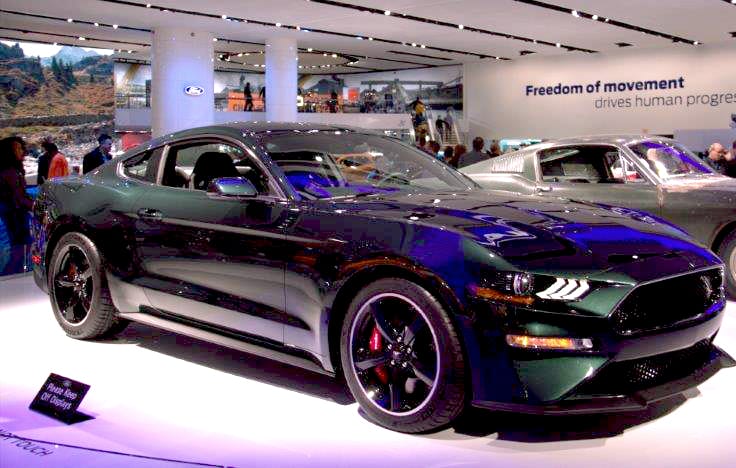 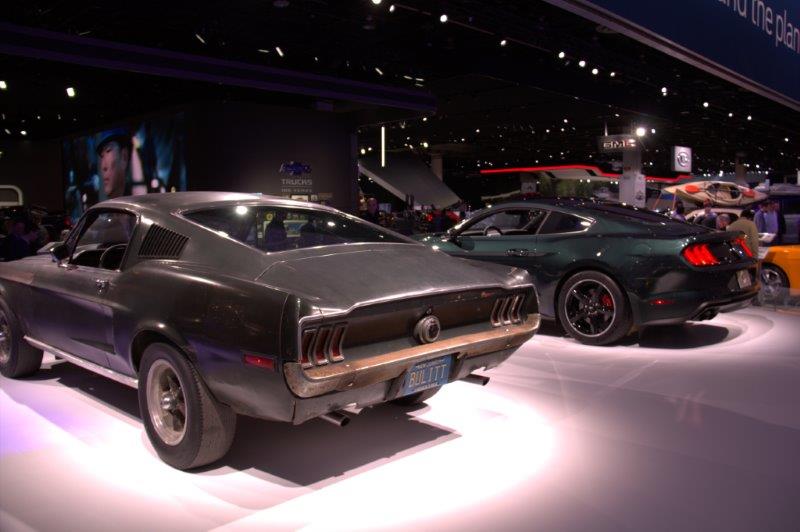 Two identical 1968 Mustang GT fastbacks were used in the filming of the classic Warner Bros. movie “Bullitt” that debuted in theaters on Oct. 17, 1968. After filming, the cars went their separate ways: the hero vehicle driven by McQueen in the movie was sold by Warner Bros. to a private buyer, and the other – used in many of the jumps during the famous chase scene – was sent to a salvage yard. That jumper vehicle resurfaced in Baja, California, in early 2017, but the other was lost to history. Until now.

Sean Kiernan, owner of the hero vehicle, inherited the car in 2014 from his late father, Robert, who had purchased the vehicle in 1974. To fulfill his family’s lifelong dream, Sean contacted Ford and the two parties worked together to reveal his movie star car alongside the all-new 2019 Mustang Bullitt at the 2018 North American International Auto Show in Detroit.

“You know, it was never our intention to keep this car a secret from everybody,” Sean said. “It just kind of happened with life. I’m just completely buzzing to join with Ford and the new Bullitt and show this car to the world on one of the biggest stages there is.”

As a special-edition model, due out this summer, the all-new Mustang Bullitt is equipped with a manual transmission, and the gear shifter features a white cue ball shift knob as a nod to the original. The vehicle packages all Mustang GT Premium and Performance Package content into a vehicle that maintains the original Bullitt’s understated persona.

Other standard equipment includes a heated leather steering wheel and a 12-inch all-digital LCD instrument cluster, identical in function to the cluster introduced on 2018 Mustang, but with a unique Bullitt welcome screen that starts in green with an image of the car rather than the pony.

“This new Bullitt is, as Steve McQueen was, effortlessly cool,” said Darrell Behmer, Mustang chief designer. “As a designer, it’s my favorite Mustang – devoid of stripes, spoilers and badges. It doesn’t need to scream about anything – it’s just cool.”

A third-generation member of the McQueen family, Molly, starred in a special movie of her own introducing the new third-generation Bullitt at the North American International Auto Show. In the film, Molly races a new Mustang Bullitt through a parking structure battling a Dodge Charger for the final free space.

As you make your way through the huge Ford exhibit there is plenty to see. Self Driving vehicles, special editions of main-line Ford models, a Ford GT race car,

If you are planning to attend the Auto Show don’t miss the interactive experiences that Ford has to offer. To feature the Bullitt Mustang a working movie studio is set-up in the far coner of the exhibit. You can take the place of McQueen’s grandaughter Molly in the promo video shown above. Directors walk you through the cameo shots, insert the clips into the video, and email you the finished copy.

Start by posing just like Steve McQueen in the original movie poster. 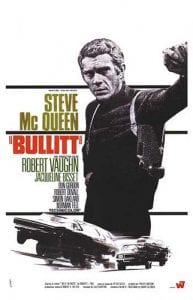 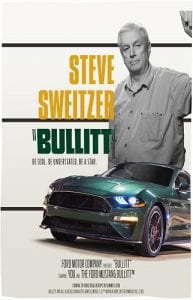 Then Star in Your Own Movie Clip

Experience the future of Ford Mobility in virtual reality.

Just duck inside the big helmet. Turn side to side for a full 360-degree view from the cockpit. 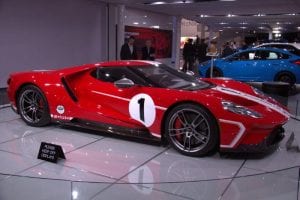 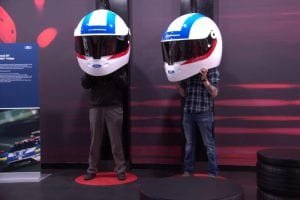 Build Your Own Lego Man or Woman

Choose your pieces, put them together, and pose them in a Ford Lego scene.

The Rest of the Show

If you can pull yourself away from the Ford Display there are some cool things to see throughout the expanse of the Cobo Center. Martin Truex Jr’s Monster Energy NASCAR Cup Series Championship car. The Bass Pro Shop #78. The Michelin Man makes appearances in the company’s tire display. Indy Cars, a GMC truck with snow treads instead of tires, some concept cars, and of course pretty hostesses to answer your questions. Plus the workers who make the show roll.

Some of the guys headed back over to Cobo Joe’s for a nightcap. Most headed home with a busy work-day instore for Thursday. As we mentioned Cobo Joe’s owner Richard Cadreau shared the story of his iconic Detroit landmark and the challenges of the Red Wings move to a new arena. Check back with The Lasco Press for a feature article on how Richard is remaking Cobo Joe’s in the face of a huge paradigm shift for his business. A good story.

2017 Ford Escape Lands in 'The Blacklist' and 'Blindspot' to Create...