Tyler Danielson had a goal – the 15-year-old Boy Scout wanted to earn his Eagle Scout rank 50 years after his grandfather achieved Eagle.

Tyler met his goal and will be among 229 Scouts who will be honored as Michigan’s newest Eagle Scouts on March 3 at the 2018 Water and Woods Recognition Dinner.  The celebration will begin at 5 p.m. at the Genesys Banquet and Conference Center in Grand Blanc.

Although Tyler will be one of many to receive his Eagle rank, he is the only Scout who will be honored with the Glenn A. and Melinda W. Adams National Eagle Scout Service Project of the Year Award.  The award recognizes valuable service of an exceptional nature by a Scout to a religious institution, a school, a community, or another entity while doing his Eagle Scout project.

The project Tyler chose to focus on was the restoration of the underbody of a retired P3 Orion aircraft which is housed at Selfridge Air Force Base in Harrison Township.  His grandfather, who was a flight engineer in the Navy, flew one of these planes between the mid-1970’s and mid-1990’s.

“Every year, my family goes up to air show at Selfridge and my grandpa is still in touch with his old crew and he actually gave me the contact information for his old flight crew,” said Tyler, who attends St. Clair High School.  “The plane has a bunch of panels on the underside held on with bolts.  The bolts are all corroded and some were falling out.”

Tyler assembled a crew of five people who volunteered their time from mid-July to late August this past summer to refurbish the aircraft. 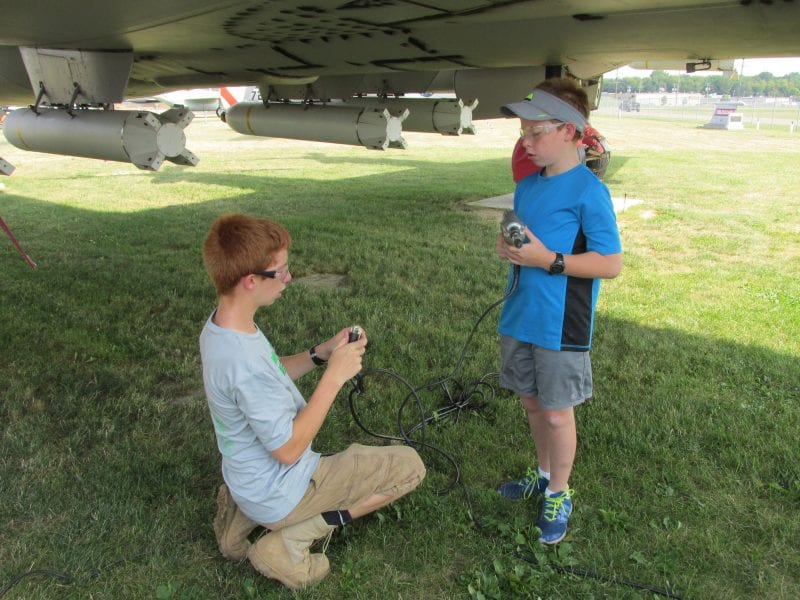 “We had a couple of corded drills and we stood overhead and drilled away the rust and had a couple of younger Scouts go behind us with handheld wire brushes and after that was done the bolts were primed and put back on,” Tyler said.  “We did some panels as well.”

Tyler is a member of Troop 216 which is part of the Water and Woods Field Service Council managed by the Michigan Crossroads Council, Boy Scouts of America.  He said he would like to attend the U.S. Naval Academy and become a flight surgeon.

“Each and every one of the Scouts we will be honoring Saturday deserves high praise for the projects they’ve done to make a positive and lasting impact in their communities,” said Gary Gilger, Chief Operating Officer for the MCC and interim Scout Executive for Water and Woods.  “They will use the life and leadership skills they’ve learned in Scouting to achieve success in all areas of their lives.”

In addition to recognizing the Eagle Scouts, Venturing and Sea Scout awards also will be presented during the dinner.

For additional information about the MCC, visit www.michiganscouting.org.

Three Players Lead the U. S. Open Heading Into the Final...