Qualifying for the Daytona 500 is unique. One car at a time, drivers take to the track. Lap times and speeds are recorded. The two fastest qualifiers lockdown starting positions on the front row. The remainder of the field is set in qualifying races on the Thursday before the 500.

The last time the Daytona 500 pole winner also won the race? Dale Jarrett accomplished the feat in 2000. But, running near the front of the pack is important if you want to avoid the “Big One.” The crash that invariably takes out a significant number of contenders. So, staying near the front is easier when you start at the front.

A total of 40 cars are entered for the 60th running of the Great American Race. With 40 spots available in the field no one goes home after qualifying. All drivers take a lap in Round 1, the fastest 12 advance to Round 2. Lap times are erased and the top 12 drivers compete for the front row pole spots. 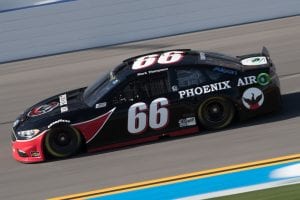 Driver’s hit the track based on their practice speeds, the slowest heading out first. Mark Thompson(66), driving the Phoenix Air Racing Ford, did not post a quick time. His speed of 186.463, only the 37th fastest. However, he is the fastest driver of the senior competitors. Thompson’s age? The same as his car number, 66.

Speeds and positions of notables drivers.

Alex Bowman(88) posted the fastest time in Round 1. He followed it up with a speed of 195.644 mph in Round 2 to lock up one of the front row starting spots. Denny Hamlin(11) took the other pole position with a run of 195.092 mph. Bowman, who filled in for Dale Earnhardt Jr. previously, has run too many races to qualify as a rookie. However, 2018 will be his first full-time ride on the Monster Energy NASCAR Cup Series circuit.

Hamlin, the 2016 Daytona 500 winner, just missed qualifying for the Championship race last year. His battles with Chase Elliott(9) during the playoffs cost him the opportunity at his 1st Cup Championship.

The remainder of the top 12 qualifiers

The race is the first opportunity for drivers to test conditions in large pack driving. During the first half of the event, the pack produced exciting side-by-side and 3-wide racing. The new aero package on the 2018 cars seemed to loosen up the handling quite a bit. It still takes helps to pass. But, cars can get a run when they pull out of line with a pusher.

Chase Elliott drove to the front early. Adding to the number of laps led by the #9 car at Daytona. Just past the halfway point, the field strung out in single-file racing. The Ford’s did not qualify well. However, in the draft, they seemed to come alive. At least, Team Penske did. Keselowski, Blaney, and Logano ran 1-2-3 as the laps wound down.

Everyone remained nose to tail until the final lap. Blaney jumped out of line to make a run at the lead. No one dropped down to follow him. Logano closed up to Keselowski with a push from Johnson. Going down the backstretch everyone scrambled to choose the fastest line. Out of line, Blaney began to fade back. Kurt Busch, in fourth, pulled down in front of him to make a run at the leaders. Everyone else chose the line they wanted to follow.

Kyle Larson had been following Busch. He surged ahead to fall in line behind Johnson. Unfortunately, with a bit too much momentum. Larson ran into the bumper of Johnson and sent him spinning. The remainder of the field swerved to avoid the wreck causing more carnage.

Keselowski held off Logano to take the checkered flag. Good news for driver’s starting well back Sunday. Keselowski started dead last in 17th and was still able to drive to the front. Busch finished third and Blaney recovered to take fourth. Giving Ford a 1-4 finish, with three of the cars belonging to Team Penske. Austin Dillon rounded out the top five.

Next up, The Can-Am Duels. The first of the two qualifying races takes the green shortly after 7 pm Thursday evening. The second, approximately 15 minutes after the conclusion of race 1.