Qualifying for the Daytona 500 last Sunday set the front row for the Great American Race. The remainder of the starting line-up is set based on how drivers finish in the Can-Am Duels Thursday night at the World Center of Racing.

After the Ford Performance domination in the Advance Auto Parts Clash, everyone wanted to know if it was a fluke. Pole sitter Alex Bowman(88) dropped out of line after taking the green. Bowman’s car was set for qualifying and not race trim. Too loose in the draft, so to avoid wrecking, getting out of the way was the smart move.

Three laps in and Team Penske is running 1-2-3. No fluke! Brad Keselowski(2) lead the trio of twos as the pack strung out quickly into a single file line.

Eight laps in and Jimmie Johnson(48) complains of a vibration. He pulls down out of line coming through the tri-oval to sort the issue out. The right rear tire goes down and Johnson goes around. Climbing the bank he wrecks Aric Almirola(10) in his first ride in the Stewart-Haas entry that Danica Patrick drove last year. 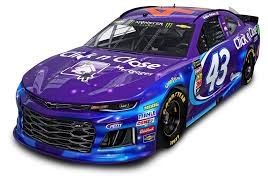 On the restart Team Penske again resumes the lead. Joey Logano(22) to the front. New teammate Ryan Blaney(12) in second and Keselowski third. Darrell Wallace Jr. raced his way into the top 5 and his car looks good. Has the “King” finally found his prince? No Petty Blue on the 43 car for the 500, its Royal Purple for new sponsor Click n’ Close.

Last year’s restrictor plate wiz-kid Ricky Stenhouse Jr.(17) gets trapped at the rear of the line. His Ford seems very stable, he can drive it anywhere, dropping to the bottom of the track frequently. Unfortunately, no one will go with Stenhouse to move him forward.

With the new rules package, the cars are running faster. However, stability in the draft is a problem. The cars move around more, even on the straightaways. Stenhouse ducking in and out of line behind rookie William Byron(24) and takes the air off Byron’s spoiler. The 24 spins and wrecks out of the race.

Just after the restart, Stenhouse does the same thing to David Gilliland(92) sending him to the garage on the back of a wrecker. Meanwhile, the Penske boys still have a stranglehold on the front of the pack. The restarts prove no problem as the three find each other and line-up quickly.

They may be teammates but when it comes to winning the race it’s every man for himself. As the laps wound down Blaney made his move to take the lead with two to go. That triggered a scramble among the followers behind the top three. Keselowski got tapped by Ryan Newman(31) and wrecked probably the best car in the field. Will the backup be as competitive? Something to watch for on Sunday.

Bubba Wallace still running in the top 5 avoided the melee and moved into third. As the race went to an overtime restart. Wallace followed his friend Blaney off into the first turn. The two-car draft edging ahead of second place Logano. Last year’s 500 winner, Kurt Busch(41), joined the battle as did Stenhouse; having worked his way to fifth.

Unlike Bowman in Duel 1. Denny Hamlin(11), the pole sitter for Duel 2 took the green flag and sprinted to the lead. The fact that Hamlin qualified on the front row in a car set to race and not just go fast for a single lap should worry the field.

Hamlin led for the first 11 laps until another aero incident proved what occurred in Duel 1 was not a fluke. Chase Elliott(9) hanging on the left rear fender of Erik Jones(20) caused last year’s Rookie of the Year to spin just like Byron and Gilliland did in the first race.

The Fords of Kevin Harvick(4), Clint Bowyer(14), and Paul Menard(21) hooked up and started a move to the front just prior to Jones spin. After the restart, they drove around Hamlin and reasserted the Ford Performance superiority.

Halfway through the race, it appeared the drivers were ready to race, not just line up and drive. Hamlin resumed the lead briefly. Chase Elliott, driving the number 9 his Daddy made famous, drove to the front. Even Danica Patrick(7) moved from hanging out safely at the back of the pack into the top 10.

A bit of side-by-side racing led to some driver’s getting caught in three-wide battles. With the stability issues clearly a concern, no one seemed to have the desire to hang in the middle lane for long. Look for triple wide formations to be virtually non-existent on Sunday.

As the field straightened out into a single file line, Elliott remained out front. Hamlin settled into second and Harvick moved to third. Jones recovered from his spin to run in seventh. Danica, with no backup car, returned to the safety of the rear of the pack. Surprisingly she was joined there by last year’s Cup champion Martin Truex Jr.(78).

With three laps to go, the shuffle for the lead began. The Fords hooked up and punted Hamlin out of second. However, Elliott hugged the bottom of the track and fought off challenges in the last two laps. Harvick finished second. Erik Jones drove to a strong finish and took third. Bowyer finished fourth and Kyle Busch took fifth. Paul Menard finished seventh in his first ride with the Wood Brothers. With an eighth-place finish, Trevor Bayne gave Ford four of the top eight spots in race 2.

Sunday’s 60th edition of the Daytona 500 airs on Fox at 2:30 pm. The opener for the 2018 Monster Energy NASCAR Cup Series should prove to be an exciting affair. Get the full story here at The Lasco Press.