Sitting in the grandstands at Atlanta Motor Speedway it’s not hard to spot the knoll rising above turn one, just outside the confines of the racetrack. The incline is bordered by a single row of trees and a fenced perimeter. Campers occupy the fields on both sides of the chainlink fence. If you look closely it’s possible to spot the vertical grave monuments. Binoculars provide a better view of what is surely the most unusual location for a graveyard. 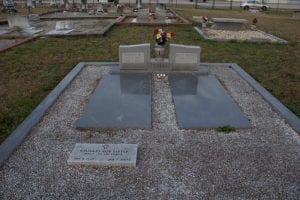 Over the years I have been to Atlanta Motor Speedway many times and never noticed the cemetery on the grounds of the complex. Only while taking a media shuttle ride did I spot the burial grounds. To my surprise, amongst the century-old grave markers there stood some modern style memorials carved into pristine granite headstones. Certainly, something a curious journalist would like to investigate. 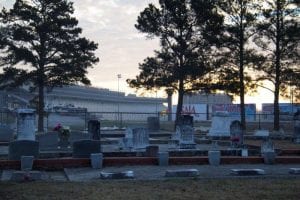 Inquires to fellow media members provided no insights. Even Reed Spencer, the dean of NASCAR journalists, was unfamiliar with the details of this unique feature of the Speedway. Ultimately I was referred to Atlanta Motor Speedway President Ed Clark. Here is where modern history becomes clear. According to Ed, “A family with ties to the former Church that sat adjacent to the cemetery still owns the property. They are area neighbors of the Speedway and we respect their rights to the site and its importance to the family. We maintain the grounds for them and assist with access whenever they require it. They are good people and we share a great relationship.” 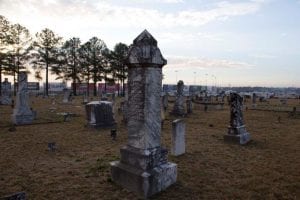 When construction began on the Speedway the church sat adjacent to the cemetery. Ultimately, the speedway purchased the church portion of the property and dismantled the building. Rumor has it that boards from the old church were used as construction forms for pouring concrete and other miscellaneous jobs. When the boards were no longer needed they were burned.

When first opened, what was then called Atlanta International Raceway, the track was plagued with multiple rainouts. Possibly spawning the legend that burning the wood from the church angered the Almighty, who then cursed the place.

Walking through the burial grounds is a sobering experience. The distinction between those buried there is evident in the type of marker that adorns the grave. The well-to-do of the late 1800’s have plots featuring carved headstones, boxed crypts, and even metal grave covers. Those without the financial means to afford such a memorial are buried under rocks set on end, nameless small flat headstones, or a marker with just initials carved into the face.

Still an active cemetery. Modern graves sit in segmented areas surrounded by bricks laid lengthwise. They contain beautifully carved granite memorials, some adorned with flowers or other decorations. The modern look provides a stark contrast to aged and weather-beaten monuments of a bygone era.

Just as you cannot go to Martinsville Speedway and come away without eating a famous slaw dog. You should not leave Atlanta Motor Speedway without pausing to pay respects at the gate of the graveyard. A backdrop of billboards advertising Saia, O’Reilly, Southern RV. Coca-Cola, QuickTrip, Papa Johns, and the Atlanta Air Show frame the cemetery. The roar of engines throughout the racing season provides a contrast to the traditional thoughts of “rest in peace.” However, for the living members of family buried there, it is a solemn place.

Many of the old gravestones on the site are weathered to the point they are no longer readable. Others lay cracked or broken in various states of disrepair. Hidden among the monuments are stories from long ago that are no longer told. Family members died off or moved away. The few current memorials are well cared for. It seems a shame to let the history and significance of the other graves wear away and crumble.

Kyle Larson Goes Back to Back at MIS

NASCAR Behind the Scenes: Media Coverage