In what may be the only racing action at Atlanta Motor Speedway this weekend. The NASCAR Xfinity Series and NASCAR Camping World Series driver’s ran a doubleheader today. Trying to beat a potential washout on Sunday, NASCAR moved the start time for the Folds of Honor 500 up an hour to 1:00 pm. However, the weather forecast is not promising.

Harvick started in the fifth position. By lap 20 he worked his way to the lead and held it until the caution waived 4 laps from the end of Stage 1. Harvick pitted while Logano chose to stay out and wait for the stage ending caution to make his stop. Should they race tomorrow, everyone should take a lesson from Harvick’s decision. Tires are everything at Atlanta.

The race restarted with one lap to go to the green and white checkered flag signifying the stage end. Harvick started 10th, the nine cars in front of him restarted on old tires. In one lap around the mile and a half Speedway, Harvick drove to the front to win the Stage. Logano, the leader at the restart, finished fourth. Three more driver’s with fresh tires passed him on the final lap.

Harvick led every lap of the uneventful 40-lap Second Stage. Profiting from the fastest stops on pit road he exited the pit lane after the stage ending caution stop still holding the top spot.

The 83 lap final segment of the race requires a pit stop at some point. It may be the only opportunity for anyone to take a shot at Harvick. Green flag stops for the leaders began with 38 laps to go. Harvick pitted three laps later, making sure no one outdistanced his car to end on fresher tires. He resumed the lead as all the lead lap cars cycled through pit road.

Harvick easily pulled away over the final segment of the race. Lapping all but six of the 40 cars that started the race. Logano finished second, four seconds back. Bell took third, six seconds behind. The remainder of the lead cars, John H. Nemechek(42) fourth, veteran Elliott Sadler(1) fifth, and Justin Allgaier(7) sixth. Austin Cindric(12) in seventh, the final car on the lead lap.

With the sun starting to dip down off turn 2 and what appears to be storm clouds already forming, the Trucks took the green flag in the NASCAR Camping World Truck Series. The Active Pest Control 200 is scheduled to run 130 laps. Two Cup regulars entered the race, Kyle Busch(4) and Daytona 500 winner Austin Dillon(20).

Busch qualified on the pole. But, it was Noah Gragson(18) driving for Kyle Busch Motorsports immediately jumping to the lead. Gragson held on to the top spot for all 40 laps in Stage 1, taking the green and white checkered flag. Matt Crafton(88), the outside pole sitter, finished second. Busch third and Dillon, a non-factor early, placed 15th. After stage ending pit stops Crafton exited 1st. Busch restarts third and Gragson fifth.

Racing off into turn 1 on the restart the trucks went three wide. Crafton maintained the lead, Gragson got shuffled back to ninth. On lap 51, Johnny Sauter took the lead and dragged Busch with him past Crafton. Two laps later Busch moved to the point and began to pull away from the field.

The caution flag flew on lap 59 for debris on the front stretch. On the restart, Busch fended off a challenge from Brett Moffitt(16) to maintain the lead. Sauter in third, Crafton in fourth and Gragson rounded out the top five. Busch again pulled away and led by 1.2 seconds at the end of Stage 2.

During the Stage ending caution, the last of the Xfinity haulers exited the Speedway through the tunnel under turn 2. A bright orange sunset highlighted the west end of the track over turns 1 and 2. After pit stops, the top five shuffled out with Sauter in the lead, Busch in second, and Crafton in third. Moffitt sat fourth and Jesse Little(97) restarted in fifth, just ahead of Gragson. 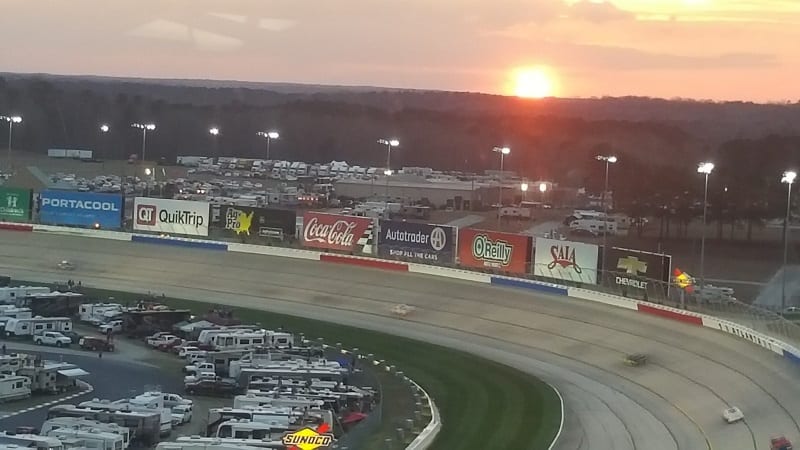 Busch stumbled slightly on the restart allowing Sauter and Crafton to pull out to a half second lead. One-by-one Busch picked off each of the pair and resumed the lead with 37 laps to go. Fifteen laps from the end, Busch built the lead to two seconds over Sauter.

Caution on the backstretch with seven laps to go is sure to make for an exciting finish. Having watched the Xfinity race it is certain that everyone will come to pit road for new rubber.

Trouble on the right front wheel cost Busch precious time in the pits. Busch opted to leave the pits after just right sides. Unfortunately, his crew had already removed the lug nuts on the left rear. As he exited pit road along the apron of turn one, the left rear wheel came off the truck. Busch backed all the way to his pit, but still lost a lap while his crew completed the service on the left side.

Lining up for the restart Matt Snider(13), who only took two tires led the field. Sauter started second, Moffitt third, Little fourth, and Crafton fifth. As expected the field jumbled up three and four wide after the drop of the green. Moffitt went low into turn one and exited turn 2 with the lead. He stretched it out to 10 car lengths down the backstretch.

Remarkably the green-white-checkered finish happened without another caution. Moffitt claimed the win. His second in the Truck series and the first for his new team Hattori Racing Enterprises. Gragson finished second, Sauter third, Ben Rhodes(41) fourth, and Crafton took fifth.

We will be keeping our fingers crossed for a break in the weather tomorrow to get the Folds of Honor 500 in. Check for more live coverage from The Lasco Press as we visit the Fan Zone and bring you photos of all the fun.

Party With the Die Hard Race Fans in the Daytona Infield