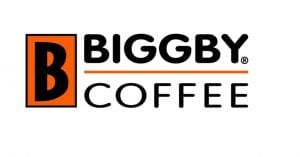 The radio advertisement said to stop by the Biggby Coffee location on Highland Road in Hartland Wednesday morning for free coffee. In addition, Company CEO’s Bob and Mike would be on hand to meet and greet customers.

Honestly, I am not a coffee drinker. The free beverage offer was not what caught my attention. The opportunity to speak with the guys who founded and run Biggby Coffee, that was the motivation for the early morning drive to Hartland. 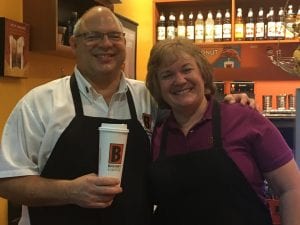 Biggby Coffee locations dot the tri-county area. The Hartland store is situated at 11325 Highland Road, also known as M-59. It’s approximately 1 mile East of US Hwy 23 on the north side of the 4 lane roadway. Walking in I was greeted by Sarah, one of the corporate representatives on-hand for the occasion. She introduced me to Mike Bogues. Mike and his wife Denise are the Owner/Operators of the Hartland Biggby franchise.

Mike explained that Biggby Ceo’s Bob Fish and Mike McFall were on hand to greet customer’s and pick up the tab for the free beverages being offered. The event is referred to as a “SPOT BaM.” Given the crowd constantly shuffling through the door during prime morning brew time, the business generated proved to be a boon for the Bogues. 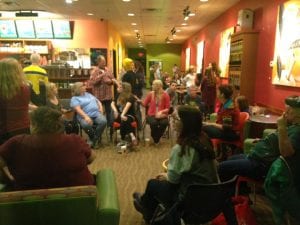 In a tour of their store past the busy front counter Mike explained the whole purpose of the layout is to make people comfortable. Lounge chairs offer a spot for relaxed conversations. Tables surrounded by chairs provide a place to sit and work or talk business over a latte or espresso. In the back of the store, Mike showed us a conference room free to customers for meetings or casual get-togethers.

Speaking with Mike and Denise you quickly realize they are not so much selling coffee as building friendships. On the Values page of the Biggby Coffee Website, you find their corporate philosophy. “We exist to…Love People. We have a genuine interest in everyone who comes through our doors. We can’t wait to get to know each and every person and to find a way to make them feel loved.” That message comes through clearly when talking to Bob and Mike.

We had the opportunity to speak with Biggby Coffee CEO Bob Fish and immediately the conversation centered around people. How Mike and Denise were so well connected to their community. The customers who frequented the store telling Bob how much they appreciated the friendship of the Bogues and their staff of Baristas. To quote Bob, “Coffee is a venue for people to meet.”

Bob is also proud of the company’s success. Since opening their first store in East Lansing in 1995, they began franchising in 1999. Today they have 257 franchises, most in Michigan, but actively growing in states throughout the Mid-west.

Since it’s inception the most publicity the company received centered around the name change their stores went through in 2006. Originally founded as Beaners, because they thought it was a hip catchy name with the link to coffee. Innocently, the two guys from Michigan were unaware of the name’s reference as a racial slur. Primarily in other sections of the country.

According to Bob, they debated what to do. Changing the name of the business is a major undertaking. Ultimately they decided it was the right thing to do and redubbed their business Biggby. With the single letter “B” on an orange background. Their logo was, in fact, a “big B” thus the new moniker.

With 60 stores in operation the change over cost 1 million dollars. Bob and Mike absorbed the cost and did not pass on the expense to their franchise holders. The voluntary move returned an incredible amount of good karma to the business. The national front page news generated by the decision ultimately provided a bump in business that led to additional growth.

As we concluded our conversation, store owner Mike Bogues came up to tell us a story a customer had just shared with him. The customer with her young child in arms caught Mike’s attention and called him over. “Mike listen to this.” She then addressed the child and said, “Tell Mike your word.” “BigB” was the reply. Followed by “what else can you say?” “MochaMocha.” It appears the next generation of coffee buyer’s is already well in training. 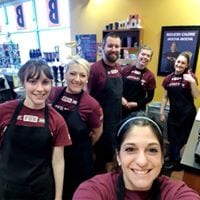 Mike was not going to let me leave until I spent some of Bob’s money on a beverage for myself. Having no familiarity with the Biggby Coffee menu, I quickly scanned the board over the counter. The Mello Hot Chocolate caught my eye. A combination of marshmallow and hot chocolate. It was delicious. Cocoa Carmella and Mint Hot Chocolate also looked appealing. Yes, I will be making a return visit soon.

Biggby Coffee stores also offer fruit smoothies and a limited number of food items for those customer looking for a different type of refreshment. As well as a complete collection of Lattes and flavored coffees.

In addition to the store in Hartland, there are several Biggby Coffee locations in our area. The Fenton store is located at 235 N Leroy St. Grand Blanc has a franchise in the Genesys Regional Medical Center and at 2223 Hill Rd. The Biggby Coffee website provides a locator to the store closest to your address or zip code.

Check out the following video of Bob and Mike discussing their favorite drink.

Sit down with Bob and Mike

Sit down with the founders of BIGGBY® COFFEE and learn about their favorite drink, the Americano!