Kevin Harvick(4) won the last two Monster Energy NASCAR Cup Series races at Atlanta and Las Vegas. This week at ISM Raceway in Phoenix he is the favorite to make it three in a row. Martin Truex Jr.(78) won the pole for the TicketGuardian 500. Harvick starts 10th. However, Harvick was the fastest in both of the final two practice sessions when the cars are set-up in race trim.

Kyle Larson(42) went to the lead from the front row and held the point until Corey LaJoie(72) blew up the engine in his car on Lap 25. The resulting caution brought the field to pit road. Truex Jr. exited first. Harvick, who had worked his way to sixth, picked up one more spot exiting the pits in fifth. On the green flag restart, Larson again resumed the lead. Harvick continued to chip away at the leaders picking up more positions on the track. 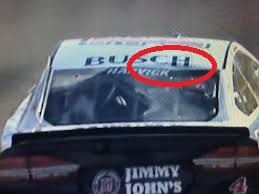 Harvick’s dominance over the past two weeks was tempered somewhat by the penalty the team received after Atlanta. A rear window brace failed. It caused the back of the roof to cave in when the car was at speed. Pictures posted on social media brought extra attention to the problem. NASCAR penalized the number 4 car seven playoff points and 20 championship points. Fines and a car chief suspension also cost the team for the infraction.

It is unlikely Harvick gained a competitive advantage from the issue. Still, fans debated the outcome of the race all week. Our opinion? He would have won the race anyway, regardless of the aero situation.

Kyle Busch(18) drove to the front passing Larson with 17 laps to go in the 75 lap Stage 1. Harvick moved into second place during the final laps of the Stage.

Kyle Busch scored his first stage win of the 2018 season. Exiting the pits after the Stage ending caution Kyle Busch maintained the lead. He was followed by Kevin Harvick, Denny Hamlin(11), Chase Elliott(9), and Brad Keselowski(2). The top five cars leading the race going into the start of Stage 2

Kyle Busch held the lead until lap 47 of Stage 2. Larson spun in turn 3 bringing out the second incident related caution of the day. On the pit stops, Keselowski changed only two tires and exited the pits first. Followed by Busch, Truex Jr., Elliott, and Kurt Busch(41). Harvick restarted 6th.

Chris Buescher(37) suffered a flat right front tire and hit the wall with five laps to go in the Stage. Setting up a one-lap sprint to the green and white checker. Kurt Busch(41) took the Stage win followed by Keselowski, and Ricky Stenhouse Jr.(17). Giving Ford a 1-2-3 finish.

The final stage consists of 162 of the 312 total laps that make up the TicketGuardian 500. On lap 189 Paul Menard crashed his Ford in turn 2 when a rear tire went down.  A tough break for the Wood Brother’s team who entered the race 10th in the season points.

The Battle for First Heats Up

With 85 laps to go, it was a three-car race. Hamlin, Harvick, and Kyle Busch ran nose to tail jockeying for the lead. Busch moved to second with 71 laps to go. With 69 to go Kyle Busch took the top spot. As the leaders ran side-by-side, Chase Elliott joined the battle for the top spot.

The leaders began their final green-flag pit stops with 57 laps to go. Kyle Busch pitted with 52 to go surrendering the lead. As the field sorted out after pit stops Elliott moved to the front of the group. Harvick, Hamlin, Busch, and Truex Jr. followed. Ryan Newman(31) and Keselowski led. But, they were out of sequence with the leaders and unless the caution flew soon they would have to pit.

Keselowski pitted with 27 laps to go. Newman entered pit road with 23 to go. Harvick then led, followed by Kyle Busch, Elliott, Hamlin, and Truex Jr. With 15 to go Harvick had a one second lead on Busch.

Harvick maintained the lead to the checkered flag, winning three in a row for the first time in his career. The last driver over the age of 40 to three-peat? Harry Gant in 1991. Joey Logano was the last driver to accomplish the feat. He did it in 2015.

The win makes Harvick the early season favorite to win the championship. Can he make it four-in-a-row? Harvick has one win at AutoClub Speedway in Fontana. The AutoClub 400 is set for a 3:30 pm start next Sunday on Fox.