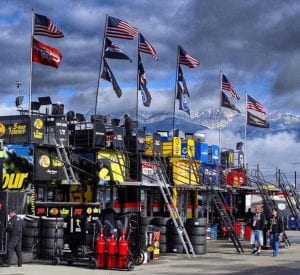 The Monster Energy NASCAR Cup Series completes its Western swing at Auto Club Speedway in Fontana California. The Auto Club 400 features Kevin Harvick(4) racing for his fourth Cup Series win in a row. The big news out of Fontana, California this weekend concerned the 13 cars that failed inspection. The penalty? None of the drivers were allowed to qualify and must start at the rear of the field.

All four entries from Hendrick Motorsports, Alex Bowman(88), William Byron(24), Chase Elliott(9), and Jimmie Johnson(48) were found to be illegal. For Elliott, it was the second penalty in a week. After last weeks race at ISM Speedway, Elliott’s team was docked 25 points for issues with the rear suspension.

Martin Truex Jr.(78) won the pole with Kyle Busch(18) starting next to him on the front row. Harvick qualified 10th after a small bobble during pole qualifying cost him precious time. His practice times still indicated he was the car to beat.

Harvick steadily moved towards the front during the first 60 lap Stage. However, with 23 laps to go in Stage One, he battled Kyle Larson(42) out of turn two. Larson drove up to Harvick’s left rear quarter-panel causing the 4 car to get aero loose. Harvick managed to straighten the car out. As Larson passed on the inside Harvick moved down, apparently to show his displeasure with the tight racing. The two cars made contact and Harvick again got loose.

Unable to save the car this time, Harvick smacked the backstretch wall hard with the right front. The car spun around and hit the wall again with the rear bumper. Effectively ending any chance at the four-peat. After repairs, he returned to the track two laps down and lost another lap due to being slowed by the damage the car experienced. Larson continued with minor sheet metal damage his crew was able to repair.

Truex won Stage 1 for his first Stage win of the year.

On the restart to begin Stage 2, Truex and Joey Logano(22) lined up at the front after quick pit work got them back on the track ahead of the rest of the field. Truex spun his tires as the green flag flew and Logano took the lead. Despite Harvick’s misfortune, the Fords continue their early season strength. Stewart-Haas Racing and Team Penske have all seven of their cars in playoff position after the first four races of the year.

Truex ultimately regained the lead and held it until Trevor Bayne(6) cut a tire and hit the wall with 12 laps to go in Stage 2. Paul Menard(21) also brushed the wall and the pair of slow cars on the track brought out the caution. After pit stops Truex exited pit road first followed by Kyle Busch. The restart leading to the end of Stage 2 mirrored the front row at the start of the race. With the same result at Truex went to the lead.

Truex held on for the Stage win. He is the only driver to have won both Stages and gone on to win the race. Accomplishing the feat twice in 2017. Will Fontana mark the beginning of the Furniture Row Racing’s team run to another title?

With 80 laps making up the final stage drivers are focused on putting themselves in a position to win. Especially Kyle Busch(18). Running near the front all afternoon, Busch struggled with the handling. His team kept adjusting the car and he drove to the lead early in the final stage.

Kyle Busch fought off several challenges from Truex until finally surrendering the lead with 39 laps to go. Both drivers pitted with 37 to go and Busch retook the lead with the faster pit stop. With 32 laps to go Kyle Busch slipped slightly exiting turn 2 allowing Truex to resume the lead. It was reported that during Busch’s pit stop his crew made a chassis adjustment to tighten the car up. Unfortunately, they turned the jack screw the wrong way resulting in loosening up the rear end of the 18 car.

Truex moved out to a seven-second lead over Kyle Busch. Larson caught Busch and passed him for second place. But, he could not make a run on Truex. At the checkered flag, Truex was 11.65 seconds up over second place Larson. Kyle Busch took third, Keselowski, and Logano rounded out the top five. Harvick finished 35th out of 37 cars, nine laps down. The win pushed Truex to the lead in the Championship point standings. He is the third driver to lock down a playoff spot this year.

Chase Elliott Gets 1st Cup Win at The Glen