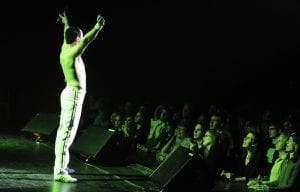 Rock fans still mourn the loss of Freddie Mercury, lead singer of Queen. The list of hits from Mercury, Brian May, Roger Taylor, and John Deacon are some of the most iconic tunes of the classic rock era. Bohemian Rhapsody, We Will Rock You / We Are the Champions, Another One Bites the Dust, and Fat Bottomed Girls automatically get you singing when you hear the lyrics.

This Saturday, for one night, you can relive the magic of Queen. The Whiting, on the Campus of the Flint Cultural Center, is hosting One Night of Queen. 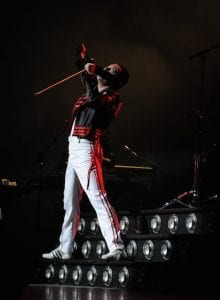 As the rock stars of the 60’s and 70’s slow down with age, tribute bands offer eager fans the opportunity to still bask in the music. Tribute band may not be an accurate description of One Night of Queen. A reprisal of the Freddie Mercury stage persona accompanies the vocals that Gary Mullen belts out. Often described as Mercury reincarnate.

Gary first channeled Freddie Mercury on the British television show “Stars in Their Eyes.” Gary won the overall Live Grand Final, polling 864,838 votes. More than double the runner-up and setting the all-time record for votes on the show.

Touring now with his band, The Works. Gary brings the unique stadium show, Queen famously perfected, into intimate arenas to the delight of avid fans. Billy Moffat on bass, drummer Jon Halliwell, Malcolm Gentles at the keyboards, and guitarist David Brockett pound out the music in true Queen style. The band sets the mood for Gary to do his thing.

It’s not too late to get in on Saturday night’s show. Tickets for the 8:00 pm performance can be purchased online at the Ticket Center for The Whiting. Or by calling (810) 237-7333 to speak with a box office representative. The Whiting is located at 1241 E. Kearsley St. in Flint. Take Exit 8A/Longway Boulevard off I-475 just north of Interstate 69.