The Whiting is one of the Jewels of Genesee County. Located on the Campus of the Flint Cultural Center. The performing arts center is home to the Flint Symphony Orchestra. However on Saturday night March 25th, it could have been Wembley Stadium or the Montreal Forum as One Night of Queen rocked the house. 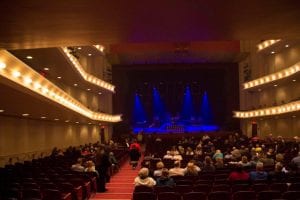 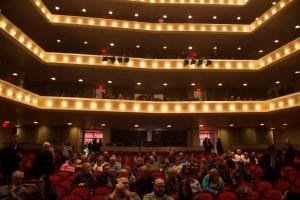 The James H. Whiting Auditorium (as the theater was originally named) was dedicated and officially opened in October 1967. A major renovation in 1999 restored The Whiting to its former glory, combining the charm and grace of old European theaters with the beauty and comfort of modern day. The 2,043 seat theater hosted Gary Mullen and The Works as they reprised Freddie Mercury and Queen in a 2-hour long show that thrilled the crowd. 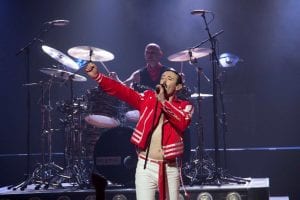 Gary’s stage persona is so reminiscent of Mercury you can easily transport yourself to the late 1970’s, early 1980’s when Queen was at their all-time best. The show opened with the hard pounding rhythms of “We Will Rock You” as Gary and the band took the stage. However, they jumped right into “Tie Your Mother Down” as the opening song. Followed by “Another One Bites the Dust” and “Somebody to Love.” Three songs in and the crowd was on their feet dancing and clapping to the beat. And Gary had shed the jacket prancing in white pants, a red tie belt, and the classic white t-shirt.

It is uncanny how much Gary invokes the spirit of Freddie Mercury. As he struts across the stage and strikes the memorable posses Freddie was known for, it’s easy to imagine Mercury reincarnated. As the band pumped out hit after hit, Gary interacted with the crowd to their delight. Imploring the mostly age 50+ fans to get off their assets and shake it. They did. 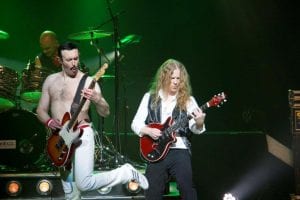 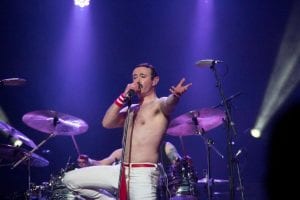 Tribute bands often come out and perform crowd-pleasing big hits with the emphasis on recreating the music. One Night of Queen delivers the full-concert experience. The band easily followed Gary as he improvised on some of the lyrics and extended versions of songs. They played deep-tracks like “A Kind of Magic” and “The Invisible Man” alongside favorites like “Killer Queen” and “Under Pressure.” 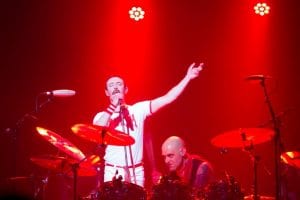 The full stage show on display. Gary danced, sprinted in place, climbed the risers, and engaged band members. Playing air guitar on the half microphone stand that served as sword prop, music wand, and male symbol. His actions spot-on with the memorable stage presence that Freddie Mercury commanded with his audience.

The music? Awesome! Returning after the mid-concert break for patrons to refresh their drinks and grab a snack, the show kicked into high-gear. “I Want it All,” “Keep Yourself Alive,” and “Fat Bottomed Girls” got the audience on their feet again. With just Gary and guitarist David Brockett providing acoustic accompaniment, Gary showed his fabulous voice on the pleading ballad “Love of My Life.” He nailed the difficult vocals in “Bohemian Rapsody.” Something not even Paul Rodgers would attempt when he fronted Queen for a short time after the death of Mercury.

Adam Lambert’s extravagant personality provides an entertaining version of the music during the current version of Queen. Having seen that act twice, I can honestly say I enjoyed Gary’s show much more.

Coming to The Whiting

Flannel and Furs Fundraiser is Huge Success, Despite Severe Weather