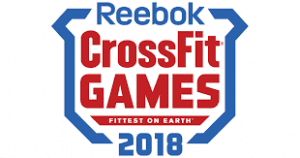 Last Friday marked the fifth and final week of competition in the 2018 CrossFit games at CrossFit Tuebor West. CrossFit Games Director Dave Castro made a historic announcement prior to the final workout reveal.  He told participants they would vote to determine which of three workouts would be used for week 18.5.

The athletes voted online and chose a simple timed workout progression. Starting with three power lifts and three chest-to-bar pull-ups. Then increasing to six each, then 9, 12, 15, etc. for as many repetitions as the athlete could complete in seven minutes. A brutal full body workout that left participants gasping for breath as time expired.

Crossfit Tuebor West athletes posted some impressive numbers. Unfortunately, none of the gym’s crew qualified for the regional competition. But, you would have never know that based on the high-fives, fist bumps, and hugs exchanged among the Tuebor West community men and women.

The Real Driving Force Behind CrossFit!

What I learned about CrossFit was truly an eye-opening experience. The Open competition was fun. If pushing your body to the limit of its endurance and collapsing afterward is your kind of fun. Remarkably after climbing up off the floor every competitor expressed exhilaration at the effort put forth. Most committed to doing the workout a second time before the weekly cutoff to try and improve their scores.

The physical fun turned to an emotional high as the community cheered each athlete. Imploring them to get 1 more rep before time expired. Yelling to push it harder when they took a brief rest. Then congratulating them on the effort put forth.

It was more about improving their individual performance then sitting at the top of the leaderboard as the scores posted each week.

Every registered CrossFit athlete has their own individual webpage that includes a brief personal bio. The page also includes a chart of their CrossFit Open Competition scores for as long as they have been competing. A win is when your rankings improved from the year before. A true sign of better fitness and the personal satisfaction of effort expended. We wanted to call attention to some significant highlights from CrossFit Tuebor West members. 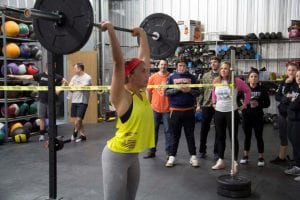 This is Chelsea’s fourth year of competition. Her first year she ranked 21,405th in the world in the Overall Women’s division. This year she sits 3,044th. Chelsea went from 335th in Michigan to an all-time high of 54th after this year’s event. She showed impressive gains in every ranking category. See Chelsea Holcombe’s CrossFit Profile. 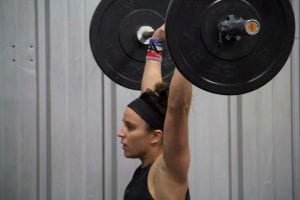 The 2017 CrossFit Games Open ended with Alecia in the 68,445th position worldwide in the Women’s division. That translated to 962nd in Michigan. For 2018 she earned a most improved recognition finishing 19,584 in the word passing almost 50,000 women in overall fitness. That also bumped Alecia to 303rd in the State. Do it again next year girl! See Alecia Green’s CrossFit Profile. 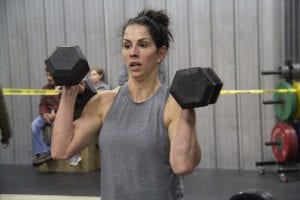 In her first full year of competition in the CrossFit Open, Jamie placed 13,258th in the world among Women age 35-39. Her rankings in the U.S. and Michigan, 9,096 and 203rd respectively. This year 879th in the world and 15th in the State of Michigan. As impressive as those stats are, Jamie is more proud of a personal accomplishment.

Before getting started in CrossFit Jamie was in a motorcycle accident. The injuries were so severe her Doctors said she may never walk again. Now she is among the 1,000 fittest athletes in the world for her age bracket. That is a testament to the full body training that CrossFit provides. See Jamie Lasco’s CrossFit Profile. 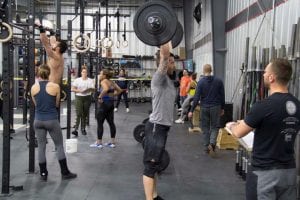 Matt is the husband of CrossFit Tuebor West’s owner, Jamie Lasco. Comparing Jamie’s rankings, Matt’s going to need to stay fit to keep up with her climb towards the top of the leaderboard. See Matt Lasco’s CrossFit Profile. 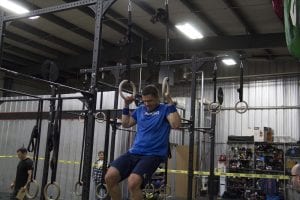 For the fourth year in a row, Mike has finished in the top 11 in the State of Michigan. Competing in the Men’s age 50-54 division he has placed in the top 40 in the Central East region for the third straight year. Mike’s son Matthew, who works out with him at CrossFit Tuebor West, is old enough to compete in the 2019 Open. Matthew inherited some good genes and will be a strong contender in the Boy’s age 14-15 division.  See Mike Manley’s CrossFit Profile.

For the second consecutive year, Jennifer has ranked in the top 20 in Michigan for Women age 45-49. Considering there are 222 women in that class in Michigan, that’s a top 10% achievement. See Jennifer Rosa’s CrossFit Profile.

At 65 years old, Joyce was one of the athletes we interviewed on an earlier visit to the gym. This five-foot, 100 lb. dynamo placed in the top 50 Women age 60+ in the State of Michigan. Way to go Joyce. See Joyce Brown’s CrossFit Profile.

Here is another look at the athletes of CrossFit Tuebor West as they compete against themselves to better themselves in the ultimate fitness competition.

If this activity appeals to you and you are looking for a friendly atmosphere to work on a fitness training program then checkout Crossfit Tuebor West. They are located at 14261 Torrey Road, Suite B in Fenton. Give them a call at (810) 354-5025. CrossFit Tuebor West offers a free one-week tryout. See how you can get yourself healthier and in better physical condition. Plus, make some new friends at the same time.