The NASCAR Xfinity Series ran this afternoon at Bristol Motor Speedway. The Fitzgerald Glider Kits 300 took the green flag shortly after 1:00 pm at the World’s Fastest Half-Mile. For the first time this season none of the regular Monster Energy NASCAR Cup Series drivers competed.

A warm 80-degree day with clear skies made for ideal race conditions. And it did not take long for action on the track to heat up. A caution on lap four was the first of 12 on the afternoon.

A total of 12 drivers finished on the lead lap. Here are the results of the NASCAR Xfinity Series race.

In the second half of the Saturday doubleheader, the NASCAR K&N Pro Series East competitors took to Bristol’s high banks for the Zombie Auto 150. Noah Gragson(54) sat on the pole with a speed of 126.578 mph, a new track record. Harrison Burton(12), last years Series Champion, was the previous record holder. Burton started seventh in the field of 28 competitors.

Just like the Xfinity race, the caution flew on lap 4 as Brandon Oakley(51) spun on the backstretch. Gragson led the first 50 laps of the event until a competition caution on Lap 51 brought the field to pit road. Tyler Ankrum(17) and Todd Gilliland(98) both took turns in the lead during the second 50-lap segment.

The Checkered Flag for the Zombie Auto 150

A wreck-filled final 50-lap segment featured three red flag stoppages. One for a piece of sheet metal that lodged itself under the safer barrier in turn 1. Track crews fought for 10 minutes to free a panel ripped off one of the crashed vehicles.  Gilliland fought through each restart to hold on for the win. Burton took second, Gragson placed third, Ankum finished fourth, and Brandon McReynolds(74) fifth. 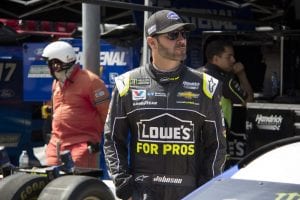 After qualifying 17th, Jimmie Johnson(48) will start at the rear of the field for Sunday’s Food City 500. Two of the tires Johnson qualified on lost air pressure and his team opted to change them out. The penalty for making unapproved changes to the car’s qualifying equipment? Relegation to the rear of the field. Johnson will have plenty of veteran company at the back of the pack. 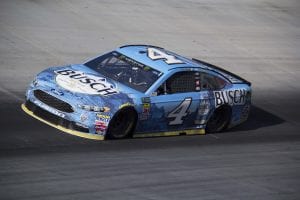 Kevin Harvick(4), a three-time winner so far in 2018, wrecked his primary car in the first practice session. Harvick’s team was unable to get their backup car through tech inspection in time to make a qualifying run. He will start in the rear as well. During Saturday’s practice runs Harvick had trouble finding speed. He will need some Sunday to avoid going a lap down early.

Joining them will be outside pole sitter, Kurt Busch(41) who crashed just prior to the end of the final Cup practice session. Busch also will start the race in a backup car. His crew pulled the engine from his primary car and put it in the backup during the Xfinity race. Working in the hot sun as there are no garages on the Bristol infield.

The starting time for Sunday’s race has been moved up to 1:00 pm from its originally scheduled 2 o’clock time. NASCAR and Fox hope to get the race in on what is forecast to be a rainy day in the Bristol area.