Car enthusiasts have a love affair with the Ford Mustang. Not just here at home but around the globe. Of the nearly 126,000 Mustang vehicles registered worldwide, Ford reported 81,866 of those were registered in the United States, meaning just over one-third of all Mustang registrations are occurring in export markets. Demand remains particularly strong in China, where Mustang was the best-selling sports coupe last year based on 7,125 registrations.

“We’re combining America’s favorite sports car with America’s top stock car racing series,” said Mark Rushbrook, global director, Ford Performance Motorsports. “Mustang always has been about affordable performance, which can be traced to innovations we’ve made competing in racing, like NASCAR. The Mustang is a perfect fit for our racing heritage today and tomorrow.” 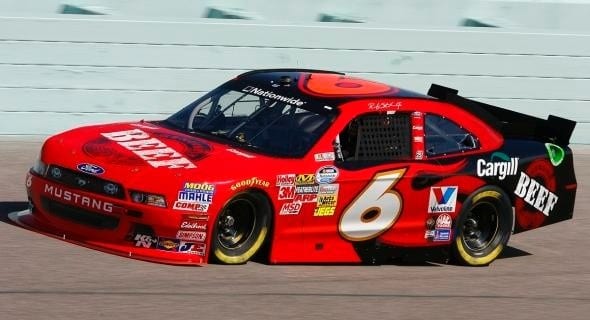 Will the current Xfinity Series model just transfer to the premier circuit? Not according to Rushbrook. “That car (Xfinity Series) was designed in 2011 around a previous iteration of the streetcar, so even the starting point of the streetcar is a different point. The character lines from a styling perspective that we want to put in to make it truly look like a Mustang are a little bit different, and the rest of the rules package that goes with it are different. We’ve obviously got that learning in our database, but it’s really more based upon what we know about our Fusion today and walking from there to the new Mustang.”

“This announcement makes me very happy,” said Edsel B. Ford II, a member of Ford Motor
Company’s board of directors. “Mustang is a car that is woven into the fabric of our country, and it’s only right that we put it on the track in NASCAR’s most visible series. I can’t wait.”

Blue Oval drivers have won four of the nine races so far during the 2018 season. In the points standings year to date, Fords sit in 7 of the top 11 positions. Including Joey Logano(22) 2nd, Clint Bowyer(14) 3rd, Kevin Harvick(4) 4th, and Brad Keselowski(2) 5th.

The Lasco Press will continue to track this story and provide updates as they become available. Ford is expected to submit the model design to NASCAR in June and could be ready to unveil the new car in August. Wouldn’t Michigan International Speedway be a great place to show off the new NASCAR Cup Series Mustang? Follow Sports Editor Steve Sweitzer on Facebook for all the latest NASCAR news.