On a day that looked impossible, Bristol Motor Speedway somehow made it work. With rain forecast for the entire day, the clouds parted just long enough to start the Food City 500. The Monster Energy NASCAR Cup Series received some intervention from Mother Nature to avoid a rainout. Monday would likely have been a challenge as well with a cold front expected to dump more rain and lower temperatures. 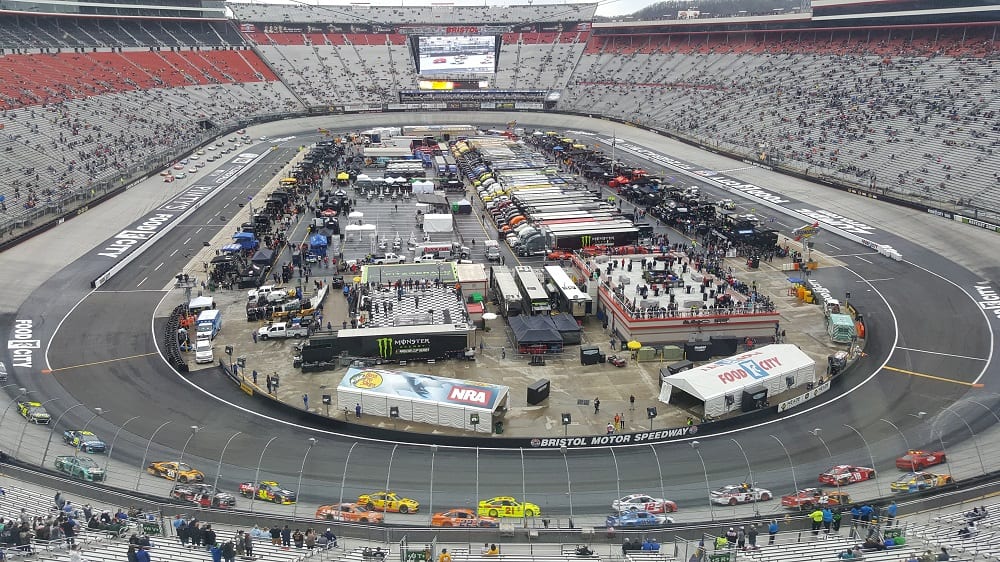 The “World’s Fastest Half-Mile” already has the world’s largest video board hung from four cables over the center of the track. With April weather always a gamble Bruton Smith has probably considered topping the track with the world’s largest retractable canvas roof.  Speedway Motorsports, Inc. does everything “World Class.” 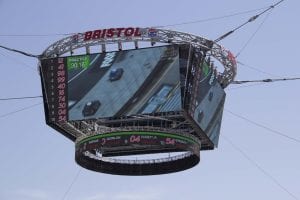 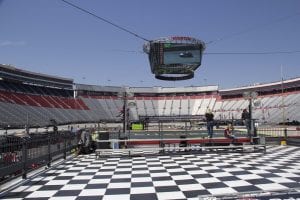 After qualifying 17th, Jimmie Johnson(48) started at the rear of the field for the Food City 500. Two of the tires Johnson qualified on lost air pressure and his team had no choice but to change them out. The penalty for making unapproved changes to the car’s qualifying equipment? Relegation to the rear of the field. Johnson had plenty of veteran company at the back of the pack. 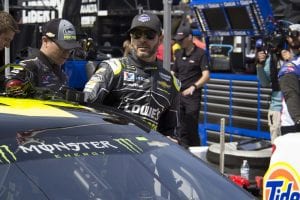 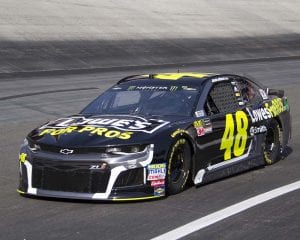 Kevin Harvick(4), a three-time winner so far in 2018, wrecked his primary car in the first practice session. Harvick’s team was unable to get their backup car through tech inspection in time to make a qualifying run. He started in the rear as well. 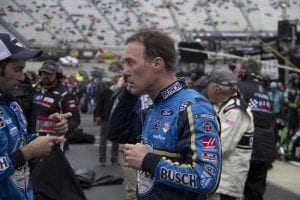 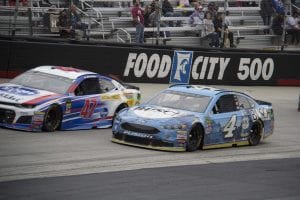 Joining them, outside pole sitter Kurt Busch(41). Who crashed just prior to the end of the final Cup practice session. Busch also started the race in a backup car. His crew pulled the engine from his primary car and put it in the backup during the Xfinity race. Working in the hot sun as there are no garages on the Bristol infield. 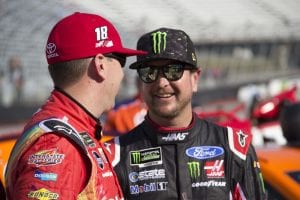 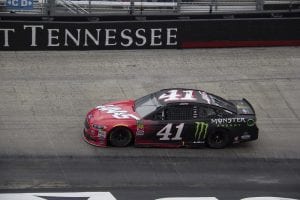 At the drop of the green flag, pole-sitter Kyle Busch(18) jumped out to a six car length lead. As it turned out, starting at the rear helped avoid trouble. On lap 3, Michael McDowell(34) spun near the front of the field. Chase Elliott(9), Daniel Suarez(19), and defending Series Champion Martin Truex Jr.(78) got caught up in the melee. 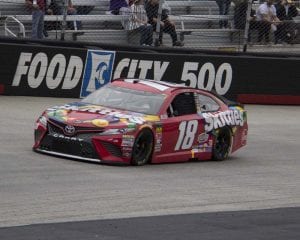 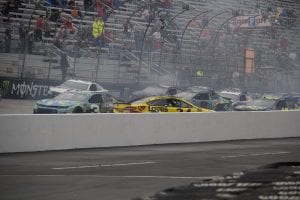 Truex managed to lose only one lap. However, the nose of his car was pushed in badly. He reported the steering wheel was knocked off center from the impact. 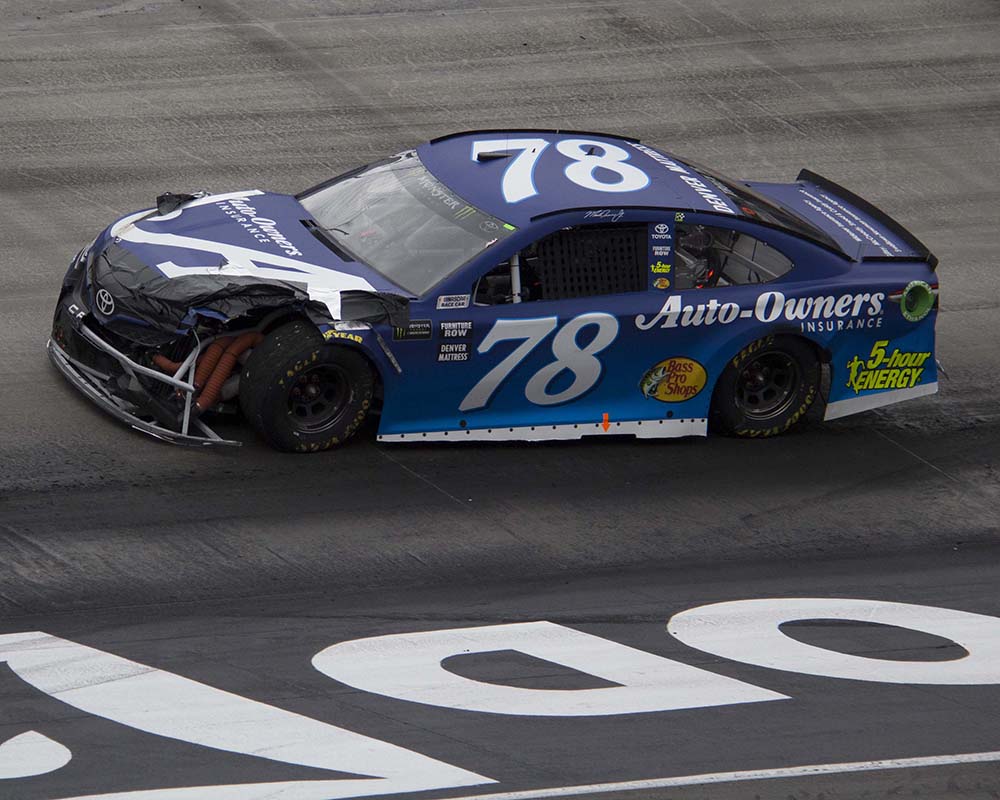 Elliott lost eight laps as his crew attempted to repair the damage. 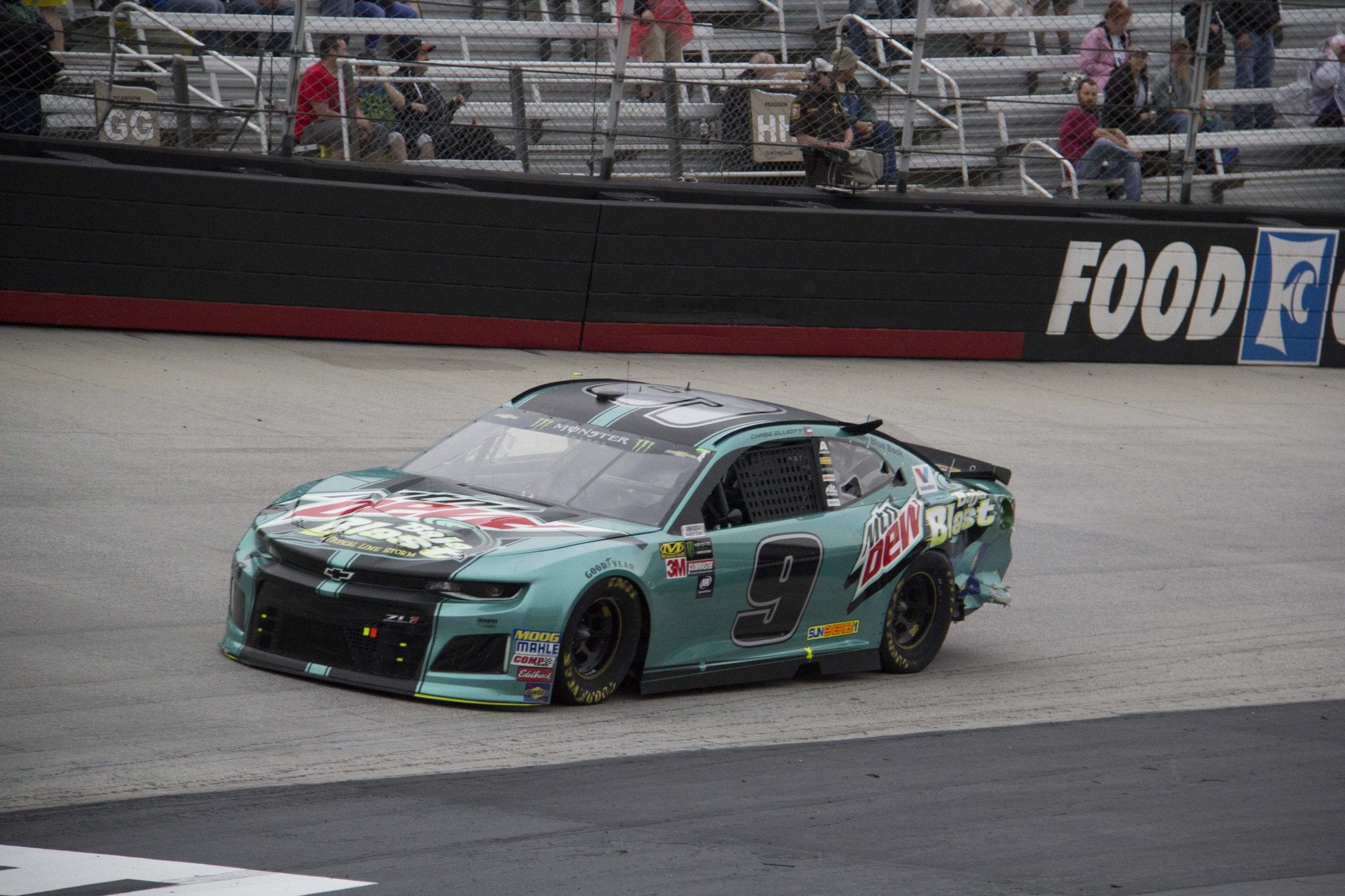 Stage 1 and Stage 2 are both 125 laps. The final stage, 250 laps. The race becomes official with the green and white checkered flag at the end of the second stage. Given the gray skies, a rain-shortened race was likely.

Fox Sports broadcasters Mike Joy, Darrell Waltrip, and Jeff Gordon were confident that if the race had long green flag runs the rain could be avoided. Siting the undocumented and very non-scientific weather phenomenon call the vortex effect. According to Waltrip the cars running on the tight half-mile track generate heat which spins upward like a corkscrew driving the clouds away.

Unfortunately, it didn’t work. The red flag was displayed on Lap 49 as rain again attacked the track with a brief shower. The jet blowers dried the track and the red was lifted after a 25-minute delay. Most teams took advantage of the yellow flag to pit and the race restarted with a new leader, Ryan Blaney(12). 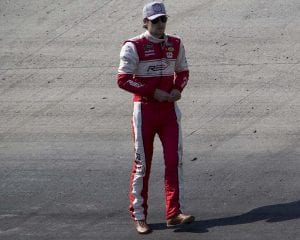 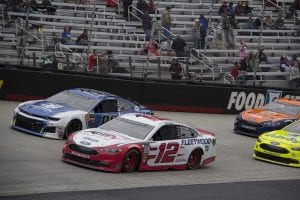 Team Penske drivers all showed good speed through the weekend. Late in Stage 1, they ran 1-2-3 with Brad Keselowski(2) in second and Joey Logano(22) in third. Blaney led for 99 laps until getting caught up in a wreck on lap 118 that ended his day. Chris Buescher(37) and Harrison Rhodes(51) were also involved. Neither car was able to continue.

The caution just before the end of the Stage presented a dilemma for the crew chiefs. Some cars chose to stay out and take the Stage points. Other pitted opting for track position at the beginning of Stage 2.

Kyle Larson(42) held the top spot for the start of Stage 2. Followed by Erik Jones(20), Jimmie Johnson(48), Kurt Busch, and Kevin Harvick(4). All three cars that started in the back of the pack moved to the top 5. 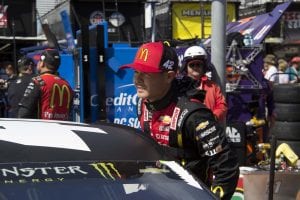 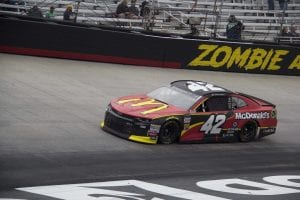 Rain interrupted the event for the second time on lap 165, 85 laps from being an official race. The jet dryers again did their job and the red flag was lifted after 26 minutes. Jones led the race when it went back to green. A loose race car caused him to quickly fall off the pace. Larson took advantage of Jones misfortune going to the front. Larson opened a huge gap on the rest of the pack. 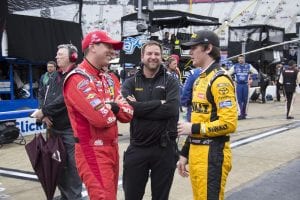 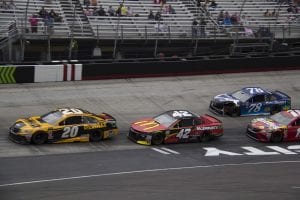 Rain returned and the race went red again on lap 204. This time the downpour completely soaked the track. Still, 46 laps from going into the books as an official race. The vortex having completely failed, forced NASCAR to postpone the conclusion of the race until Monday at 1:00 pm. 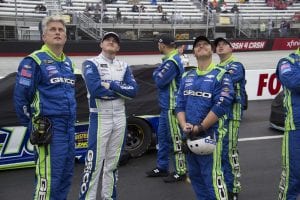 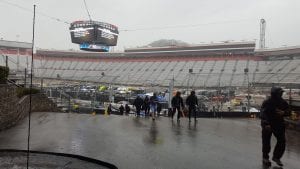 With temperatures 40-degrees colder than Sunday the cars returned to the track just after the 1:00 pm anticipated start time. A brief sleet storm passed and the jet dryers returned the track to race conditions. Cars had the time to pit before the green flag restarted the race. Larson chose to stay on the track while most everyone else on the lead lap pitted. 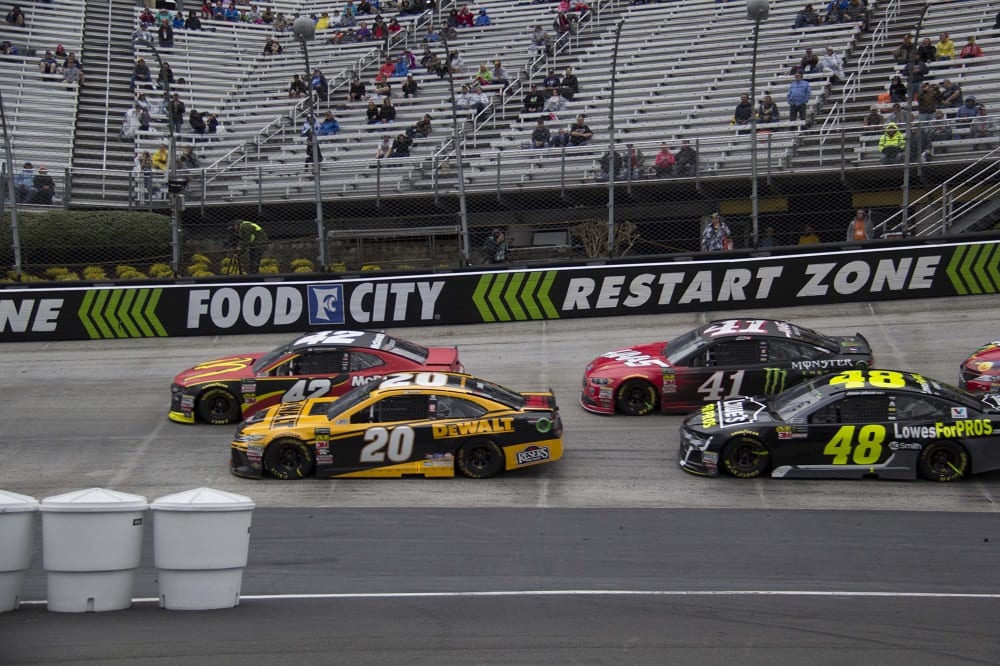 Back to green flag racing and Larson jumped out to a big lead. However, his tires began to fade just before the end of the stage. With seven laps to go Keselowski caught Larson and tapped his rear bumper. The nudge was enough to get Larson loose and Brad passed him. Keselowski held on for the stage win. 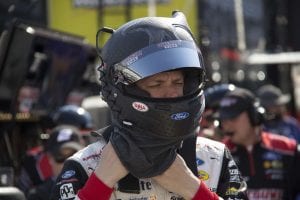 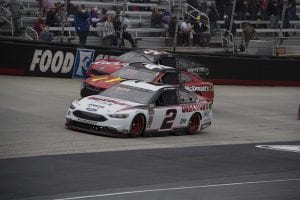 After stage ending pit stops Keselowski held the top position for the restart. Hamlin quickly passed him, but only held the lead until lap 266. A loose wheel brought him back to the pits and Keselowski resumed the lead. Larson moved to the front for a short time, until pole-sitter Kyle Busch took over the lead and began to show the speed that earned him the top starting position. 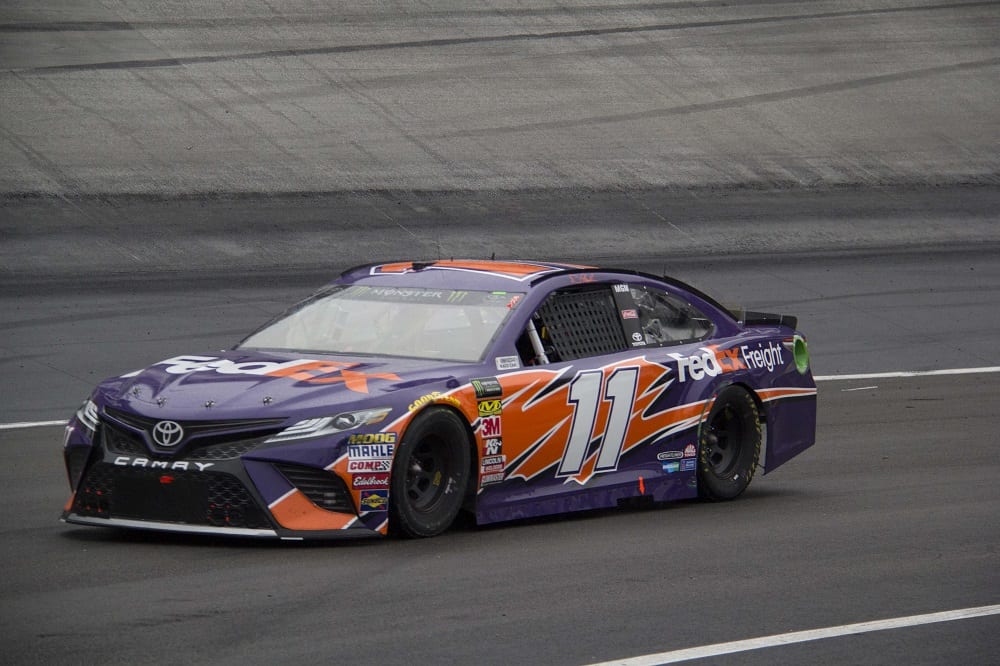 With 177 laps to go and Larson again in the lead, he spun after contact with Ryan Newman(31).

With rain moving towards the racetrack, the competition heated up. Kyle Busch drove to the front. He was followed by Larson, Ryan Newman(31), Johnson, and Wallace. The yellow put the field under caution with 110 laps to go as rain sprinkled lightly. NASCAR kept the cars on the track using the heat from their exhaust to keep the track dry. The green flag returned the field to racing with 101 laps left.

Kyle Busch continued to lead while Keselowski’s tires began to fade. Busch passed the 2 car with 63 laps to go putting Keselowski a lap down. A lap later Larson passed Busch for the lead.

Keselowski reported that something in the suspension of his car broke and he was going to try and ride it out to the finish. With 33 laps to go Keselowski’s left front tire went down. As he slowly circled the track the caution came out. After pit stops Larson led, Kyle Busch ran second. Johson held third, Stenhouse fourth, and Newman rounded out the top 5.

The green flew with 22 laps to go and Larson took the lead. Stenhouse moved into second and the battle for the top spot was on. After a bump from Stenhouse loosened Larson the pair drove side by side for the lead. Larson ultimately prevailed and moved away. Kyle Busch passed Stenhouse for second and began to chip away at the leader. Lapped traffic brought the two nose to tail. The bump and run put Busch back in the lead. Larson could not get back close enough to retaliate. Kyle Busch wins for the second time in 2018.

Results of the Food City 500 at Bristol Motor Speedway